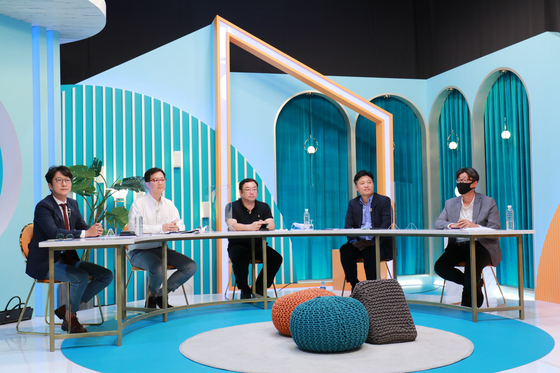 
Over a year has passed since the launch of the homegrown OTT (over-the-top) platform Wavve, and in that time the service has managed to garner over 10 million subscribers. According to the platform, the percentage of paid subscribers has increased by 64.2 percent over the year, but it did admit that it still has a long way to go to be able to equally compete with OTT giants such as Netflix.

Wavve is a local streaming platform that came about after a merger of two former local OTT services — Oksusu under SK Telecom and Pooq, jointly owned by the terrestrial broadcasters KBS, MBC and SBS — which was officially launched in Sept. 18 last year.

“An age has come in which mobile streaming services have become the main attraction [in the content market,]” said Chief Product Officer Rhie Sang-woo at an online press event on Monday. “People use more than one, at least two streaming services like YouTube, and it is certainly a memorable feat to have the number of paid subscribers increase by 2.8 times [compared to last May when the content was provided under Pooq]. According to our database, about 30 percent of our subscribers leave us after our three-month promotion event. We plan to launch new campaigns to keep hold of such subscribers.”

Although the officials did not disclose the specific number of paid subscribers amidst the 10 million subscribers, according to data from Nielsen KoreanClick, the platform recorded over 3.88 million monthly active users (MAU) in August, ranking second on the streaming platforms provided in Korea after Netflix, which surpassed 7.5 million.

The platform however, acknowledges that it still ultimately lacks its own original content compared to OTT giant Netflix or the upcoming Disney+, but asks users and investors to be more patient as it is still a “rookie” company.

“Other foreign platforms such as Apple TV, Disney+, and HBO Max are preparing their launches into the local market, and Amazon Prime is already here,” said CEO Lee Tae-hyun. “But whatever platforms come into the market, local content matters the most. [Even] on Netflix, local content dominates the Top 10 ranks. In the local market, the key [to success] is how much good local content the platform possesses. [However] we are aware of the fact that we do not have as much original content [as Netflix], but to be able to compete on an equal playing field, we are focusing on producing our own content.”

Starting with KBS drama series “The Tale of Nokdu” in 2019 in which the platform invested 10 billion won ($8.5 million) into the production, the platform plans to release a total of 12 original content series by the end of this year-- including seven original drama series with terrestrial broadcasters, four variety shows and one concert.

Despite the rosy future that the officials paint for their platform, it still has to take care of royalty problems raised respectively by the Association of Korean Buyers & Distributors of Foreign Films (KBDF) and the Korea Music Copyright Association (Komca). Earlier last month, 14 distributors in KBDF halted streaming of some 400 foreign films by local streaming services Watcha, Wavve and Tving in a protest against what they say is an unfair royalty system. Komca raised a similar problem in July, asserting that the local content services, except for Netflix, were using the music in their content without properly paying for the copyrights.

Regarding both problems, Wavve said that it is “ready to discuss the matters openly” with each association.

“However, it’s not easy because Komca is not as active in reaching an agreement,” said Chief Risk Officer Lee Hee-joo regarding the former matter. “This conflict involves more than a [mere] clash between OTT platforms and Komca. It’s a [more] universal issue between the media and the content.

“We truly respect the rights of the artists’ copyrights, but in order to provide them the profit they are guaranteed, the local OTT market needs to become [more] stabilized. Right now, the association’s demands are [a bit] hasty — the equivalent to counting its eggs before they've hatched.

After resolving the conflicts over copyright and royalty distributions and building a stable foundation for growth, the platform plans to apply for an initial public offering in 2023.

“By then we expect to secure 5 to 6 million paid subscribers and reap more than 500 billion won in revenue,” said the Chief Financial Officer Jeong Wook.