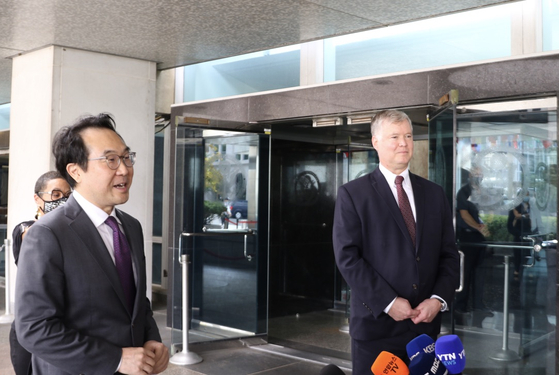 Biegun told reporters after the talks in Washington, "The United States and the Republic of Korea remain fully committed to diplomacy as a way to reach an enduring peace on the Korean Peninsula, to achieve denuclearization, to bring about a brighter future for all of the Korean people, and to bring about normalcy in the United States' relationship with the DPRK.” DPRK is the acronym for North Korea’s official name, the Democratic People’s Republic of Korea.

Lee, Seoul’s special representative for Korean Peninsula peace and security affairs, kicked off a trip to Washington Sunday, a visit which came after a South Korean fisheries official was confirmed to have been shot by North Korea last week.

“I very much appreciate the encouragement and the creative ideas that we discussed today,” said Biegun. “The U.S. and ROK cannot do this by ourselves. We need the DPRK engaged, and we remain open to the discussion with them when they're prepared.” ROK is the acronym for South Korea’s official name, the Republic of Korea.

Denuclearization negotiations between the United States and North Korea have been at a standstill since last year, and the two sides were not able to resolve differences in their last working-level talks in October 2019 in Sweden.

Biegun said he discussed with Lee the tragic killing of a fisheries official in the West Sea — something that was deeply disturbing to the Korean people and certainly to the United States of America.”

He added that they also “talked about constructive ways to continue to advance our diplomacy on the Korean Peninsula together.”

North Korea on Friday made an apology for the fatal shooting of the South Korean fisheries official, who was shot by North Korean soldiers on Sept. 22 after he went missing near the de facto inter-Korean maritime border in the Yellow Sea the previous day. The rare apology citing North Korean leader Kim Jong-un was seen by analysts as a move by Pyongyang to mitigate any international backlash over the shocking shooting, and a U.S. State Department spokesperson Friday called it a “helpful step.”

Biegun’s remark on discussion of “constructive ways” with Lee is seen to encompass Seoul’s proposal for an end-of-war declaration.

Lee told reporters at Dulles Airport in Washington on Sunday that he planned to discuss the issue of signing a declaration to officially end the 1950-53 Korean War, which ended in a ceasefire.

He said, “There were many occasions when the U.S. took interest in and reviewed the idea of officially ending the Korean War.”

President Moon Jae-in in a virtual address to the United Nations General Assembly on Sept. 22 called for global support for an end-of-war declaration to bring about “complete denuclearization and permanent peace regime on the Korean Peninsula."

Lee told reporters Monday that the latest meeting was the “best one among recent talks.” He stressed that cooperation between Seoul and Washington is more important than at any other time and that they will continue discussions in the future through various methods and opportunities.

Biegun, who doubles as the U.S. special representative for North Korea, has advocated a flexible policy toward Pyongyang and signaled that he is always ready to continue working-level talks with the North when he last visited Seoul in late July.

However, the latest report by a panel of experts published by the UN Security Council released Monday found that as of 2020, North Korea “has maintained its nuclear facilities and has continued to produce fissile material.”

It also found the North “has continued to violate Security Council resolutions through the illicit import of refined petroleum products through ship-to-ship transfers and direct deliveries.”

The report said that Ha Won Mo and Kim Hak Chol, representatives of the Korea Mining Development Trading Corporation (Komid), North’s state-owned arms dealer that is subject to UN sanctions, were in Iran as of the beginning of 2020.

The panel also found that Syria invited more than 800 North Korean laborers to work in the country in the second half of 2019, and some were reported to have worked at a Syrian surface-to-air missile unit.

Furthermore, deliveries of refined petroleum products to North Korea from Jan. 1 to May 30 “already far exceeded the aggregate amount of 500,000 barrels set by the Security Council as the annual ceiling for 2020.”

According to several assessments, North Korea “probably developed miniaturized nuclear devices to fit into the warheads of its ballistic missiles.” The panel also assesses, citing an unnamed country, that North Korea may seek to further develop miniaturization “in order to allow the incorporation of technological improvements, such as penetration aid packages, or, potentially, to develop multiple warhead systems.”

However, the Security Council is also taking into consideration humanitarian exemption requests related to Covid-19 relief and “exercised flexibility with regard to extensions of the exemption period.”

Lee and Biegun’s meeting in Washington comes amid a series of exchanges between South Korean and U.S. senior officials that have taken place in recent days.

Marshall Billingslea, the U.S. special presidential envoy for arms control, visited Seoul Monday and held talks with Ham Sang-wook, the deputy minister for multilateral and global affairs. They discussed ways for the two countries to cooperate in the field of disarmament and non-proliferation, including on the Treaty on the Non-Proliferation of Nuclear Weapons (NPT). Billingslea also made a courtesy call on First Vice Foreign Minister Choi Jong-kun and the two sides exchanged views on bilateral relations, according to the Korean Foreign Ministry.

U.S. Secretary of State Mike Pompeo is also expected to make his first trip to Seoul in two years next week as Washington pushes for support from allies amid intensified Sino-U.S. tensions.

Chinese State Councilor and Foreign Minister Wang Yi is also expected to make a visit to South Korea in mid-October on the heels of Pompeo’s visit to the region, which will also take him to Japan. Wang had been reported in Japanese media as planning a visit to Tokyo following the inauguration of new Japanese Prime Minister Yoshihide Suga.

In his opening remarks, Raab recalled that 80,000 British military personnel fought in the Korean War and said, “We are proud of those ties and we are proud of the solidarity. But we are also looking to the future, eager to take our friendship to the next level.”

He noted, “No other country has a voting record as close to the United Kingdom in international organizations as the Republic of Korea. And I think that speaks for the shared interests and also the shared values. And that is the reason why we’re so keen to come here and have these talks with you.”

Kang likewise said that Britain "is a key partner for us in all areas,” including trade, policy, culture and finance, and thanked Britain for being “steadfast toward our endeavors to bring about prosperity and lasting peace here on the Korean Peninsula.”