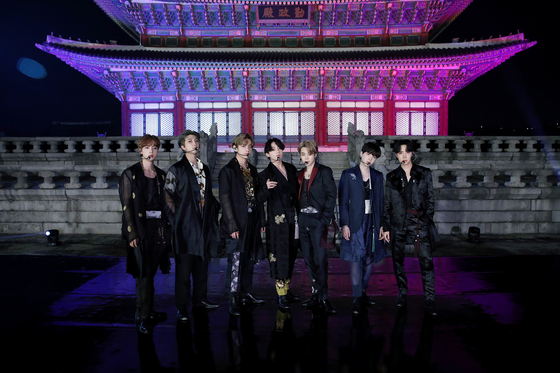 This photo, provided by Big Hit Entertainment on Sept. 29, 2020, shows K-pop group BTS posing for a photo in front of Geunjeongjeon Hall of Gyeongbok Palace in Seoul, South Korea, where the band filmed a performance for the "BTS Week" special on NBC's "The Tonight Show Starring Jimmy Fallon" in the United States. [BIG HIT ENTERTAINMENT]

The seven-member boy band sang and danced on a stage set like a roller skating rink as it ended its pre-recorded live performances aired every day since Tuesday, which included two unique performances in which it donned traditional Korean hanbok attire at South Korea's royal palaces.

In a tweet, Fallon thanked BTS and its fans, known as "Army," for watching his show.

"I want to sincerely thank @BTS_twt for choosing to spend a week with us. And to the Army...what can I say? You are a dream. You complete the picture. Keep shining. xo Chimmy," his tweet read.

BTS sang its hit song "Mikrokosmos" from its EP "Map of the Soul: Persona" the previous day on Gyeonghoeru, an iconic pavilion in Gyeongbok Palace. It was the second performance at the palace in the special weeklong series.

At the end of the performance, the computer graphic logo of BTS' fan club, Army, appeared in the night sky, and then Jimin, a member of the band, shouted, "We love you," in a display of his affection to Army.

On Tuesday, BTS, donning hanbok performed another hit song, "IDOL," in front of Geunjeongjeon Hall of the palace.

The show was designed to showcase different music performances by the band each night, including live performances, comedy bits and virtual interviews.