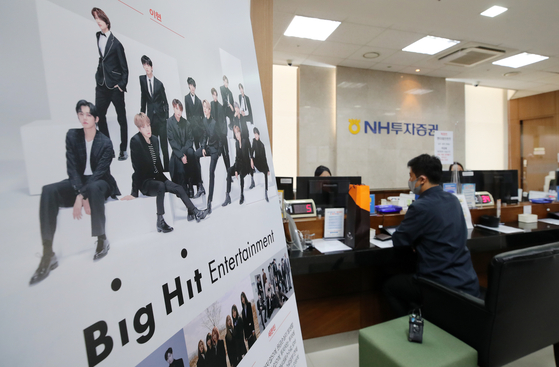 
Small investors got their chance at the initial public offering (IPO) by Big Hit Entertainment, creators of K-pop phenomenon BTS, but their fervor didn't exactly reach a fever pitch — even though many were members of ARMY, as BTS fans are collectively known.

On the first day of subscriptions Monday, 8.62 trillion won ($7.43 billion) in deposits were collected and the shares were oversubscribed at a rate of 89.6 to 1. Retail investors are being offered 20 percent of the IPO and could apply Monday and Tuesday.

Last week, institutional investors got their chance at 60 percent of the shares offered, and they were oversubscribed 1,117 times.

Retail investors showed more interest in the Kakao Games IPO, which closed its first day last month with a record-breaking oversubscription of 427.45 to 1.

“Individual investors that previously applied for public offerings of companies like SK Biopharmaceuticals and Kakao Games seem to have participated today. The other group of investors were BTS fans that deposited money out of love,” said Park Young-hee, an analyst at IBK Investment & Securities.

“That ARMY fan [who applied for the IPO] was me, but I could only subscribe for 1,600 shares due to lack of capital,” a BTS fan posted on Twitter Monday, sharing a screen image of her subscription results.

Previous experience with IPO stock price declines may have worried some individual investors, analysts said, considering that SK Biopharmaceuticals’ stock price hit its peak on the first two days of trading and has been in a standstill since.

“Retail investors were not as aggressive today, as many learned from SK Biopharmaceuticals and Kakao Games that prices do not always increase after the first day of trading,” explained Park.

Some decided to give up due to the relatively high IPO price of 135,000 won.

Competition might heat up on Tuesday, as subscriptions tend to surge on the second day.

A total of 1.42 million shares or 20 percent of the total IPO are being allotted to retail investors.

The second round of subscriptions will run Tuesday from 10 a.m. to 4 p.m. Deposited funds not used in the purchase of shares will be returned two to three days after the company goes public. Big Hit Entertainment will make its official Kospi debut on Oct. 15.

Big Hit Entertainment is the last big-name IPO scheduled for this year.

Millennials look to stock market as best chance for ROI