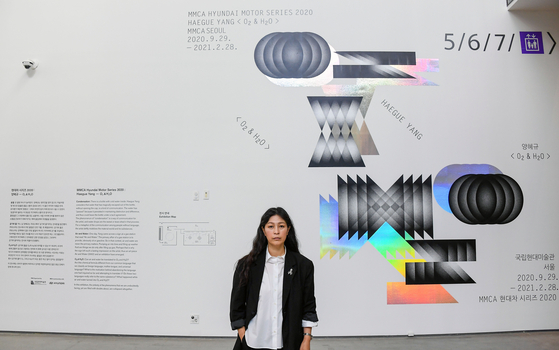 
Haegue Yang, who is now one of the world's most influential contemporary artists, but often faces complaints that her works are too difficult to understand, expressed the view that her works are not actually erudite but are "ambiguous." The ambiguity is inevitable because of the complexity of the world, which gets "harder to explain in summary if you have more understanding of it whether in terms of knowledge or information," the Germany-based Korean artist said in an interview with the Korea JoongAng Daily on Monday morning.

Yang started her solo show "O2 & H2O" at the National Museum of Modern and Contemporary Art Seoul last week. This exhibition is part of the annual "MMCA Hyundai Motor Series," which is a series of mid-career shows of established Korean artists. The title, which is the chemical formula for oxygen and water, resonates with "Air and Water," a conceptual artwork she created with two bookshelves in 2002 for an exhibition of the same title.

In this MMCA exhibition, the 49-year-old artist presents her latest "Sonic Domesticus" series, which are portable sculptures in the forms of everyday objects such as scissors enlarged to bigger-than-human sizes and covered with numerous metal bells. She also shows "The Intermediates" series created in recent years, which are a group of grotesque sculptures made of artificial straw and other materials. The two series are reminiscent of primitive idols, shaman rituals, folklore and, at the same time, machines.

The exhibits also include some works from a series of installations made of venetian blinds, which were created by Yang over the last 15 years and brought her international fame. In the Seoul Box of the museum stands the 10-meter- (33-foot-) high cylindrical structure "Silo of Silence – Clicked Core"(2017) which consists of two layers of blinds. The blue blinds installed in the core slowly rotate, while the black blinds installed in the outer circle are fixed, filling the surrounding space with ever-changing lights and shadows. In Gallery 5 are two works of "Sol LeWitt Upside Down," in which the cube-shaped original works of the American minimalist artist Sol LeWitt (1928-2007) are re-created with white venetian blinds in different scales. 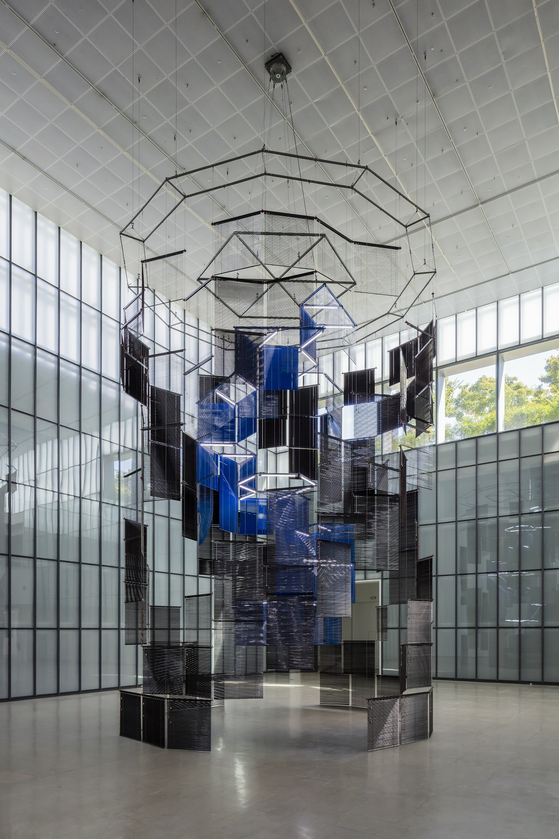 
Some works being exhibited are related to the unique geopolitical situations of Korea such as the digital collage wallpaper piece "DMZ Un-Do" and the sound work "Genuine Cloning." The latter plays a recording of the moment when the North and South Korean leaders conversed far apart from the press corps during the live broadcasting of the April 2018 inter-Korean summit. The works plays all the recorded sounds amid the inaudible conversation including birds' songs and camera noises. To this, Yang adds her voice, replicated through artificial intelligence technology.

"The bird sounds in 'Genuine Cloning' show that there is nature silently behind the scenes of such intense moments in human history," she continued. "I'm interested in the shadows and peripheral things. However, I am not interested in only those things. To look at a shadow, you also should see the main body."

Yang explained that she is viewing the era of the Covid-19 pandemic in a similar way, adding that she takes into account the theory of the Anthropocene. The theory argues that we are now in a geological epoch, which is totally different from the former epoch and is characterized by significant human impact on Earth's geology and ecosystems. The artist said she views the world and its phenomena no longer with a classic, humanistic perspective. A new perspective can be both bigger and smaller than the humanistic perspective, because it embraces non-human nature, while it can split the unit of an entity into molecules, as some people perceive coronavirus as an entity.

Asked whether it is related to the fact that her MMCA exhibition has the title "O2 & H2O" instead of "Air and Water," Yang said, "Yes. And the title is scientific language, which is gaining more importance in this era." 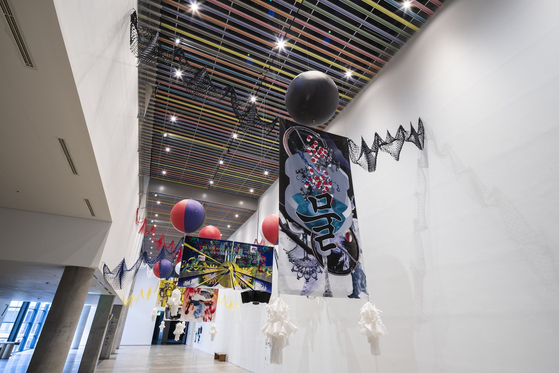 
Regarding the crisis of globalism amid the pandemic, Yang said, "Everybody has talked about globalism but the links for globalism have been very weak and shallow."

"We have only thought about market-oriented globalism," the artist also said. "But globalism also includes anthropological aspects. [Replying to the KJD's question about what Western people think about the bell-covered sculptures, while Koreans recall gut, or traditional shaman rituals.] In Western pagan culture before Christianity, metal bells were widely used for rituals and those traditions persistently remain in rural areas."

"And, in any country it is children that first and most actively react to the 'Sonic' sculptures," she continued. "They are animated by the viewers. [The sculptures are portable with wheels and the bells ring when they are moved.] It can be associated with animism [the primitive belief that creatures including inanimate objects all possess a spiritual essence.]" 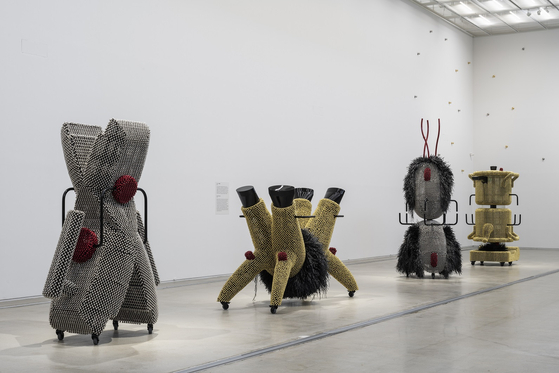 A view of the installation "Sonic Domesticus" 2020 by Haegue Yang at MMCA Seoul. [MMCA]


The clothes horse, which has repeatedly appeared in Yang's works from her early stages to the two "Sonic Clotheshorses" pieces now on view at the MMCA Seoul, is also related with animating, animism and "life" according to the artist.

"When I lived in a poor, hillside village in Ahyeon-dong, crowded with small houses, every family put their clothes out on the streets to dry because their homes didn't have enough space," she said. "They were the signs of life. It was a place where the signs of life were excessively exposed. When I had an exhibition in an abandoned house in Incheon, I had to start with disposing of piles of waste there. But when I cleaned out the space, I felt it was even less like a home. So, I made a work with a clothes horse I discovered in the village and put it into the space as the element of life […] to give life to the space."

"Some people compare clothes horses to their families; everybody has one and everybody knows it but they are reluctant to show them to guests, because they are intimate part of their life" she added. "The clothes horses are folded and unfolded as if they are breathing."

She is currently working as a professor of Fine Arts at the Stadelschule in Frankfurt, her alma mater, and will soon return to Germany after an exceptionally long stay of eight months in Korea. She has been installing four exhibitions during that time. "I have to organize three of them far off, which was unthinkable before the pandemic," she said. "This pandemic will make new culture. New things can be made, only when the old things that occupy the current spaces disappear. New substitutes will appear in the emptied spaces."

Yang, who ranked 36th in the London-based magazine Art Review's "Power 100" list in 2019, has a number of current and upcoming solo shows at major museums around the world. Among them, "Handles," already running at the MoMA in New York, will continue through Nov. 15. "Haegue Yang: Emergence" started last week at the Art Gallery of Ontario in Toronto and "Haegue Yang: The Cone of Concern" opens next week at the MCAD in Manila. In addition, "Haegue Yang: Strange Attractors" will kick off at Tate St Ives in the British port city on Oct. 24.

Meanwhile, along with the opening of the MMCA show, the first anthology on Yang in Korean language, "Air and Water: Writings on Haegue Yang 2001-2020," was co-published by the museum and Hyunsil Publishing. The anthology includes 36 selective writings by art critics, art historians, curators, journalists and other artists about the artist over the last two decades.