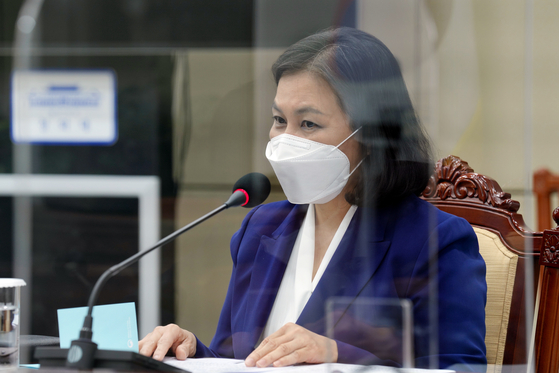 Trade Minister Yoo Myung-hee attends a strategy meeting on Monday at the Blue House hosted by President Moon Jae-in to support her campaign to become the new head of the World Trade Organization. [YONHAP]

“We must continue our campaign of emphasizing Yoo as the best candidate to reform the WTO,” Moon was quoted as saying during the meeting by presidential spokesman Kang Min-seok. “During the remaining election period, I will do my best to support Yoo by sending letters and making phone calls to state leaders from around the world.”

Last week, Yoo and Nigeria’s Ngozi Okonjo-Iweala advanced to the final round of the election for director-general of the WTO. A final decision, requiring a consensus of 164 member countries, is expected on Nov. 7.

The strategy meeting, which lasted one hour, included Yoo and other senior members of the administration such as Foreign Minister Kang Kyung-hwa and Presidential Chief of Staff Noh Young-min. Moon said Prime Minister Chung Sye-kyun and the ruling Democratic Party (DP) Chairman Lee Nak-yon should also actively support the campaign. 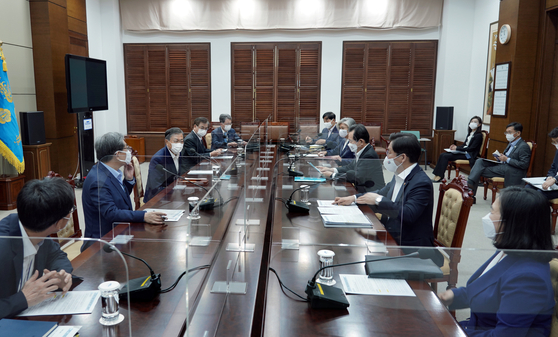 
According to Kang, Yoo appreciated Moon’s support. “The final round of the voting takes place from Oct. 19 till 27,” Kang quoted Yoo as saying. “I will concentrate my campaign on winning votes evenly from different regions and to become a secretary-general who receives support from all WTO members.”

“It is crucial for Yoo to stress that she is the best candidate to restore multilateralism,” Deputy National Security Advisor Kim Hyun-chong, Yoo’s predecessor, was quoted as saying by Kang.

A senior presidential aide said Yoo was an underdog candidate, yet managed to advance to the final round.

“Frankly speaking, she did not start the race as a leader. She was a pursuer,” he said. “What’s clear is that she made a great accomplishment and her popularity is still growing [...] Yoo will do her best to make sure that no country vetoes her, and the government will do its best.”

According to foreign media, China is reportedly backing Yoo’s rival, Okonjo-Iweala, and Japan has traditionally opposed candidates from Korea.

The race started with eight candidates. The first round in September eliminated three of them, and the second round eliminated another three.

Yoo will depart for Europe on Tuesday to concentrate her final days of the campaign in the region. Throughout her campaign, Yoo has already visited Europe three times as she lobbies to secure the countries’ votes. The WTO is located in Geneva, Switzerland.

Yoo passed the civil servants exam in 1991. She has maintained a successful career as a public servant in the Trade Ministry. During the Park Geun-hye presidency, she served as the Blue House spokeswoman for foreign media for one year in 2014.

But she submitted her resignation in November 2018, worrying that she had no chance of promotion in the Moon administration. Her husband was a former lawmaker in the main opposition party, and many said that must have also affected her decision.

Moon, however, turned down her resignation and promoted her to trade minister. Sources said Kim Hyun-chong, her predecessor, strongly recommended her.

After becoming the first woman to serve as Korea's trade minister, Yoo led the country’s victorious 2019 appeal to the WTO in a dispute over import bans and testing requirements it had imposed on Japanese seafood in the wake of the 2011 Fukushima nuclear disaster. In 2018, a WTO panel had supported Japan, ruling that Korea was wrong to keep its trade restrictions, but Yoo managed to overturn the verdict.

According to Kang, the presidential spokesman, Moon has so far sent letters to 35 state leaders and spoken with five others by telephone to seek their support for Yoo.