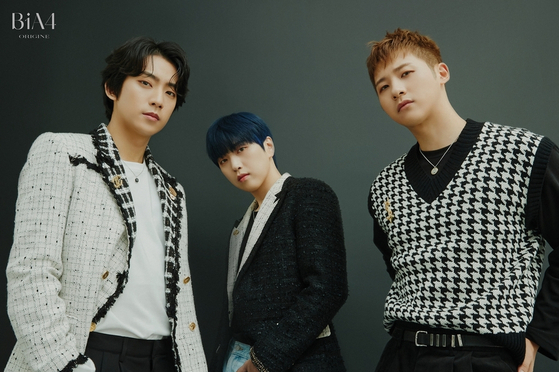 
B1A4 will be releasing a new album for the first time since former members Jinyoung and Baro left the boy band's agency WM Entertainment in 2018.

According to their agency WM Entertainment Thursday, the band is releasing their fourth full-length album “Origine” on Oct. 19.

“Origine” is the band’s first EP in three years since its last EP “Rollin’” in 2017, and its first with remaining members Gongchan, CNU and Sandeul.

All 12 tracks on the album were composed and written by the members, and it also includes solo tracks.

B1A4 debuted in 2011 as a five-member group and is recognized for its exceptional music producing skills. They have numerous hit songs such as “What’s Happening," “Solo Day,” “Lonely,” “Baby Good Night” and “A Lie.”

After Jinyoung and Baro left the agency, the group has been focusing on solo activities as CNU enlisted to serve his mandatory military service in 2018. He was discharged in August this year.