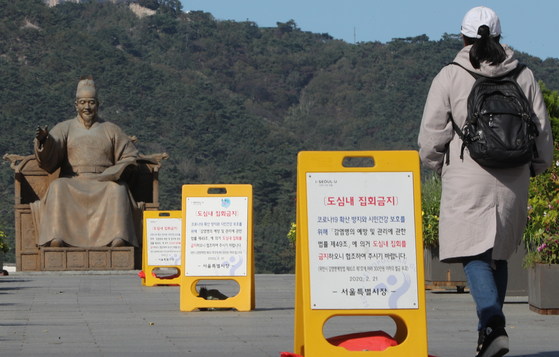 Korea added 69 new cases of the coronavirus Wednesday, dipping back below 100 as the nation goes into a three-day holiday.

The Korea Disease Control and Prevention Agency (KDCA) announced the drop Thursday morning, saying 60 were domestic infections and nine were imported. There were 114 new cases Tuesday, the first time in a week that Korea had seen a triple-digit daily Covid-19 number.

Among Wednesday’s domestic infections, 22 were in Gyeonggi, 19 in Seoul, seven in Daejeon, five each in Busan and Incheon and one each in North Gyeongsang and South Gyeongsang.

A cluster at a hospital in Uijeongbu, Gyeonggi, added nine cases to reach a total of 35, health officials said. Of that figure, 16 were hospitalized patients, while 16 others have been identified as caretakers and three as the hospital’s nurses. Thirty-two people were either patients hospitalized on the fifth floor of the facility or their caretakers. 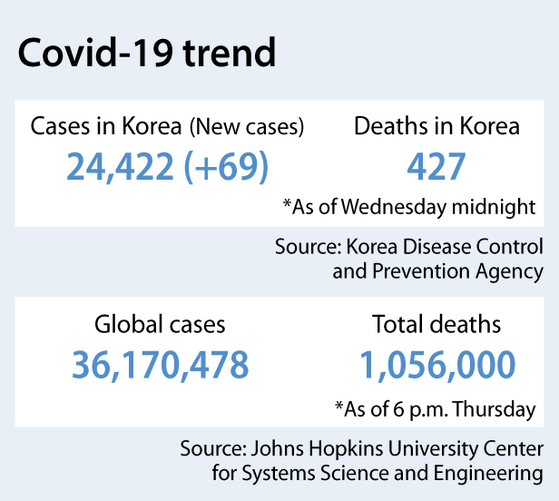 No serious clusters have emerged this week after last week’s five-day Chuseok holidays, but health authorities say they fear the virus may be quietly spreading, which is why members of the public are strongly encouraged to keep vigilant and practice social distancing.

With Hangul Day coming this Friday, a national holiday when Korea celebrates the invention of the Korean alphabet, health authorities Thursday once again urged the public to stay indoors and keep away from crowds.

Some 95,000 people, however, are expected to flout those guidelines this week as they travel to the southern resort island of Jeju. The Jeju Tourism Organization announced that from Thursday to Sunday, that number of people are expected to land on the island. That is 30 percent fewer than the same period last year, yet still a worrying number when considering the ongoing pandemic.

There’s also the possibility that anti-Moon Jae-in civic groups may try to protest in Gwanghwamun Square, central Seoul, on Friday, which the police and Seoul Metropolitan Government have vowed to block.

Yoon Tae-ho, an official at the Central Disaster Management Headquarters, implored the public Thursday to abide by the government’s preventive measures for the virus, reminding them that the entire nation is subject to so-called Special Prevention Period measures, which are similar to Level 2 of the three-tier social distancing system.

The Special Prevention Period, which began on Sept. 28, is expected to expire Sunday midnight, after which a new set of measures will go into effect from Monday.

What those new set of measures will be is not yet known. Yoon said an announcement will be made Sunday after health officials spend more time monitoring Chuseok’s impact.

Among Wednesday’s imported cases, three each were from Indonesia and the United States, and one each was from the Philippines, Myanmar and Poland.

Two people died Wednesday, raising total deaths from the coronavirus to 427, while 129 people recovered, bringing total recoveries to 22,463. As of Wednesday at midnight, Korea had counted 24,422 Covid-19 patients in all.

On a separate note, an Incheon court Thursday sentenced a 24-year-old former hagwon (private cram school) instructor to six months in prison for lying to epidemiologists about his occupation and where he went before he tested positive for the coronavirus in May.

At the time, the instructor told contact-tracers he was unemployed, disguising the fact that he teaches young students. That delayed efforts by government officials to contact his students and warn them to self-isolate, eventually leading to a chain of infections that transmitted the virus to over 80 people across the country, over 40 of whom were grade-school students in Incheon.

The Incheon instructor himself was apparently infected while partying in Itaewon, central Seoul, on the night of May 2 and in the early hours of the next day, the same time that the coronavirus was silently spreading in clubs that mostly catered to gay people.

While prosecutors had asked the court for a two-year prison term, the Incheon District Court said Thursday that it took into account the fact that he appeared to have lied because he was “afraid that his sexual identity might be revealed.”