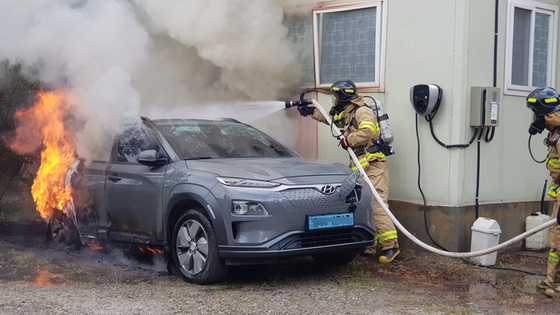 This is 70 percent of Hyundai's Kona EVs sold internationally, as of the first half of 2020. In total, 77,067 Kona EVs sold will be subject to the expanded recall, which applies only to those manufactured in Korea.

Cars will be recalled in one region after another, beginning as early as next week. A total of 77,748 Kona EVs were sold outside of Korea, with Europe accounting for the largest regional share at 48 percent.

The automaker plans to investigate any anomalies in the batteries after updating its battery management system, and says it will replace them if there are any signs of damage, including significant changes in battery temperature.

Including the latest incident in which a Kona EV burst into flames in a Daegu parking lot, there have been 12 reports worldwide of the vehicles catching fire, according to a report submitted to a Democratic Party (DP) lawmaker from the Korea Transportation Safety Authority.

The Kona is the second-best-selling EV in Korea after Tesla’s Model 3. More than 100,000 Kona EVs have been sold worldwide since 2018.

Battery maker LG Chem and Hyundai Motor are at odds regarding what has caused the vehicles to catch on fire.

The Transport Ministry suspects a defect in the battery’s separator may have caused a short circuit, subsequently causing the battery to catch fire. LG Chem, which supplies the battery for Hyundai Motor EVs, has strongly protested against the blame being put on its product.

LG Chem released a statement on Oct. 8, immediately after Hyundai decided to recall all Kona EVs in Korea, arguing that the announcement was made without confirmed evidence that pinpoints a default in the batteries to be the cause of EVs catching fire. The battery maker said it will actively cooperate with Hyundai Motor to investigate the cause.

Hyundai Motor may be rushing to recall all its EVs in a bid to tamp down growing consumer distrust surrounding the safety of its electric-powered vehicles, experts said.

Hyundai Motor Chairperson Eui-sun Chung proclaimed in July that 2021 will be a watershed year in the company's push for EVs. Hyundai plans to sell one million electric vehicles with the goal of reaching 10 percent of the global market share by the year 2025. There are 23 models of EVs scheduled for launch over the next five years.

But the automaker's recent difficulties are unlikely to subside soon. Customers have called Hyundai’s recall measures insufficient for only updating the battery management system, and not the battery itself.

More than 1,000 owners of Kona EVs have reportedly signed a petition to take collective action against the company, according to an online community of EV drivers in Korea.