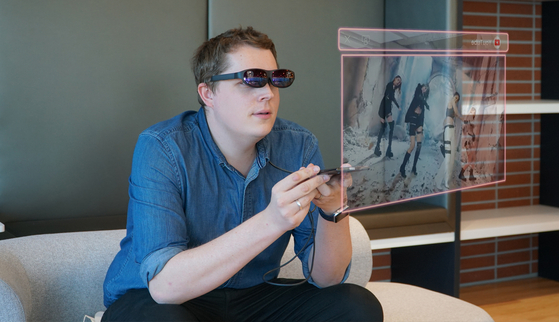 This computer-generated mock-up shows an actual screenshot from LG U+'s U+ Real Glass AR glasses superimposed on an image of the reporter using the glasses at the Korea JoongAng Daily office in western Seoul on Oct. 7. [JEON TAE-GYU/YUN YOUNG]


Augmented reality (AR) promises to provide a simultaneous view of both the physical and digital worlds, allowing users to immerse themselves in virtual experiences without having to check out of the real world.

After the brief excitement surrounding Google's Google Glass back in 2013, AR glasses have disappeared into the industrial world, offering business solutions but nothing for the average consumer. A new set of AR glasses sold by mobile carrier LG U+ and manufactured by Beijing-based developer Nreal is the first serious effort to bring AR hardware to the mainstream in Korea.

The launch of the headset, which went on sale in August for 699,000 won ($604), could serve as a critical test for AR glasses as a concept, as it is the world’s first mass-produced AR glasses designed entirely for consumers. The first batch of 1,000 U+ Real Glass units sold out within one month of the initial release.

To experience everything the device has to offer, the Korea JoongAng Daily paired the glasses with a Samsung Galaxy Note20 with 5G turned on so that data speeds and lagging were not a concern.

One of the biggest issues AR glasses face is looks. An ugly phone or unsightly smart watch might not be ideal, but it's easy to ignore. AR glasses are going on your face.

The U+ Real Glass is not as clunky as a virtual reality headset or other existing industrial AR glasses, but it definitely is an acquired taste. Put simply, nobody is going to miss the fact that you're not wearing a normal pair of glasses.

Weighing just 88 grams (3 ounces), the glasses aren't heavy, but they are still chunky with a large plastic rim across the top housing three cameras and multiple sensors, looking more like a bulky pair of goggles than chic sunglasses.

The glasses' relatively compact design is possible because it uses a smartphone as a controller, removing the need for batteries, a modem and processing unit in the glasses. But the payoff is pretty huge: A physical cable runs from the arm of the glasses to the smartphone.

The design certainly isn't perfect, but it is promising. The glasses may not look the part yet — and the thick cable running to the phone feels very outdated — but Nreal is clearly already thinking about how to make it as compact as possible and that will only improve with time. 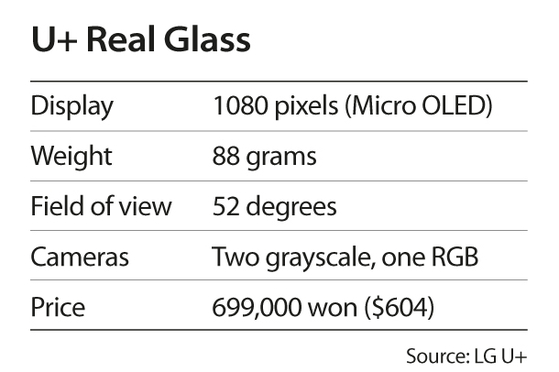 Before we dig into the image quality and the content consumption experience with the Real Glass, a more fundamental issue needs to be addressed.

The device is controlled by moving the smartphone around in the air to control a pointer visible in AR. The smartphone interface also includes buttons to zoom, recenter the display, lock it to a specific position and a large square that the user can use like a laptop touchpad.

But that system is far from perfect. It regularly didn't work, the pointer disappeared, the display jumped round and disappeared from view and the zoom button never really did anything.

The home screen shows a line of apps rearranged vertically across the user's field of view, but that was the only thing that really seemed to have been customized for the glasses. Open any app and it appears as a horizontal rectangular box like a phone screen floating in midair.

Once you've got past all that, however, the U+ Real Glass starts to come into its own. Both YouTube and some AR games can be expanded to "full screen" mode, offering a much broader view of the content.

To test this out, we chose a music video from girl group Blackpink.

Choosing the song wasn't easy. When navigating the YouTube app, it's still a small rectangular box. Typing in "Blackpink" was possible on the smartphone's display, but scrolling down the list wasn't easy. We were aiming for "Ddu-du Ddu-du," but ended up settling for "Kill This Love."

Once you've got Blackpink playing (other music videos are available), the result is pretty satisfactory. The OLED display definitely has room to improve from the current 1,080 pixels, but it still looks good. In a dark room, detail is easy to see, although the bright light can really ruin the visual.

The field of view is relatively narrow, at 52 degrees, so it's not an especially immersive experience. But again, the potential is clearly there.

LG U+ is currently working on a range of applications to take advantage of the AR functions. Currently there is only one option, which displays videos from multiple angles, but as more content is rolled out the technology will continue to develop.

Streaming of the customized content hinted at what the future of AR glasses could deliver — hologram-like content that responds as the user moves. LG U+ isn't quite there yet, but it has taken a step in the right direction.