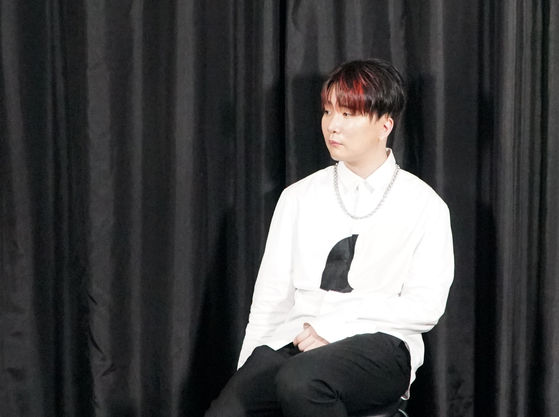 Singer-songwriter Yoon Hyun-sang sits down for an interview with the Korea JoongAng Daily. [BYUN JU-YEON]


K-pop often conjures thoughts of acrobatic dance moves and bass-heavy hits performed by the many members of the boy bands and girl groups Korea has to offer, but the pool of talented indie singer-songwriters is just as rich and colorful as the sounds they create. Unlike many of the idol bands that perform songs written and produced by others, these singers take their music into their own hands and establish fan bases solely based on their songs. Through this series, the Korea JoongAng Daily will sit down with up-and-coming solo indie singers and learn the stories behind their lyrics, while also finding out more about their lives, loves and interests.

When singer-songwriter Yoon Hyun-sang debuted in 2014, he introduced himself as “A vocalist with a feel and color.” Six years have passed, and he says he can finally call himself a singer, not just a vocalist.

Yoon’s path to becoming a singer began in 2012 when he became one of the top seven contestants in the first season of TV channel SBS’s audition program “Kpop Star,” impressing a panel of judges consisting of some of the biggest names in K-pop. What impressed the judges, as well as the viewers, was not only the tenderness of his velvety voice, but also his command over his vocals that was only heightened by the songs he had composed.

As a singer, he immerses himself into the emotions of the song so truly and deeply that what he emanates dyes the listeners’ mood in the same color as his own, whether it’s a song about love, heartbreak or even a hangover. As a songwriter, he employs the utmost scrutiny and intention to bring out the best from his songs.

“I like to think that I’m ambivalent,” Yoon said. “There is a side of myself when I’m making music and a side of myself outside of that, and they’re different. I focus on the emotions of the song when I’m writing it. But just because you listen to a love song, it doesn’t mean you’re thinking about the undying emotions of love throughout the 24 hours of the day, right?” 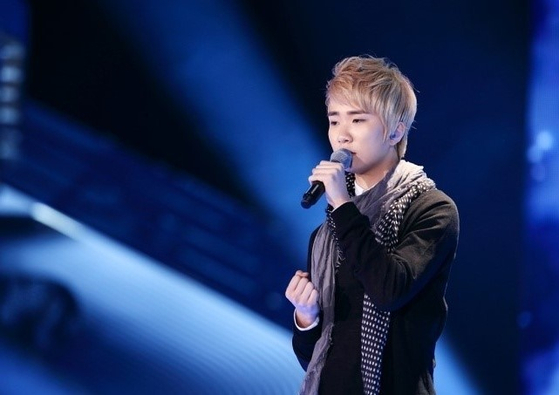 
It took him two years after appearing on the audition show to debut with his EP “Pianoforte,” but when the time came, he was more than ready for his entrance onto the music scene.

Not only did he write every song on the six-track EP himself, but the lead track “When would it be” also caught the attention of singer IU — who was also signed at Yoon’s then-agency Loen Entertainment. When IU asked if she could have the song to release herself, the agency suggested that the two singers duet, leading to a collaboration between Yoon and one of the most popular singers in K-pop.

Yoon has since been building his repertoire with his own songs that span across a variety of genres, including folk, ballad and R&B, “anything except for EDM and hip-hop,” according to the singer. He held his very first solo concert in 2018 and released his single “Mild” in July, promising fans that he will be releasing an EP by the end of this year, filled with songs that he has, of course, written himself.

His songs are loved for their casual and easygoing mood, along with a touch of uniqueness that comes from his one-of-a-kind voice. Even with celebrity endorsements from actor Lee Min-ho and singer Dino of Seventeen, Yoon remains humble.

The Korea JoongAng Daily sat down with Yoon, to delve deeper into his songwriting and who he is outside of music. The following are edited excerpts.

What made you participate in the audition show “Kpop Star” and become a singer?


Since I was younger, honestly, I wasn’t anything else that I could do except for music. From a very young age, I just dreamed that one day I would become a singer.

It took little time for me to debut after the show, but I felt more worried about not being totally ready as a singer rather than not being able to debut straight away. It actually gave me time to write songs and see things in a different light, in a broader light. I think it all helped me.

Can you name the three songs that you think will give listeners a good overview of your music?


I would recommend “My memory warehouse,” “Silhouette” and “Dancing Universe.” Oh, can I add one more? It would also be nice to add the latest release, “Mild.”

I think a lot of people think that singer Yoon Hyun-sang only sings slow-tempo ballad songs, but I’ve been trying to make a variety of music that shows the different colors of who I am. I want people to notice that, so I’ve chosen these songs, which are quite different from each other. 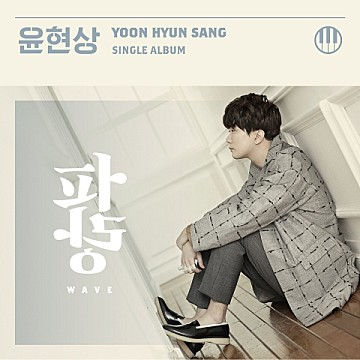 Do you have a favorite among your songs?


I end up listening to a song so many times from the moment I start writing it, until it’s done. The ones I’ve released recently, I listened to so many times that I’m fed up in a way. But the one’s that I released in the past, I come back to them every now and then. I think the songs I wrote in the earlier stages of my career are closer to my heart. One of them is called “Tipsy: 20 Blues.” That one is especially close to my heart.

The song starts with the line, “The tipsiness walks all over me.” At first listen, it just feels like a person feels tipsy because of the alcohol. But as the song progresses, it talks more about the “tipsiness” and how young people feel disoriented with their lives, because of the thoughts and dilemmas they come across for the first time. It’s about youth and finding my own path. We get beaten down by our own thoughts, and I tried to show that and it makes it quite meaningful for me.

You introduced yourself as “A vocalist with a feel and color” in “Kpop Star.” Would you say it differently if you could go back?


It is a little embarrassing, but I don’t regret it. I was 18 back then, and I wanted to show people the untamed energy of youth. I tend to think that there are certain things that people can do only when they’re a certain age, and I think people should do them — do the things you can at that age. I didn’t really think I had “feel and color,” but I just blurted out whatever came to my mind as a way to make it stick to people’s memories.

I do think I am a “singer with a feel and color” now. I was a vocalist aspiring to be a singer back then, but at least I have debuted now. The only fans I had back then were my family and friends from school — who were all very supportive. I might not be a huge star now, but I have people who like my music. I feel it every moment.

Why do you call yourself a small star?


My first concert was in 2018, which is quite late considering I debuted in 2014. It was really memorable, and I never had to look after myself so thoroughly for two days. I even had to quit drinking for a month before the concert and I think that was the hardest time of my life (laughs).

But I’m not the type to find myself in a slump. I think slumps are only allowed for the top stars. Personally, I think the tough times that we come across before we’ve actually accomplished anything isn’t a slump. Is that weird? Success is an idea that’s open to interpretation. It could be the Billboard charts for someone, but for me, it’s a singer who can put on concerts frequently — since I haven’t been able to do that, especially this year. 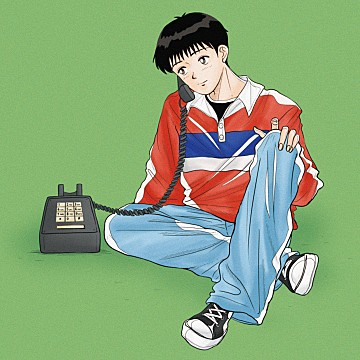 The cover of "Mild" released in July [MOONHWAIN]

How you do write your songs?


I start with the big idea. I think what’s being conveyed within the song can be someone’s emotions, but I think it’s all about the skills of expressing it. Just like everyone goes through different breakups and gets different ideas when they think about a breakup, I try to find the best expressions to fit the idea. I jot down the things that come to my mind, but I don’t end up using any of them. It feels so cheesy. The momentary blurts of emotions are important, but not very useful.


Who do you think likes your music?


I like to think that a variety of people will like my music. I know that a lot of my songs are calm, but I wish that people from different age groups and genders will all listen to them. But I do think female listeners would prefer my music.

I used to like it in the past when people noticed the things I intended in my music, but there were people who always came up with different ideas. I’ve come to like that feedback more. So nowadays, I try not to tell people what the song is about. I just tell them how I felt when I was writing it, because I know that other people can interpret it differently.

There was a song called “Always be with you” (2014) on the debut EP. It was a peaceful love song, but some people told me that it sounded really sad in a way. I never intended it to be so, but if you think about it, sometimes loving someone too much can bring you to tears. The idea that people could take it differently like that was so fascinating.

How did you feel when you learned that celebrities were listening to your songs?


Honestly, the first thought was, “More people are going to listen to the songs now.” The realistic thoughts came to my mind first. It felt nice that more diverse people were going to listen to my music. Then the second thought was that it felt so fulfilling to know that people who work in the same industry as me — although in different fields — liked my songs. It felt good in both ways.

You promised your fans an EP would come within the end of the year. Can you give us a hint about what it will be like?


I’ve been working on it, but I don’t have a lot of songs that I like at the moment. I plan on releasing it, definitely. I think a lot of people think that my songs are casual and natural in a way. But with this album, I’m planning on going for a “fancier” style. It could be with the diversity of the musical genre, the singing style or the lyrics — whatever it turns out to be, I’m going for something fancier.

What kind of an artist do you want to be remembered as?


I’ve thought about this for a while. I thought about what kind of an artist I wanted to become and how I want to be remembered. When I was younger, I was greedy and I wanted to be a good artist, an artist with good music. Now, I just want to be remembered for a long time in whatever sense, as long as it’s good. I think that’s the most meaningful and biggest success I could have. And as a person, I just wish that I’m not hated (laughs).