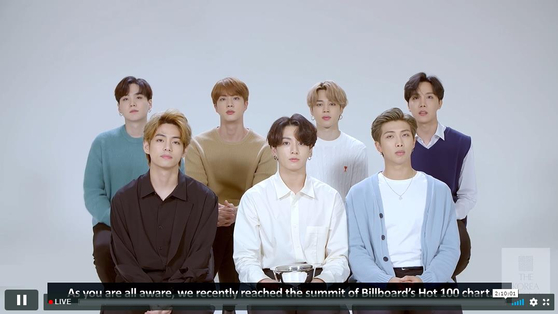 
BTS is facing backlash from its Chinese fans after a remark made by the group’s leader RM while receiving the 2020 Van Fleet Award during an online ceremony last week.

The award, established in 1995 by the Korea Society, annually honors an individual or a group that has contributed to enhancing the Korea-U.S. relationship. Former Korean President Kim Dae-jung was also honored. The award is named after General James A. Van Fleet, commander of the U.S. Eight Army during the Korean War (1950-1953).

“We will always remember the history of pain that our two nations shared together, and the sacrifices of countless men and women,” said RM during the ceremony on Oct. 7.

This year marks the 70th anniversary of the beginning of the Korean War which started on June 25, 1950 after a sudden attack by forces from now North Korea, and continued on until 1953. Chinese forces joined troops invading the South on Oct. 25, 1950.

Other fans have responded to the angry posts, citing that BTS didn’t even mention China in their remarks, and South Korea and the United States were allies in the war against North Korea and China 70 years ago.