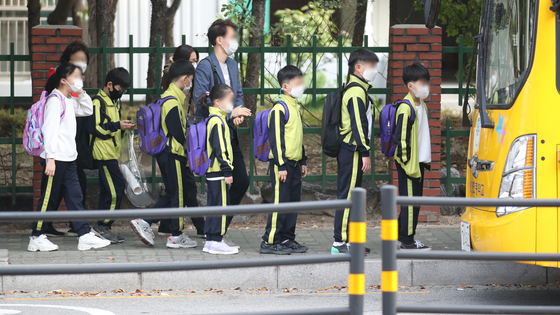 Students line up for a school bus in Nowon District, northern Seoul, Monday. Social distancing measures have been eased from Level 2 to Level 1, and Seoul education authorities said students will soon be allowed to go to school more often than before. [NEWS1]

High-risk businesses in the greater Seoul area including clubs, noraebang (singing rooms) and large hagwon (cram schools) reopened Monday for the first time in two months as social distancing measures were relaxed from Level 2 to Level 1.

The hottest clubs in the capital were deluged with young revelers as the clock struck midnight on Sunday, and Instagram was flooded with photos of partygoers drinking and mingling on the dance floors — some without face masks on.

In Jongno District, central Seoul, a part-time worker at a noraebang said Monday noon that he received 12 teams of customers during lunch time that day, more than the average of eight that used to visit before the business was closed on Aug. 16. That was soon after a large cluster emerged from a church in Seoul, which led to over 700 coronavirus cases.

A 23-year-old woman, who asked to be identified only by her surname Lee, said she came to the noraebang “to scream.”

“I was studying at a nearby study cafe to prepare for employment,” said Lee. “I’ve been really stressed out lately, so I’m planning to spend some time screaming for old times’ sake.”

A spokesperson for a branch of a YBM English hagwon in Jongno District, which also reopened for the first time in two months Monday, said some 80 to 90 students visited the center that morning to sign up for a class.

“I signed up for [an online] class last September, but this is the first time I physically came to the hagwon,” said Kim Hee-su, 24, who said she was studying for the Test of English for International Communication (Toeic).

The easing of Level 2 restrictions on the three-tier social distancing system was announced Sunday by Korea’s central government, with health authorities citing falling new cases of the coronavirus, the economic impact of the social distancing measures and how “fatigued” society was getting with the rules.

The Seoul Metropolitan Government said Monday that the capital would follow most Level 1 guidelines from the central government, though a few rules from Level 2 would remain in place. 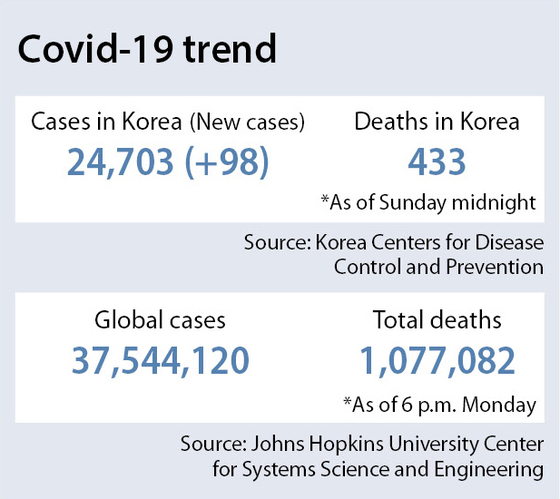 As before, protests will be strictly banned in downtown Seoul, including in Gwanghwamun and Seoul Plaza. However, the ban on any rallies involving 10 people or more will be eased to banning any rallies involving 100 people or more in areas outside downtown Seoul, acting Seoul Mayor Seo Jeong-hyup said in a press briefing. All protesters will have to  abide by key rules, such as wearing face masks at all times, having their temperatures checked before joining a rally and submitting their names and phone numbers in case they have to be reached for contact tracing.

The three most popular parks along the Han River — Yeouido, Ttukseom and Banpo — will reopen, but drinking and eating is still not allowed, and delivery services will stay banned.

With clubs and bars involving dancing or table-hopping, which are considered high-risk businesses, the Seoul city government said it has decided to impose a so-called break time system on them, which requires the businesses to “take a break” for 10 minutes every hour or 30 minutes every three hours to ventilate and take other preventive precautions.

During this break time, customers will be ordered to remain seated, the city said.

As for schools, Seoul’s education authority said Monday that starting from Oct. 19, all kindergartens, elementary, middle and high schools in Seoul will run at two-thirds of their capacity. At elementary schools, first graders will go to school every day, while students in other grades will take turns.

Military conscripts will be allowed to leave bases for vacations, although soldiers whose homes are in areas where a cluster recently emerged will be recommended to postpone their vacations.

Out of 98 new infections that were reported Sunday, the Korea Disease Control and Prevention Agency (KDCA) said Monday morning that 69 were domestic cases, while the rest were imported.

Among the domestic infections, 29 were in Seoul, 17 in Gyeonggi, 13 in Daejeon, three each in Busan and Incheon and one each in Gwangju, Gangwon, North Jeolla and South Gyeongsang.

Of the imported cases, 13 were from Nepal, four from India, three from Uzbekistan, two each from the United States and the Philippines and one each from Pakistan, Kazakhstan, Indonesia, Turkey and Algeria.

One person died Sunday, bringing total deaths to 433, while 36 patients recovered, raising total recoveries to 22,728. As of Sunday at midnight, Korea had counted 24,703 coronavirus patients in all.