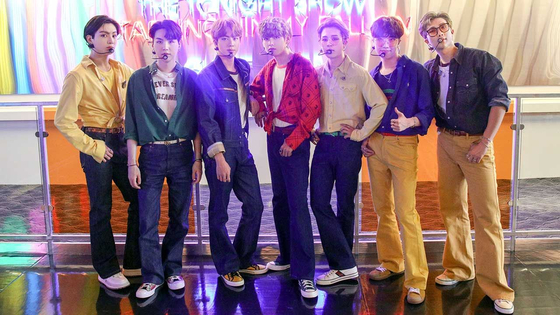 
BTS has marked its second No. 1 on the Billboard Hot 100 chart with "Savage Love (Laxed-Siren Beat),” a remix it collaborated on with Jawsh 685 and Jason Derulo.

"Dynamite" remained in the No. 2 position, following the remix of "Savage Love” after the chart was updated on Tuesday.

While BTS had its first No. 1 on the chart with “Dynamite,” an English-language single, the "Savage Love" remix is the first song to reach the number one spot that has Korean lyrics.

In the remixed version released on Oct. 2, BTS added the chorus and rap that includes Korean lyrics.

"Savage Love" was streamed 16 million times and downloaded 76,000 times, up 814 percent compared to the previous week, during Oct. 2 to 8 in the United States. It was also exposed to 70.6 million radio listeners on radio broadcasts during Oct. 5 to 11.

According to Billboard, BTS is the first group to double up in the top two simultaneously since The Black Eyed Peas with "Boom Boom Pow" and "I Gotta Feeling" in June and July 2009.

Its English-language single "Dynamite" is continuing its winning streak for seven weeks, ranking No. 1 three times and No. 2 four times since it made a debut at No. 1 in the Hot 100 on Aug. 31.