Choi Ji-man homers in Game 5 of the ALCS

Choi Ji-man homers in Game 5 of the ALCS 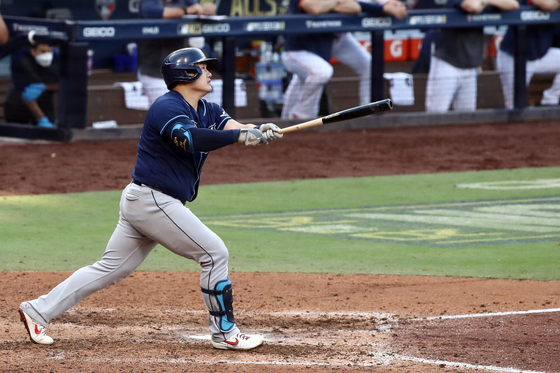 Choi Ji-man of the Tampa Bay Rays hits a solo home run against the Houston Astros during the eighth inning in Game 5 of the American League Championship Series at Petco Park in San Diego on Thursday. [AFP/YONHAP]

Choi Ji-man of the Tampa Bay Rays finally broke his silence on Thursday, but the Rays were unable to pick up a win against the Houston Astros to take the American League Championship Series (ALCS) title at Petco Park in San Diego.

The Astros were the first on the scoreboard in Game 5 of the ALCS, picking up a run in the first to take an early lead. The Rays tied the score at the top of the third, but the Astros quickly picked up two more at the bottom of the third to take the score to 3-1.

The Rays pulled one back at the top of the fifth, but going into the later innings the Astros were still ahead 3-2.

It wasn’t until the top of the eighth that the Rays fought back. Choi stepped up to the plate to open the inning, hitting a clutch one-run home run to right center field to tie the match 3-3.

The eighth inning ended without anymore runs and both teams headed into the ninth desperate for a game-winning run. The Rays started strong, with Mike Zunino hitting a single to get on base. However, that may have been the end of their luck as Brandon Lowe was struck out and both Randy Arozarena and Austin Meadows were caught out to end the top of the ninth.

Heading into the bottom with Nick Anderson still on the mound for the Rays, things were going well until Carlos Correa headed to the plate. Having previously hit a home run against the Rays in Game 2 of the ALCS, Correa did it again.

Correa’s solo homer over the center field ended the game to lead the Astros to their second win in the Series. With the run, the Astros picked up a 4-3 victory in Game 5 and extended the series to Game 6. The Rays still have a 3-2 lead and have to win just one more game while the Astros need to win two straight games to head to the World Series.

Despite the loss, Choi's home run proved his presence on the Rays roster and in the ALCS. Choi’s bat has stayed mostly quiet throughout the series. After sitting out Game 1, Choi appeared in Game 2 but failed to pick up a hit in four at bats, although the Korean slugger was able to add a run after getting on base due to a fielding error.

Choi sat out during Game 3 but once again returned in Game 4, picking up one hit in the loss. It wasn’t until Game 5, when Choi hit that clutch homer to tie the game, that Choi started to make his presence in the batting box known.

As there's no break between ALCS series, Game 6 will be held on Friday night at Petco Park in San Diego, local time, or Saturday morning, starting at 7:07 a.m. in Korea.