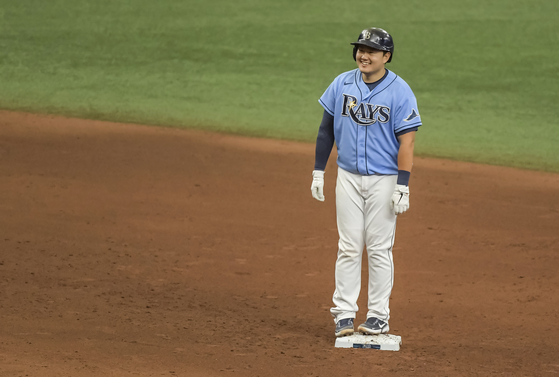 
Choi Ji-man returned to the Tampa Bay Rays lineup for the first time this season on Sunday, rejoining the major league squad after sitting out the early games following knee surgery during spring training.

Choi went three-for-four in his return game, hitting the very first pitch he saw in the first inning for a single. With three hits, one run and one RBI in the game, the Korean first baseman begins his season with .750 batting average.

The popular slugger received a warm greeting from the home fans, chanting "Ji-man Choi" in every one of his at-bats.

“I really want to thank the fans,” Choi was reported as saying in the Tampa Bay Times. “Every time I stepped on the field, they were cheering for me. That really helped a lot and I wanted to do my best for them.

“I felt like I saw the ball really well today. When I woke up, everything felt good. It feels good just to be in the lineup with my teammates and contribute to this team in any way possible.”

Now that his injury woes appear to be over, Choi is expected to retake his regular starting position in the Rays' lineup.