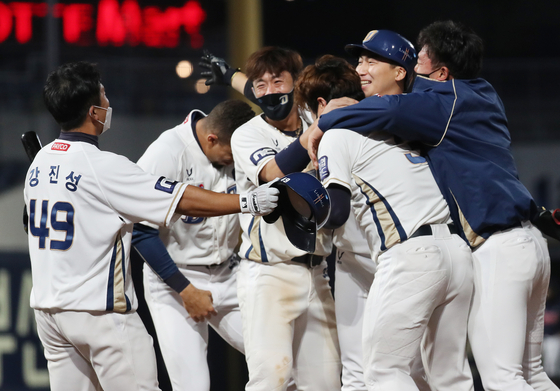 The NC Dinos celebrate after picking up a thrilling 6-5 victory against the Lotte Giants at Changwon NC Park in Changwon, South Gyeongsang on Friday. [YONHAP]

Despite their 9-2 victory against the seventh-ranked Lotte Giants on Sunday, the Dinos are only three games away from finalizing a regular season victory. As of Monday, the Dinos have played in total 136 games this season, where they picked up 80 wins, four draws and 52 losses.

With eight games remaining and a five-game lead ahead of the second-ranked LG Twins, their magic number has come down to three.

A win in the regular season means that the Dinos will earn a spot in the Korean Series, rather than having to play in the playoffs.

Regardless of the number of losses, the Dinos only need to pick up three more wins for their first-ever regular season title. The Dinos are one of the younger clubs in the KBO after joining in 2013. They advanced to the Korean Series once back in 2016 but had to settle for a runner-up finish after losing to the Doosan Bears.

While the Dinos are in a good position, the competition for the second-place spot is more competitive. As of Monday, the Twins are ranked second in the regular season standing, only half a game ahead of the third-ranked KT Wiz and the fourth-ranked Kiwoom Heroes.

Although the reigning champions the Doosan Bears are in fifth place, the last postseason spot, they still have a shot at making an upset to finish second as they are only 1.5 games behind the Twins.

As the KBO clubs will start playing their make-up games on Tuesday, the Heroes have the least chance of finishing second in the league, as they only have two games left to complete their regular season. Both of the games will be against the Bears.

As the Wiz have the most games remaining in the season, at eight, they have the best shot at finishing second. Both the Dinos and Wiz’s performance this season came as quite the surprise considering they are two of the youngest clubs in the KBO.

While the Dinos are no strangers to the postseason, except for 2013 and 2018, the Wiz being in contention comes as a bit of an upset. Since they joined the KBO in 2015, the Wiz finished dead last in their first three seasons and in 2019, they barely avoided the last spot by finishing ninth. Having just missed the postseason spot in 2019 by finishing sixth, their advancement to the postseason is impressive.

Although the sixth and seventh-ranked Kia Tigers and Giants have the most number of make-up games to be played, at 10, they almost have no shot at making it to the postseason, as the Tigers are 5.5 games behind the Bears and the Giants are a full six games behind the Giants.

Four KBO games will be played Tuesday, starting at 6:30 p.m.