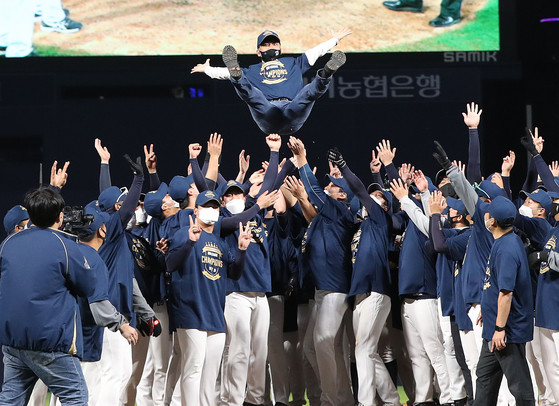 The NC Dinos throw owner Kim Taek-jin in the air after winning the KBO pennant at Changwon NC Park in Changwon, South Gyeongsang on Saturday. [YONHAP]


For the first time in the club's history, the NC Dinos have won the KBO's regular season title.

Despite an offensive onslaught throughout the season, the winning blow was actually a strikeout at the bottom of the 12th inning to secure a 3-3 tie against the LG Twins at Changwon NC Park in Changwon, South Gyeongsang on Saturday night. With the tie, the Dinos now have enough of a lead to guarantee the 2020 pennant.

The Twins, currently in second place as of 1 p.m. on Sunday, didn't go down without a fight.

The Seoul team took a 1-0 lead in the first, and it wasn't until the bottom of the fourth that the Dinos were able to level the playing field. The Dinos added two more runs at the bottom of the fifth inning to take a 3-1 lead and start closing in on a season-winning victory.

The Twins left it until the last minute, but came back in the eighth, picking up two runs to tie the score at 3-3.

With neither team able to cross the plate over the next four innings, the game ended in the 12th — the KBO limit for regular season games — as a 3-3 tie. 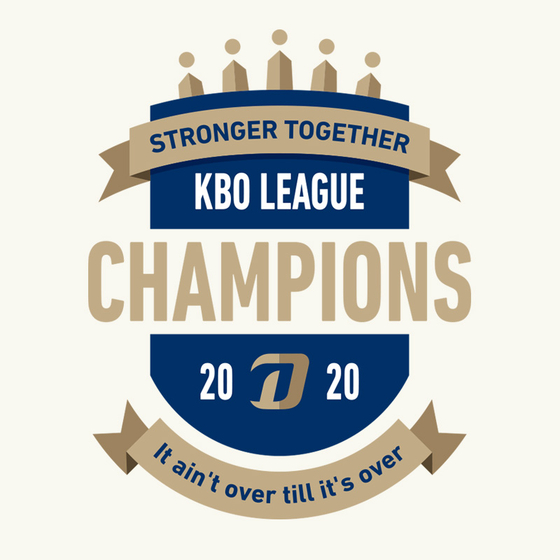 The Dinos' victory comes just two weeks after the KBO started to allow fans back into ballparks, meaning the team was able to celebrate the historic achievement with the stadium sold out to its 25 percent capacity limit.

The Dinos are one of the younger teams in the KBO, having joined in 2013. Throughout the club's eight-year history, they've finished runner-up in the regular season once, back in 2016. That year, the Dinos advanced to the Korean Series after defeating the Twins in the playoffs, but were swept by the Doosan Bears in four games.


Following the 2016 season, the Dinos went through a rough time in 2018. During that year, the Changwon club finished dead last in the regular season. This was the only time that the club has ever finished last.

After signing catcher Yang Eui-ji on a four-year 12.5-billion-won ($11.1 million) deal that year, the club slowly built their way up to the top. With Yang, the team has developed a strong squad of young pitchers like Koo Chang-mo this season.

As the regular season champion, the Dinos have earned a bye all the way to the Korean Series.

This gives the Dinos a lot more time than the other teams in the postseason to rest, as the Korean Series is currently scheduled to start on Nov. 17.

Unfortunately, as the postseason has been pushed back into November, the Dinos won't get to play any of their Korean Series games at home in Changwon as the KBO has already announced that all Korean Series games will be played at Gocheok Sky Dome in western Seoul, the only covered stadium in the league.

The regular season is due to end on Oct. 30 and the Wildcard series will start on Nov. 1.