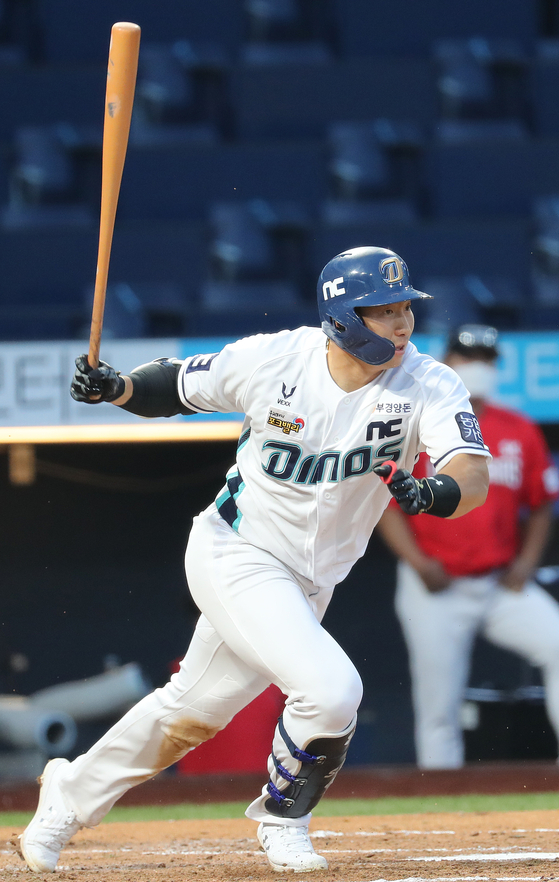 After failing to sign a contract with a major league club, Na Sung-bum will return to his KBO club, the NC Dinos, for the 2021 season. [YONHAP]


Na Sung-bum will be returning to the NC Dinos in the 2021 season.

Na, who was hoping to head to the major league after the 2020 season through the posting system, failed to find a big league club to sign within the 30-day signing period. Due to this, he will have no choice but to return to his KBO club, the Dinos.

As Na was out in the market through the posting system, he had until 5 p.m., Saturday Eastern time, or 7 a.m. Sunday Korea time, to sign his contract.

This comes as a huge blow to Na, as he originally planned to head to the majors after the 2019 season. However, as he had to skip almost all of the 2019 season due to a knee injury, incurred while stealing a base, he had to postpone his plan for another year.

Having undergone knee surgery, Na made a quick recovery and a successful return in the 2020 season. Throughout 130 games, he finished with a .324 batting average with 34 home runs. His performance was good enough to help the Dinos win its first-ever regular season and the Korean Series title.

With a successful season and his super agent Scott Boras, it seemed as if Na was going to make his dream come true. Boras is famous for landing big contracts for notable Korean baseball players, like Park Chan-ho and Ryu Hyun-jin of the Toronto Blue Jays.

However, Na’s competitiveness in the major league’s free agent market was lower than expected.

Up until the 2018 season, his average base-stealing per game was at 14.8. But this season, he only stole three bases. He still had his ability to steal bases, but the number of his attempts to steal bases decreased significantly.

Na also wasn’t able to overcome his poor strikeout percentage, at 25.3 percent. At age 31, his age was also a disadvantage.

But the biggest thing was the timing.

Due to the coronavirus pandemic, the major leagues had to shorten their season to 60 games and played through the games without any fans. Due to this, clubs were unable to avoid financial struggles. Some of the clubs had reduced staff. For such reasons, the free agent market this season is a lot slower than expected.

“The free agent market is an unforgiving one this off-season,” MLBTradeRumors.com wrote. “And it might be that Na was too uncertain an asset for interested teams. The 30-day posting period also likely worked against him given the glacial pace of free agency. Ultimately, agent Scott Boras was unable to find a deal.”

Since Na will become a free agent after the 2021 season, he could try again once the season ends. This time, he won’t have to go through the posting system as Na will be a free agent.

“I’d be lying if I said I'm not disappointed, but I don’t have big regrets,” Na said. “I’m sure there’ll be other opportunities. I’ll try my best to help [the Dinos] win in the 2021 season.”

Although it’s disappointing news for Na and the Dinos, his return to the KBO club is good news. Na had been a crucial member on the Dinos' roster.

“Na Sung-bum is Na Sung-bum,” said Dinos manager Lee Dong-wook. “There’s no other player that can replace him.”

This season in the KBO, three players — Kim Ha-seong, Na and Yang Hyeon-jong — announced their intention to head to the majors. Of the three, so far, only Kim managed to land a successful contract, as he signed a four-year deal with the San Diego Padres.