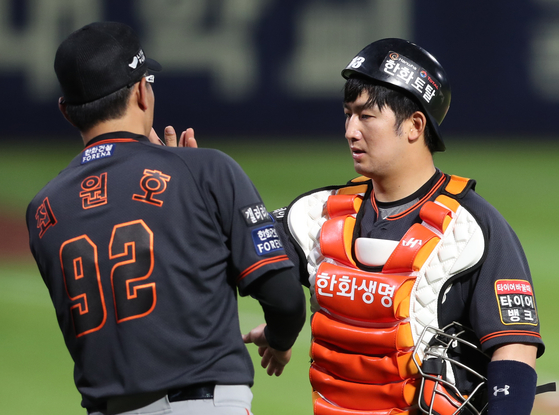 
The KBO's 2020 regular season may not have ended yet, but the Hanwha Eagles will already be trying to forget a historically bad year.

Back in June, the Eagles made history, but not in a good way.

The Daejeon club set the KBO record for the most straight losses, at 18, breaking the Sammi Superstars’ losing streak from 1985. During this process, the Eagles’ former manager Han Yong-duk left the team and Choi Won-ho was eventually appointed as interim manager.

After hitting rock bottom in the early summer, the Eagles had nowhere else but to go up.

Although the Eagles are still stuck at the bottom of the table, they still have a chance of catching up with the ninth-ranked SK Wyverns. The 2020 season may well be a write-off, but their recent improved performance has given the Eagles’ young players something to smile about, and could pay dividends next season.

Catcher Choi Jae-hoon may well be behind the Eagles’ success in October.

From Oct. 6 to 11, he had a batting average of .500, good enough to top the league’s weekly batting average. Not only that, as catcher he successfully led the Eagles' pitchers to feel more comfortable on the mound. During this time, the Eagles picked up five wins and two losses.

Although the Eagles lost all their games the following week, they are hoping to finish strong.

Below are edited excerpts from an interview with Choi.


Q. What is the success behind your strong batting performance?

A. As I wasn’t batting well at the beginning of the season, I think I was rushing a little too much. Since I couldn’t make contact, I was already losing in the count. As I swung for the ball, I was losing that batting feeling. Looking back at the time when I was batting well last year, I was seeing good results only when I was watching the ball as much as possible and trying to push through the ball. So I tried thinking about that and slowly made changes.


Q. It’ll be hard to fulfill the regulated number of innings but it does seem possible for you to reach a .300 batting average. How do you feel?

A. For the second straight season, I set my goal at fulfilling the regulated number of innings and I'm disappointed that I couldn’t. Even if I finish [the season] with a batting average above .300, it won’t stay as my record since I didn’t fulfill the regulated innings.

I think this could be why I can just let go of my own ego and only focus on helping the team win. Rather than thinking about my record, I’m trying to make as many hits as possible and more than anything, get on base as many times as possible to help our team pick up one more win.


Q. Despite the injury and the pressure from feeling physically tired, you’ve managed to secure the Eagles’ home plate throughout the season. How did you do that?

A. This season, we had a lot of players getting injured on the team and players who struggled. I don’t think there were that many games that we got to play with our best lineup. Due to this, I told myself that I can’t get injured too, so I bear the pain and keep playing. When I couldn’t play because of my injury, I felt really sorry for the team. The catcher is a very important position in baseball. I told myself to get through it until the end because once I get sick, I felt like our team was going to sink.


Q. This year, the Eagles have a lot of young pitchers appearing on the mound. What did you think of them?

A. I’m really thankful to our young players for playing well. Rather than watching me, I think they’ve learned well by watching other veteran pitchers. When we have young pitchers on the mound, I tend to be more careful because they are the players who will be responsible for the Eagles’ future. That’s why I give them more advice and compliment them.

For pitchers to grow, they shouldn’t avoid their count against batters. Once they start avoiding, that becomes a habit. They need to give away hits to know their pitches. To give young players more confidence, I’m being extra careful in the mix of pitches.

Q. This is already your fourth season with the Eagles. How do you feel?

A. Back when I was with Doosan, I was a backup catcher on a higher-ranked team so I wasn’t able to think about leadership. But as I started to take the role of being the starting catcher, I think I got to develop as well.

Now I’m at that time in my career where I can’t just think about myself. I’m in a position where I have to develop in baseball and outside of baseball. I want to become a veteran player where I can show and get better with the younger players.


Q. The atmosphere in the Eagles’ dugout seems to be getting better and better. Do you also feel that?

A. In the beginning, it was really hard. I felt like all our losses were because of me.

After we ended our losing streak and started winning more games, the atmosphere changed. We tried not to lose in games where we were leading and even when we’re losing, we try to do something to change it.

I think the younger players are more desperate for not wanting to be sent down to the Futures League. Even the veterans are working hard with the mindset that they might lose their spot once they let themselves lose. I hope this continues next year as well.

Q. What would be your goal for the remainder of the season and next year?

A. This season, I’m sure the fans were very disappointed, and we feel very sorry. We want to try to win at least one more game. I think it’s our duty to show them that even if we lose, we won't give up until the end.

As for next year, our goal is to be the team that continues to develop, rather than the team that sinks. More than anything, I hope the season turns out to be the one where all our players and the fans can smile at the end.

I want to show the side of me where I get better with the team. I want to consistently improve. For professional players, I think consistency is the best thing.