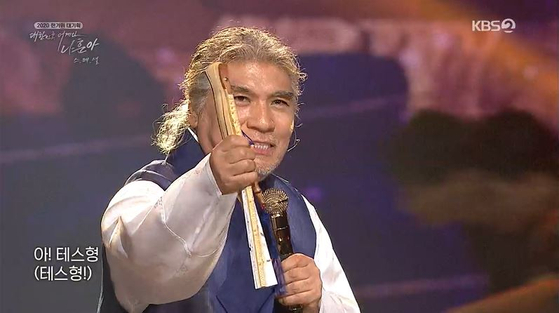 As of Friday afternoon, the video was viewed more than 7.45 million times. The video is composed of natural landscapes and footage of Na. It also has the lyrics of the song.

The track is part of Na’s full-length album “A Tale of Nine Stories” released in August. “Tes” refers to the Greek philosopher Socrates, and the singer asks questions to the philosopher such as, “Why is the world like this?” and “Why is [life] so hard?”

The video’s popularity is tied to the singer’s first online concert, which was aired on KBS on Sept. 30 as a Chuseok holiday special and scored a viewership rating of 29 percent — exceptionally high for a TV concert. The singer seems to have won over a new generation of fans.

Trot, an early form of Korean pop music, is a genre associated with singers over 40 and is one of Korea’s original types of popular music.

Meanwhile, Danal Entertainment said it is responding to videos of Na’s concert that are being illegally distributed in China.

“We are strictly censoring the illegal distribution on Chinese websites as well as copyright infringement overseas of our content,” said Lim Yu-yeop, head of the Music Department of Danal Entertainment. “This includes YouTube and other social media channels.”