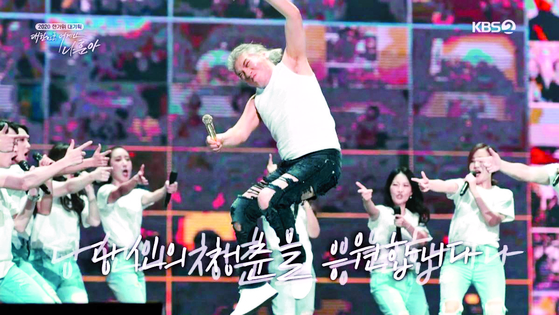 Singer Na Hoon-a performs during a special concert, which was aired on KBS 2TV on Wednesday, which became the talk of the town during the Chuseok holidays. [TV CAPTURE]


BTS and Blackpink weren't the only Korean pop stars who were the talk of the town during the Chuseok holidays.

The name Na Hoon-a, who is a 73-year-old veteran singer-songwriter and dubbed the "Emperor of the Trot," appeared on numerous social media accounts and Internet communities, even in those of the younger generation, after his first TV concert in 14 years was aired on KBS 2TV on Wednesday night.

Over the last few years, tickets for Na's offline concerts have been called "the most sought-after gift for old parents" because the singer, who has a 54-year career and scores of hit songs including "Japcho (Wild weeds)" (1982) has shown his perfectionism on stage in a limited number of concerts. The 30,000 tickets for his May 2019 concert sold out within eight minutes after they were released.

This time, "so as to comfort and cheer up many people depressed by the Covid-19 pandemic," Na agreed to hold a free TV concert, according to the state-run KBS TV. The veteran singer had originally planned to hold an outdoor concert with an audience. However, as the number of the daily Covid-19 cases surged, he agreed to hold his first-ever livestream concert with 1,000 online viewers from various parts of the world including Korean emigrants in Japan, Australia and Zimbabwe, which was recorded to be aired later.

Changing into various clothes ranging from hanbok to ripped jeans and a sleeveless T-shirt, Na sang about 30 songs including his famous hits such as "Musiro (At any time)" and "Hongsi (Persimmon)" and new songs including "Tes Hyeong (Brother Socrates)," whose lyrics are Na's questions to the ancient Greek philosopher.

The concert took place on Sep. 23 and then was aired on TV on Wednesday. It gained a viewership rating of 29 percent, which is exceptionally high for a concert, according to market tracker Nielsen Korea. On Thursday, Na-related terms accounted for half of the 10 most-searched words on Korea's biggest Internet portal Naver. Even on the list of the most-searched words by users in their 20s, Na's new song "Tes Hyeong" ranked second and his name ranked fourth. "Wow, it is my first time to see him, but this grandpa looks awesome!" wrote a user of a teenagers' community on the portal Nate Pann.

Well-known politicians including Gyeonggi Gov. Lee Jae-myung of the ruling Democratic Party (DP) and Jeju Gov. Won Hee-ryong of the opposition People Power Party (PPP) wrote on their social media accounts that they were really cheered up by Na's concert. Many netizens paid attention to not only Na's songs but also his comments during the concert, saying "We are now much tired [of the pandemic]. I have never seen a monarch or a president who really risked their lives in history. The [ordinary] people like you have protected this country... You are the best...We can overcome this pandemic."

Some netizens and opposition party politicians interpreted this as a roundabout compliant about the current administration's policies, while supporters of the ruling party opposed the interpretation. This controversy made the concert even more viral.

Due to the unexpected huge popularity of the concert, KBS 2TV hurried to make an unscheduled program "Na Hoon-a Special," which features behind-the-scenes footage from the concert, along with the re-airing of the concert, on Saturday night. Although it was aired at a relatively late hour, the special program gained an 18.7 percent viewership rating, according to Nielsen Korea.

During the program, Na talked about his first embarrassment when he had to choose to hold an online concert which he was completely unfamiliar with. "But I couldn't yield to Covid-19, the invisible, strange thing. I thought I would never step back."