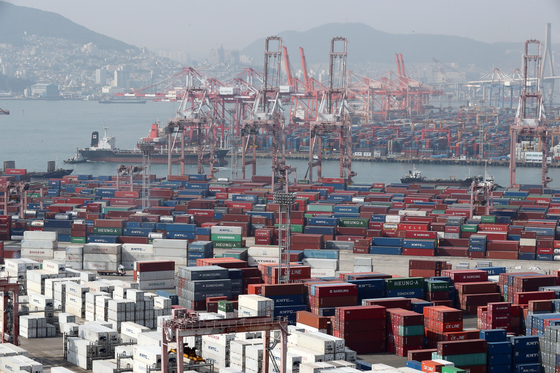 Cargo waiting for export piled up at a port in Busan on Oct. 27. The Bank of Korea announced that the economy grew 1.9 percent quarterly in the third quarter largely thanks to robust export. [YONHAP]


The Korean economy crawled out of a recession in the third quarter thanks to a boost from exports.

Whether positive growth can be maintained is a big question as the pandemic rages on in Korea's big export markets including the United States.

According to the Bank of Korea Tuesday, the Korean economy grew 1.9 percent in the third quarter when compared to the previous quarter, ending two consecutive quarters of negative growth on a quarterly basis.

The 1.9 percent quarterly growth in the third quarter was the sharpest growth in a decade.

The last time the economy grew more was in the first quarter of 2010, when quarter-to-quarter growth was 2 percent.

When compared to a year earlier, however, the economy fell 1.3 percent in the third quarter, the second consecutive quarter of negative growth on an annual basis. The drop eased from the second quarter’s 2.7 percent decline.

Exports had a good quarter, especially automotive shipments and IT products.

Exports grew 15.6 percent compared to the previous quarter, a sharp turnaround from the 16.1 percent decline in the second quarter.

The boost in exports helped the manufacturing sector.

In the third quarter, output from manufacturing grew 7.6 percent quarter-on-quarter, a turnaround from the second quarter's 8.9 percent decline.

In the third quarter, the public sector’s contribution to the economy, which cushioned the economic decline in the previous quarter, shrunk.

In the second quarter, government spending grew 1.1 percent compared to the previous quarter. In the third quarter, it grew by only 0.1 percent.

In the second quarter, the government gave 11.5 trillion won ($10.2 billion) emergency relief grants to every Korean household to stimulate spending.

Consumer spending in the third quarter dipped 0.1 percent compared to the previous quarter, a contrast to the 1.5 percent quarter-to-quarter increase in the second quarter. On an annual basis, consumer spending fell 4.5 percent.

“[The GDP growth report] has significant meaning in that the economy is entering a course of normalization and has given us ‘hope’ of overcoming the crisis,” Finance Minister Hong Nam-ki said on Facebook.

“When comparing to other major countries, we minimized the damage inflicted by the coronavirus by the third quarter of this year,” Hong said. “And based on this, we believe we are recovering to pre-crisis levels at the fastest pace [compared to other major economies].”

Hong said the economy could have seen growth in the mid-2 percent range or higher in the third quarter if it wasn’t for the resurgence of the coronavirus over the summer and that consumer spending, which recovered in the second quarter, would have continued.

“While we expect the easing of social distancing restrictions [lifted on Oct. 12] will contribute to the recovery of the domestic economy […] there are still uncertainties including the spread of Covid-19 in Europe, the U.S. presidential election and tensions between the United States and China,” Hong said.

“Under the strict quarantine efforts for the remainder of the year, the government will speed up the early normalization of our economy by enhancing all means of improvements including boosting the domestic economy and supporting exports,” he said.

Global institutions have been adjusting Korea’s economic growth outlook for the year citing the government's aggressive spending as a positive factor.

The IMF was the latest. Earlier this month, it projected the Korean economy will show negative economic growth of 1.9 percent for the year, an improvement on a projection in June of negative 2.1 percent growth.

The Organisation for Economic Cooperation and Development (OECD) in a forecast made in September said the Korean economy will contract 1 percent, an improvement over its June forecast of a 1.2 percent drop.