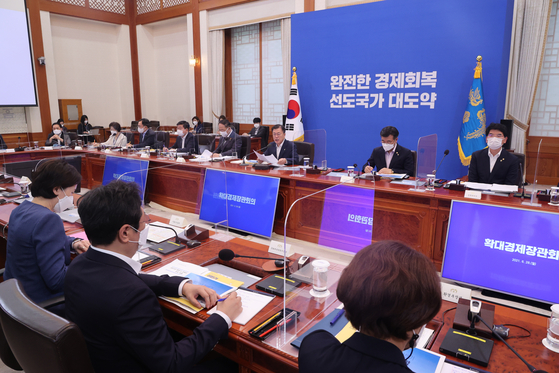 President Moon Jae-in heads a meeting on a second half economic plan on Monday at the Blue House. The government raised its economic growth target for this year from 3.2 percent to 4.2 percent. [YONHAP}

The government set its economic growth target at 4.2 percent for this year.

That's a major jump from its previous target of 3.2 percent and even higher than the 4 percent goal announced by President Moon Jae-in in May.

In achieving that goal, the government said it will be focusing on boosting the domestic market in the second half of the year.

This includes a new cash-back program and issuing vouchers to increase spending in areas such as in movies, sports and domestic travel of rail and buses.

These programs will be funded through a supplementary budget, details of which are to be announced later this week.

The extra budget will also be used to help develop Korea’s own Covid-19 vaccine, which the government is hoping to launch in early 2022.

The government’s economic growth target was announced during a meeting headed by President Moon Jae-in on Monday.

“The second half of this year is an important period in which the economy should recover swiftly along with a return to normalcy through herd immunity,” Moon said during the meeting .

“We were the first among major advanced countries to see GDP recover to pre-Covid-19 levels in the first quarter,” Moon said. “And the improvement in the economy continues with exports reaching a record in the second quarter and investment increasing significantly.

“With such robust exports, we could even expect annual [economic] growth that not only exceed our initial target of 3.2 percent but even 4 percent,” Moon said.

Moon said the government will focus on reviving the domestic market and especially services, which are still affected by Covid-19 social distancing measures.

“We need to execute bold measures that will encourage spending by backing up the spending ability of low and middle-income households,” Moon said.

Particular help is needed for the self-employed and small businesses, especially in culture, the arts and tourism.

A 4.2 percent growth level would be a sharp rebound from a 1 percent GDP decline in 2020 and the strongest growth under the Moon administration.

In the second half, the government wants consumer spending growth for the year to be at least 2.8 percent compared to 2020.

However, the program depends on progress in inoculations.

The government said it will start giving away coupons and vouchers for restaurants, sports, movies, exhibitions and concerts when the inoculation rate reaches 50 percent, possibly in August.

Coupons and vouchers will be given away for hotels and domestic travel when the inoculation rate reaches 70 percent.

Another program to be introduced in the second half to boost spending is a cash-back program for credit card spending by lower-income families.

The government is earmarking 1 trillion won ($884 million)  in the supplementary budget for the cash-back program.

If an eligible family spends more on credit cards than in the second quarter, they would get cash back equivalent to 10 percent of the additional spending.

Take as an example a person who spent 1 million won in one month in the second quarter. If that person spends 1.53 million won in August, he or she gets 50,000 won back.

However, spending at discount marts such as Emart, Lotte Mart, department stores, online shopping malls as well as at hostess bars and for auto purchases will be excluded.

The government also said it it is working on a so-called “travel bubble,” or freeing up travel with countries that are controlling Covid-19.

Meanwhile the government said it hoped to keep inflation from rising above 2 percent.

Although its inflation target has been raised from an earlier 1.1 percent, the government hopes to keep it to 1.8 percent this year.

The government is continuing its job policies in the second half, hoping for 250,000 more employed people by the end of this year compared to last year.