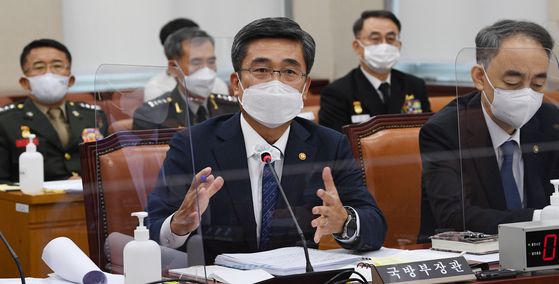 
No mention was made about keeping the U.S. Forces Korea (USFK) at its current size during a bilateral defense chiefs’ meeting earlier this month because the U.S. government is “flexibly adjusting” its troop deployments abroad, said Seoul’s Ministry of National Defense.

The statement, released publicly by an opposition lawmaker during a parliamentary audit hearing on Monday, was the first time Korea’s Defense Ministry acknowledged the likelihood that the 28,500-strong U.S. forces on its soil could be reduced.

Rep. Kang Dae-sik, a lawmaker with the conservative opposition People Power Party, had asked the ministry why USFK troop levels were not discussed at the Security Consultative Meeting (SCM) held between the allies’ defense ministers on Oct. 15.

“The U.S. government is currently looking into plans to adjust the size of U.S. troop deployments abroad in line with changes to its global security strategy,” read the Defense Ministry’s written response, according to Kang.

“[The United States] is seeking to flexibly adjust its troop deployments depending on security circumstances rather than to continue fixed deployments in particular countries,” the statement said.

Asked by Kang if he could confirm the ministry’s response, Korean Defense Minister Suh Wook said he believed there was a directive in the Pentagon calling on the U.S. government to take a “flexible stance” toward overseas security commitments.

But Suh also appeared to deny the likelihood of a USFK troop reduction, saying U.S. Secretary of Defense Mark Esper had “promised unwavering security commitment” to Korea at the SCM.

The possibility of adjusting the troop levels was not discussed at the meeting because the force’s size is “completely controlled by the U.S. Congress under the National Defense Authorization Act,” Suh added.

Though the possibility of troop adjustments may not be imminent, with the United States a week away from a presidential election, the idea contained in the Korean Defense Ministry’s response appears to be in line with the concept of “dynamic force deployment” espoused by key security planners in the Trump administration.

According to a summary of the Pentagon’s 2018 national defense strategy, Washington's dynamic force employment “will more flexibly use ready forces to shape proactively the strategic environment.”

In July, as he stressed the commitment to implementing this national defense strategy, Esper said he preferred rotational deployments of U.S. troops into global theaters, as opposed to permanent stationing, because it would give the United States “greater strategic flexibility” in responding to global challenges.

Such hints of major changes to the U.S. troop presence in South Korea have raised deep anxiety in Seoul that U.S. President Donald Trump could shake up the allies’ long-standing security arrangement given his obvious discontent with Seoul’s contribution to the upkeep of the USFK.

In negotiations that have dragged on for almost a year now, Washington is reportedly requesting $1.3 billion per year from South Korea for USFK, down from its original demands of $5 billion, while Seoul said its best offer is 13 percent more than what it paid last year, or around 1.17 trillion won ($965.6 million).

The future of the alliance is a top concern for Seoul as it awaits the outcome of next week's presidential election, in which Trump trails his Democratic rival Joe Biden by a significant margin, according to polling aggregates.

Brian McKeon, one of Biden’s top foreign policy advisers, said in an interview with Yonhap News Agency this month that a significant reduction in USFK troop numbers would be unlikely under a Biden administration, but did not rule out the possibility altogether, citing a pending assessment of the U.S. global force posture.

But Biden would work to improve ties with key U.S. allies, including Korea, departing Trump's treatment of allies as if they were part of a “protection racket,” McKeon said.