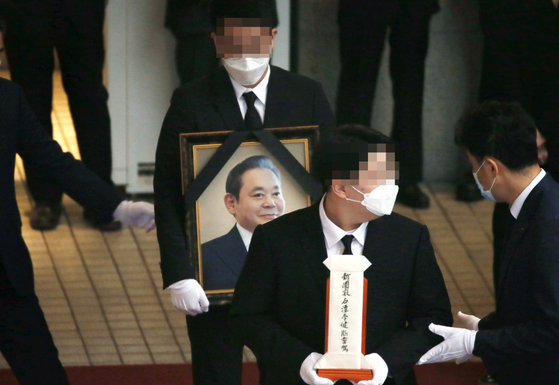 A picture of Samsung Electronics Chairman Lee Kun-hee is shown at the funeral service in Samsung Medical Center in southern Seoul on Wednesday. [YONHAP]


Samsung Electronics Chairman Lee Kun-hee was laid to rest on Wednesday at a family burial site in Suwon, Gyeonggi.

Lee died on Sunday at 78 years old, six years after being hospitalized following a heart attack in 2014. 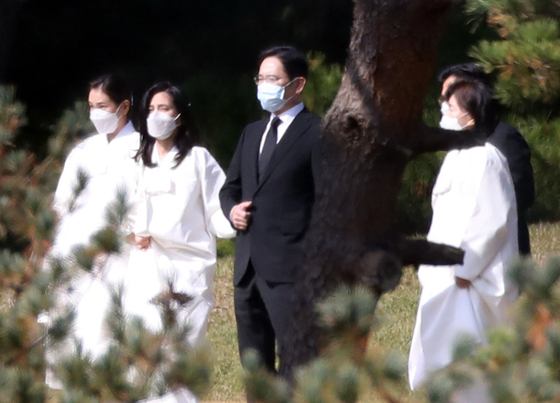 Family members move to a burial site for the late chairman in Suwon, Gyeonggi, on Wednesday. [YONHAP]

Hyundai Motor Group Chairman Euisun Chung was also present at the funeral before the coffin was moved to the burial site.

En route to the burial site, the hearse carrying the coffin first traveled north through Seoul, passing by Lee's house in Hannam-dong, central Seoul, the nearly Leeum Museum of Art and Seungjiwon, a traditional building originally constructed as the home of the late Lee Byung-chull, founder of Samsung Group and father of Lee Kun-hee, and later used as the younger Lee's office. 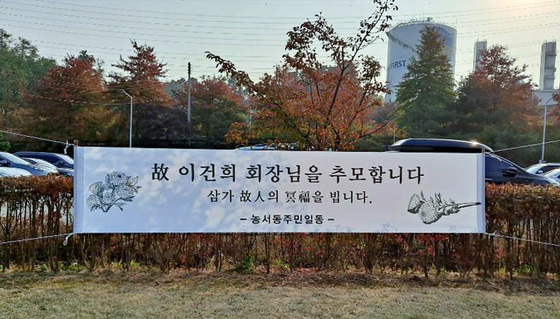 A banner remembering Lee is displayed at a chip complex in Hwaseong, Gyeonggi, on Wednesday. [YONHAP]


After heading south out of Seoul, the hearse also drove past a chip complex in Hwaseong, Gyeonggi, symbolizing Lee's achievement of transforming Samsung into a top memory chipmaker. The hearse stopped at the Line-16 production line at the plant, as the late businessman was known to have a special attachment to the memory chip facility.

Some of Lee's last public appearances before his hospitalization centered around the production line, including a groundbreaking ceremony in 2010 and an event celebrating the mass production of semiconductor wafers there in 2011.

The family members who came out to express their gratitude during the brief stop were met by thousands of Samsung employees, workers from partnered companies and even residents from the region.

The mourners held chrysanthemums in remembrance of the deceased chairman.

Also joining the ceremony were executives past and present from Samsung Electronics including CEO Kim Ki-nam and Kwon Oh-hyun, a senior advisor who formerly led Samsung’s semiconductor business.

In the meantime, a retrial in connection with a controversial 2015 merger began on Monday to look into Lee Jae-yong’s role in the deal that is believed to have cemented his control over Samsung.

He was not present for the trial as he was attending his father's mourning altar.