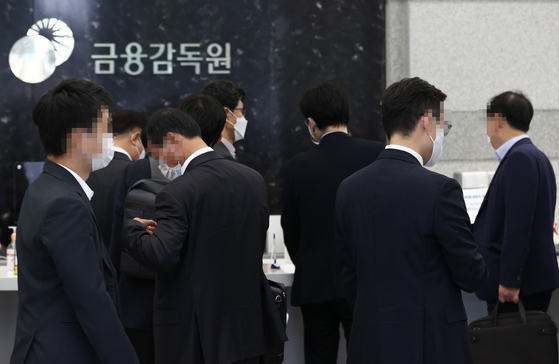 Executives from Shinhan Investment wait in line to participate in the sanctions review against sellers of Lime funds, Thursday, at the FSS office lobby in Yeouido, western Seoul. [YONHAP]


After eight hours of negotiations running into the evening Thursday, the Financial Supervisory Service (FSS) decided to kick the can down the road on deciding punishments for brokerages that sold junk products to unsuspecting investors.

It will meet again early next month to continue discussions.

Three financial institutions — KB Securities, Daishin Securities and Shinhan Investment — and their CEOs are facing sanctions for their part in over aggressively marketing funds from Lime Asset Management, which turned out to be a 1.6- trillion-won ($1.4 billion) Ponzi scheme.

If the regulator chooses to impose the highest possible penalties, the brokerages could have their licenses pulled and their CEOs could be banned from the business for a number of years.

At the other end of the spectrum, the FSS could order a temporary closure of the brokerages and issue a written warning to the CEOs.

The highest penalties are rarely considered and have only been imposed once. In 2015, two CEOs of a securities company was banned from the business and had to resign as a result.

The FSS claims the punishment would be reasonable, as the CEOs failed to “establish internal control standards” as stipulated in Article 24 of Korea’s Act on Governance of Financial Institutions.

“If the FSS decides to impose the highest level of punishment on the CEOs, it is pretty much putting an end to their career, as a CEO's term normally lasts only a year,” a spokesperson from the Korea Financial Investment Association (Kofia) said. “Brokerage firms are skeptical about the efficacy of such harsh sanctions. We just don’t say it out loud, because of all the investors that suffered losses.”

According to a report by the JoongAng Ilbo, KB Securities submitted a petition to lawmakers at the National Assembly ahead of the review Thursday asking for a reconsideration of any sanctions recommended by the FSS. It argued that regulators should be partially responsible for losses caused by Lime, as they failed to do their job right.

KB Securities issued a denial, saying in a phone call with the Korea JoongAng Daily that documents were “not written nor given out by the company,” and it’s doing its best to figure out how the “scandalous documents have been leaked out."

Kofia is reportedly preparing a petition with other brokerage firms to request the FSS and the National Assembly have mercy on the CEOs embroiled in the Lime scandal. The association’s spokesperson declined to confirm the petition.

Whatever is decided by the FSS, brokerage firms can raise objections and take the FSS to court.

Hana Bank and Woori Bank, whose CEOs received reprimand warnings in April, filed administrative lawsuits against the regulator. CEOs of the three brokerage firms are likely to do the same once punishments are decided, according to analysts.

“The sense of crisis felt by the securities industry is intense,” said Kofia’s spokesperson. “Financiers are writing off high-risk investment products completely from their portfolios. The sanctions review is stirring up the entire industry.”

Banks are also subject to sanctions review soon. Shinhan Bank and Woori Bank will be called in for questioning after the brokerages.

The sanctions review for the three brokerage firms will resume on Nov. 5.