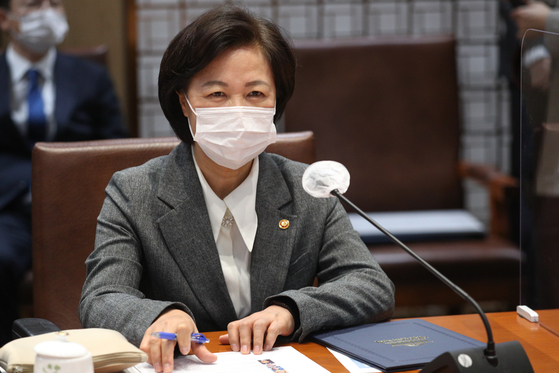 Justice Minister Choo Mi-ae attends a ceremony at the National Assembly on Friday to launch a committee to pick the first chief of the country's new Corruption Investigation Office for High-Ranking Officials. [YONHAP]


Tensions between the Moon Jae-in administration and state prosecution service are reaching a boiling point as a growing number of prosecutors openly speak out against Minister of Justice Choo Mi-ae's prosecutorial reform drive.

Around 230 rank and file prosecutors — representing around 10 percent of the approximately 2,000 prosecutors nationwide — reacted positively online to a posting from one of their own, Choi Jae-man, who slammed Choo on Thursday for her response to another prosecutor's open criticism.

The first shots in this escalating feud were fired by Lee Hwan-u, a member of the Jeju District Prosecutors' Office, who wrote on an online forum shared by prosecutors Wednesday that Choos' reform drive had "fundamentally failed" due to its political agenda aimed at quashing dissenting opinions in the prosecution service.

"I feel the powers to appoint personnel, direct investigations and audit institutions have been abused without any attempts to conceal the agenda and purpose behind them," Lee wrote.

The comments referred in particular to a series of orders given by Choo ordering prosecutors to launch investigations into several high-profile political cases. The rationale given by the minister about exercising her rarely used prerogative to conduct these probes was that Prosecutor General Yoon Seok-youl was reluctant to do so due to his politically compromised position as an opponent to the administration's prosecutorial reforms.

But the combative minister hit back at Lee's criticism, posting on her Facebook page a link to an investigative report alleging the prosecutor had inappropriately detained a suspect in an attempt to cover up misdeeds of a fellow prosecutor.

"Good," she wrote in reference to Lee. "Coming out like this tells us that reform is the only answer."

That comment merely inflamed rank and file prosecutors, whose resentment toward the administration has been building as Choo and her predecessor, Cho Kuk, reined in their powers and challenged the agency's tendencies to meddle in politics.

Choi, a prosecutor in the Chuncheon District Prosecutors' Office, led the charge against Choo in a posting uploaded Thursday, accusing the justice minister of clamping down on figures in the prosecution service critical of the administration under the guise of prosecutorial reform.

"Like prosecutor Lee, I too don't know whether this government is a virtuous or unjust power, but I know that it is certainly wrong for political authorities to crack down on the prosecution," Choi wrote. "I too am coming out."

Around 230 prosecutors, identified by their real names and titles, wrote comments of support on Choi's posting, testifying to just how widespread dissent toward the administration's reform agenda was among ordinary prosecutors.

Supporters and allies of the administration are fighting back to win over public support.

"[Prosecutors] have investigated and indicted on whim, so what's the intention behind their selective obedience and selective defiance?" Cho wrote.

Over 200,000 signatures have also been collected on an online petition uploaded to the Blue House website calling on dissenting prosecutors to resign for attempting to derail reforms supported by popular will.

The growing tension within the country's law enforcement institutions comes amid Minister Choo's feud with the country's top prosecutor, Yoon, who is currently being audited by the ministry over accusations he prevented investigations into his own family and close associates.

Yoon is also being audited by the ministry on whether he was involved in an alleged cover up of an ongoing financial fraud case in which a suspect claimed he bribed prosecutors and opposition politicians.