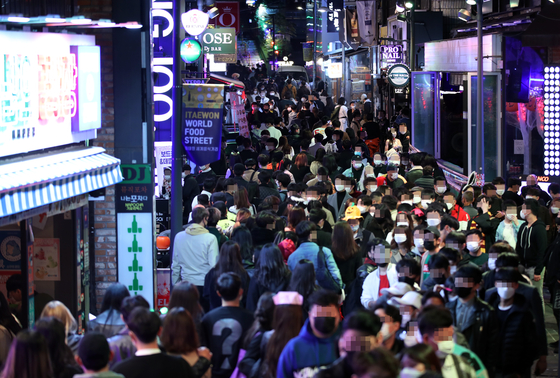 The new measures came as the Korea Disease Control and Prevention Agency (KDCA) announced Sunday morning that the nation added 124 new infections of the coronavirus Saturday, the fifth day in a row that the daily tally was above 100.

No large-scale clusters have been reported yet from Halloween revelry last Saturday in bars in Itaewon, central Seoul; Hongdae, western Seoul; and Gangnam District, southern Seoul. Many popular nightclubs closed that day in compliance with recommendations from the Seoul Metropolitan Government, which feared partygoers spreading the virus like in May, when a cluster of some 300 coronavirus infections emerged from several nightclubs in Itaewon.

Yet many bars remained opened and long lines were seen outside some.

In his opening remarks during a meeting of the Central Disaster and Safety Countermeasure Headquarters, Prime Minister Chung Sye-kyun said the new five-level social distancing guidelines were aimed at stabilizing a “sustainable” preventive system in Korea. Chung emphasized the new guidelines are more detailed than the previous system announced four months ago.

The new guidelines will officially go into effect Saturday. 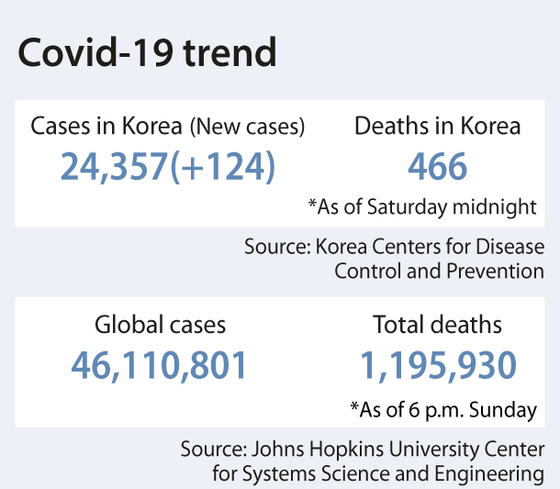 In the past, the central government usually imposed one of three social distancing levels for the entire nation, even when most new infections were coming from hot spots limited to a few areas. In the new system, the country will be divided into seven areas, and each zone will be monitored separately. That means one area can be subject to Level 1, while another is subject to Level 3.

In the past, the main criterion for deciding whether to adjust the social distancing level was the number of new infections detected nationwide over the prior two weeks. Now, that has been shortened to a single week.

In Level 1.5, some facilities such as churches will be obligated to limit the number congregants allowed into their buildings, while events involving 100 people or more can be banned.

In Level 2, any events involving 100 people or more will be prohibited, while nightclubs and bars that allow dancing will be forced to shut down. Restaurants won’t be allowed to receive customers after 9 p.m., but takeout will be allowed.

In Level 2.5, events involving 50 people or more will be banned and noraebang (singing rooms) will be ordered to shut. Other public facilities where people tend to mingle or keep a short distance from one another will be forced to shut after 9 p.m.

In the final Level 3, any events involving 10 people or more will be prohibited, and public facilities that were forced to shut after 9 p.m. in Level 2.5 will be told to close throughout the entire day. Such public facilities include public bathhouses, wedding halls, funerals, movie theaters, hair salons, amusement parks, study cafes, restaurants and coffee shops.