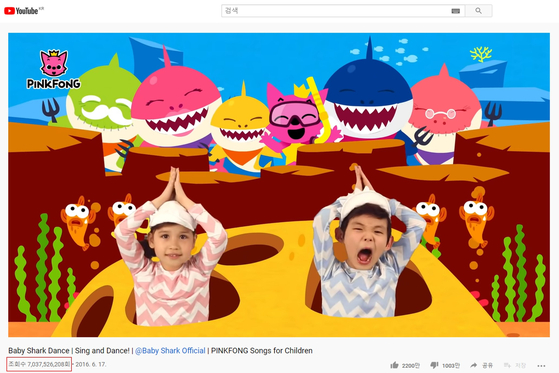 A screen shot of the Baby Shark Dance video, which became the most watched video on YouTube as of Monday with 7 billion views. [SMARTSTUDY]


The Baby Shark Dance video has become the most watched video on YouTube as of Monday with 7 billion views, beating the music video for American singer Louis Fonsi's “Despacito.”

The Baby Shark Dance is a version made from the original video of Baby Shark, created through children’s education entertainment brand Pinkfong, with added choreography so that children can watch the video and follow the moves. The original was posted on YouTube on November 2015, and the dance version went up in June 2016. It is the first time for a video targeting children to reach the top position, according to Smart Study, the producer of the video.


The dance video became the second-most streamed video in March with 4.6 billion views and took over the No. 1 spot only about eight months after. The video has been played in 236 different countries, proving its global popularity.

Last year the original song entered the Billboard singles chart at No. 32.