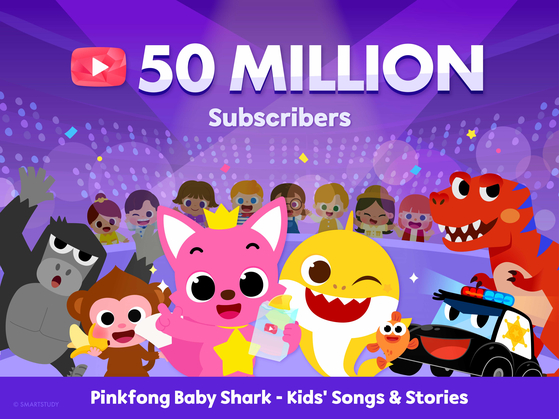 According to the brand, Pinfong’s YouTube channel “Pinkfong Baby Shark – Kids’ Songs & Stories” broke that number as of 2:38 p.m. on Tuesday, the first children’s education brand to do so.

Its main intellectual property is characters Pinkfong and Baby Shark. The singalong music video for “Baby Shark Dance” (2016) hold the title for the most-viewed video on YouTube with 8.8 billion views.

Since the Covid-19 pandemic, the brand also released series of sing-along music videos “Wash Your Hands with Baby Shark” in March 2020, which accumulated more than 52 million views.

“We were able to become the first local children’s education brand to reach 50 million subscribers due to the worldwide fans who love our Pinkfong,” SmartStudy’s CEO Kim Min-seok said in a statement. “SmartStudy will continue to contribute to plan, distribute, and collaborate with other businesses to create content that offer fun and meaningful experiences for the children.”