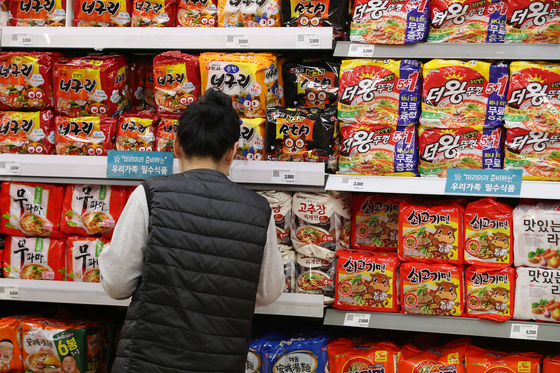 A customer shops at the ramyeon section of a supermarket in central Seoul. [YONHAP]

Despite the coronavirus outbreak dealing a heavy blow to Korea’s exports, shipments of food have gone from strength to strength — particularly ramyeon and kimchi.

According to the Ministry of Agriculture, Food and Rural Affairs, exports of ramyeon between January and September jumped up 36.3 percent compared to the same period a year earlier to $456 million, a new record for the first three quarters.

The figures are notable compared to other food exports like agriculture, which totaled about $5.52 billion for the first three quarters — only a 6.5 percent increase compared to last year. 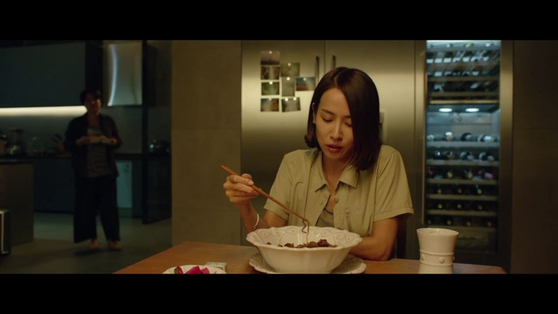 The huge popularity of ramyeon and kimchi overseas is largely thanks to Hallyu, or the Korean wave.

Ramyeon’s international popularity first began in China, Japan and Southeast Asia. Sales in Europe and America recently jumped up thanks to Chapaguri ram-don, which combines Nongshim products Chapagetti and Neoguri noodles, which blew up after appearing in the 2019 hit movie “Parasite.”

The growing popularity of cooking at home amid the prolonged Covid-19 pandemic is another driving force.

Ramyeon is typically popular for people who want a fast and convenient way to eat at home. To follow the trend, food companies are scrambling to launch many different types of ramyeon such as jajang (black bean) ramyeon, macaroni and cheese ramyeon, low-sodium ramyeon and stir-fried ramyeon.

Sales of kimchi have jumped up since the start of the coronavirus pandemic.

“[Even before the Covid-19 outbreak], Korean food has been gaining steady popularity due to Hallyu,” Kim Jae-hyung, an official from the export promotion division of the Ministry of Agriculture, Food and Rural Affairs, said. “But with the Covid-19 outbreak forcing people to spend more time at home, exports of ramyeon and kimchi shot up.”

The Ministry of Agriculture, Food and Rural Affairs said it will strengthen its marketing strategies to maintain and expand the recent popularity.

It plans to support local ramyeon companies to receive halal certifications so they can enter the Southeast Asian and Middle Eastern markets.

It also plans to hold a K-noodle promotional event in 26 retailers in the United States. Actress Cho Yeo-jeong, who played the mother that first brought up Chapaguri ram-don in "Parasite," will join the event.

To promote kimchi, the Ministry of Agriculture, Food and Rural Affairs also has a number of different ideas, such as making a QR code that takes the scanner to information about kimchi, preparing advertisement banners in subway stations and opening an international exhibition on kimchi.

“Along with efforts to expand exports of the agricultural products like grapes and ginseng, we will try our best to promote our traditional food culture and expand exports of kimchi and ramyeon,” said Park Byeong-hong, head of the food industry policy office at the Ministry of Agriculture, Food and Rural Affairs.