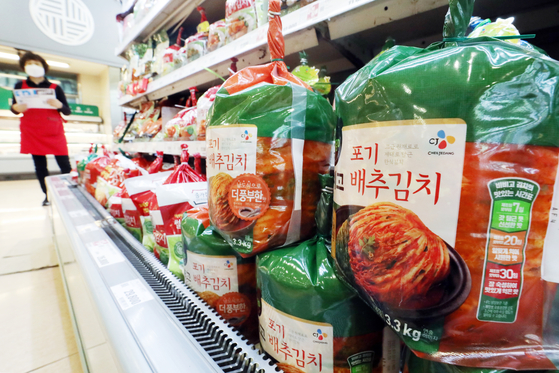 Kimchi products are displayed at a big discount mart in Seoul on July 6. [NEWS1]


There's kimchi and then there's kimchi, and the Korean government wants to be sure you're getting what you ordered.

Authentic Korean kimchi may soon be certified by the Ministry of Agriculture, Food and Rural Affairs. Under the program, which is already used for dozens of traditional products, a green mark will be added to the packaging identifying it as truly domestic and allowing the manufacturer to make claims as such.

It is known as the “geographical indication system,” bureaucratese for Made in Korea.

Sensitivity about the origins of the fermented napa cabbage dish has been on the rise in recent months as China has fired a number of salvos in the kimchi culture wars, going as far as to claim that kimchi is nothing but a type of paocai pickled vegetables.

A video clip titled “Kimchi making in China” was posted online. In it, a shirtless man in a giant tub up to his waist in a brackish brine is seen corralling cabbages. [JOONGANG PHOTO]


Anger turned to fear when a video showed up online in April of cabbages floating in a giant tub of brackish brine with a shirtless man up to his waist in the liquid corralling the vegetables. Neither the origins nor the authenticity of the clip were verified, but the suspicion that it exposes how kimchi is made in China further fueled the food nationalism.

The numbers suggest that Koreans are responding to the video and to the kimchi culture war. June imports of kimchi were down 21.8 percent on year, and that followed declines of 13.2 percent in May and 7.2 percent in April.

As 99 percent of kimchi imports are from China, sales of the product from that country are definitely down.

"The decline in kimchi imports is mainly due to the video clip that made consumers concerned about the safety of imported kimchi," said Park Ki-hwan, a researcher at the Korea Rural Economic Institute. "Consumer movements shunning imported kimchi are likely to continue, and the imports are expected to decline for a while." 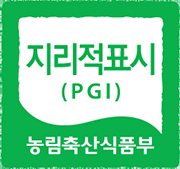 
The geographical indication system enables Korean businesses to certify that the product they sell is from a certain place and that it has the defining characteristics of that product.

To date, the system has been used for regional specialties, such as Boseong green tea, Haenam sweet potatoes and Cheongyang chili peppers. A total of 109 products have received the seal, which is placed on the packaging and includes the origin of the product and the name of the product in English.

It is administered by the National Agricultural Products Quality Management Service.

If the Ministry of Agriculture, Food and Rural Affairs extends the program to kimchi, “Korean Kimchi” would be stamped on the packages of certified products. Countries with free trade agreements with Korea would be obliged to accept this declaration as true.

The problem goes beyond just straight-up imports. Unscrupulous companies will often mislabel their products to obscure the origin. In the first six months of the year, the National Agricultural Products Quality Management Service received 420 complaints about false information or the lack of information about kimchi products. 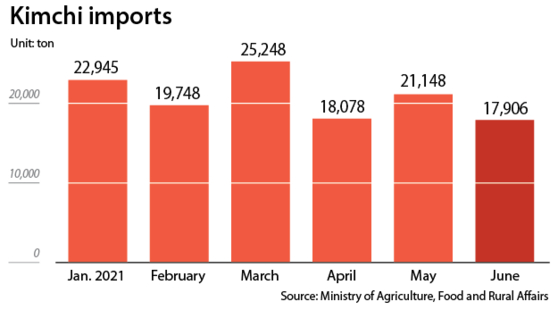 If the geographical indication system were applied to kimchi, the standards would be high and getting the stamp would not be easy. Kimchi made overseas could not get the certification, and that would disqualify many otherwise Korean products, as major kimchi manufacturers, such as Daesang and CJ CheilJedang, make kimchi in China and export it to Korea.

Even in the case of domestic manufacturing, raw materials must be locally sourced. Everything that goes into kimchi would have to come from Korea to get the coveted mark. That is not easy to do, especially given the increasing prices of commodities and the need to buy from the cheapest available supplier.

The price of green onions January to May on year rose 236.2 percent, while dried red pepper prices are up 99.8 percent and peeled garlic 92.6 percent.

"Using foreign-made raw materials is inevitable in some cases like red-pepper powder as domestic products are way more expensive than those imported," said a spokesperson from a large kimchi manufacturer. "In order to make kimchi, about 20 ingredients are needed."

When asked if they would switch to local kimchi from imported in the wake of the video, 67.9 percent of restaurants said 'no,' in a survey of 1,000 restaurants by the Korea Foodservice Industry Research Institute.

Price was the main reason.

"Manufacturers can raise their profitability when they have the wherewithal to buy raw materials at lower prices and store them," said Lee Ha-yeon, head of the Kimchi Association of Korea. "The government should support some small businesses so that they can operate storage facilities."

"We should also consider expand contract farming between farmers and kimchi-making companies," said Park from the Korea Rural Economic Institute.

Contract farming refers to the agricultural production carried out according to an agreement between a buyer and farmers. It is commonly seen as a suitable way of linking poor farmers to markets and improving the quality of kimchi.