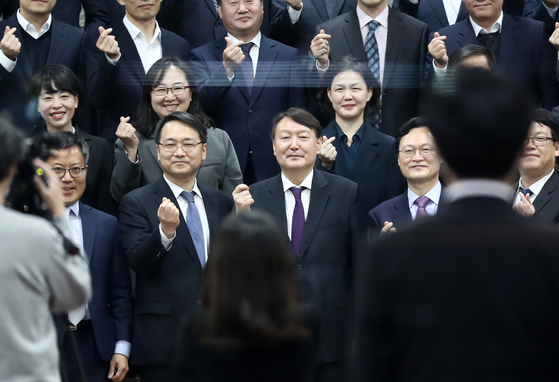 Prosecutor General Yoon Seok-youl, third from left in the front row, poses with prosecutors during a visit to a new prosecutors' training center in Jincheon, North Chungcheong, on Tuesday. [YONHAP]


Tensions between the state prosecution service and the Ministry of Justice continued to boil over Tuesday after Justice Minister Choo Mi-ae accused Prosecutor General Yoon Seok-youl of jeopardizing the prosecution’s political neutrality.

In a Justice Ministry statement, Choo said she was “seriously considering” the criticisms contained in a Blue House petition calling for the resignation of sitting prosecutors who publicly disparaged her push to reform the country’s prosecutorial service.

“As an institution vested with power, the state prosecution service is required to respect [political] neutrality more than any other public organization,” Choo said.

“I believe it is a very serious problem that the comments and actions of the prosecutor general, who sits at the apex of this institution, is damaging the political neutrality of the state prosecution service and eroding public faith in the organization.”

The remarks were a response to the growing number of signatures on the petition, which exceeded 400,000 as of Tuesday, calling for the mass resignation of prosecutors who openly criticized the justice minister’s handling of dissenting opinions in the state prosecution service.

Last week around 230 rank-and-file prosecutors — representing a little over 10 percent of the approximately 2,000 prosecutors nationwide — expressed support for an online post authored by one of their own, Choi Jae-man, who accused Choo of clamping down on figures in the prosecution service critical of the administration under the guise of prosecutorial reform.

This wave of support from prosecutors toward Choi's dissent was interpreted by the media as a precursor to collective action against the administration.

Prosecutors have mounted such collective actions before, usually in the form of rank-and-file prosecutors’ meetings, each time the government attempted to weaken their powers through institutional reforms.

And in almost every instance this has occurred — at least four times since 2003 — the prosecutors eventually won out after successive administrations backed down.

Such fierce resistance from the rigidly hierarchical state prosecution service was one of the reasons incumbent President Moon Jae-in put prosecutorial reform at the top of his law enforcement agenda at the start of his term.

Though he has been more successful than any of his predecessors — passing a bill last year to create a new state investigation agency focusing on crimes by high-ranking officials that broke the prosecution’s monopoly over indictments — Moon has had to weather intense opposition from prosecutors, who have apparently coalesced around a prosecutor general sympathetic to their cause.

Yoon, who openly defied the justice minister in a parliamentary hearing last month by stressing he did not take orders from her, has yet to clarify his position on the prosecutor's actions, but his recent posturing has been interpreted as attempting to shore up his position within the agency.

On Tuesday, Yoon visited a training center for new prosecutors in Jincheon, North Chungcheong, where he was expected to potentially make a statement on his ongoing feud with Choo.

While the Supreme Prosecutors’ Office denied the visit had any hidden agendas, the top prosecutor’s increasing political clout as a dissenting figure toward the Moon administration has prompted intense media scrutiny of his every move.

Analysts noted the visit also holds significance, as the institute in Jincheon is where Yoon’s ally Han Dong-hoon is stationed. Han, a senior prosecutor who had taken part in many of Yoon’s corruption busts, was accused earlier this year of colluding with a reporter to take down an ally of the administration, but has not been charged with any crime.