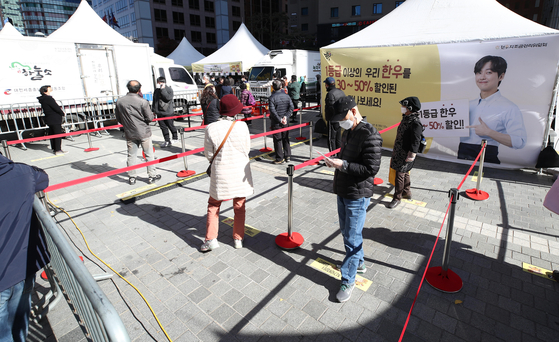 Health authorities started the country at the lowest level of the new five-tier social distancing system on Saturday, but it noted that the rating may not hold in the greater Seoul area given the rise in coronavirus cases.

The Level 1 designation and the warning came as the Korea Disease Control and Prevention Agency (KDCA) announced Sunday morning that 143 new Covid-19 cases were tallied nationwide Saturday, up from 89 cases on Friday. On Thursday, 145 new cases were counted.

Among Saturday’s total infections, 118 were local cases, including 54 in Seoul, 23 in Gyeonggi and two in Incheon, which together comprise the greater Seoul area.

Twenty-five cases were imported: five each from the United States and Turkey, three from Mexico, two each from India, Poland and Ethiopia and one each from Bangladesh, Uzbekistan, Myanmar, the United Arab Emirates, Romania and Ukraine.

The new five-tier social distancing system kicked off Saturday after the previous three-tier scheme expired to minimize shutdown orders for local businesses. The new levels are 1, 1.5, 2, 2.5 and 3.

In the past, the central government usually imposed one of three social distancing levels — Level 1, 2 or 3 — for the entire nation, even when most new infections were limited to a few areas. In the new system, the country has been divided into seven areas, with each zone being monitored separately.

In the past, the main criterion for deciding whether to adjust the social distancing level was the number of new infections detected nationwide over the prior two weeks. That has been shortened to a single week. 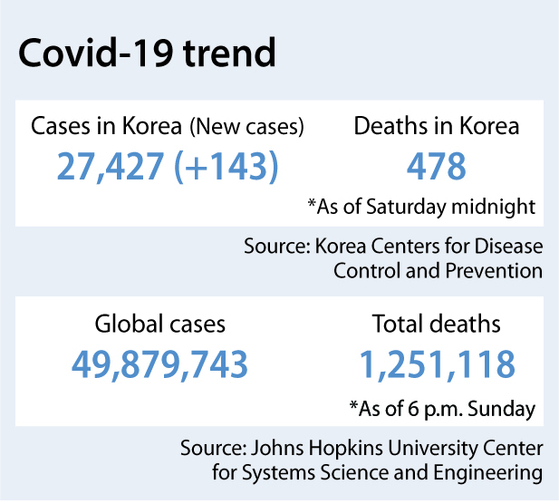 Up to Level 2.5, each local government office can discuss with central health authorities on changing the social distancing level designated by the central government — which is exactly what Cheonan and Asan, both in South Chungcheong, did over the weekend.

Central health officials said last Friday that the entire nation was safe to stay under Level 1, but Cheonan and Asan elevated their levels to 1.5 as a precaution following recent clusters.

In Level 1.5, people in clubs and bars that involve dancing are banned from dancing and table-hopping, and food isn’t allowed in noraebang (booth-type singing rooms) either. Wedding and funeral halls can only allow one person per four square meters (43 square feet) of floor space.

Sohn Young-rae, an official from the Central Disaster Management Headquarters, said last Friday during a press briefing that if coronavirus cases in the greater Seoul area continue to climb, officials may have to consider cranking the level up to 1.5.

No clusters of significant size are being observed in Seoul, Incheon or Gyeonggi, but several chains of infections have been identified.

Nationwide, one Covid-19 patient died Saturday, raising entire deaths to 478, while 58 patients recovered, bringing total recoveries to 24,968. As of Saturday at midnight, 27,427 coronavirus cases had been counted nationwide.