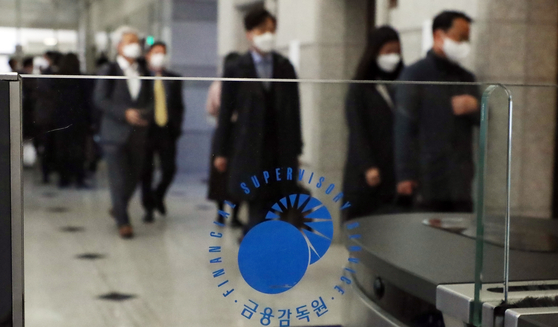 Executives from securities firms enter the Financial Supervisory Services building to participate in the third round of sanctions reviews on Nov. 10. [NEWS1]


Punishments for brokerages that pushed a Ponzi scheme on unsuspecting investors are to be relatively light, with the Financial Supervisory Service (FSS) targeting mainly retired executives and ordering selective and highly limited closings and unspecified fines in the Lime Asset Management scandal.

It could have been far worse, with the possibility of securities companies being shut by the authorities and put out of business.

The Lime scandal is a massive Ponzi scheme created by Lime Asset Management that resulted in the freezing of some 1.6 trillion won ($1.4 billion) in investments, shook the financial sector and had the potential to destabilize the economy. The firm’s president was arrested in July.

After three days of intense discussions between the FSS and the offending institutions, three former CEOs are to be suspended, despite not currently being on the job, and will be prohibited from taking new posts for three years: Kim Hyeong-jin, former Shinhan Investment CEO; Nah Jae-chul, former Daishin Securities CEO; and Yoo Kyoung-eun, former KB Securities CEO.

The financial regulator’s decision will not affect chairman Nah’s positions of the Korea Financial Investment Association (Kofia), according to a spokesperson from Kofia, as the organization is an interest group and not a financial company. Nah will maintain his position until his term ends in 2022.

Kim Byung-chul, the former CEO of Shinhan Investment, received a cautionary warning, the lowest of all the possible punishments.

Only one current executive was sanctioned by the FSS. Park Jeong-rim, chief executive of KB, received a reprimand. 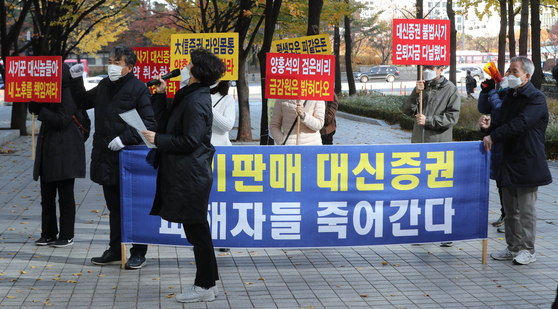 Investors that suffered losses from Lime funds stage a protest during the third sanctions review on brokerages in front of the FSS building on Nov. 10. [YONHAP]


Three brokerage firms — Shinhan Investment, Daishin Securities and KB Securities — will face financial penalties and will be forced to partially close some of their physical branches, the FSS announced. The exact amount of fines has not been decided yet.

In the case of Daishin Securities, the FSS will recommend the firm close its physical branch in Banpo, Gangnam in southern Seoul, considering that more than 1 trillion won worth of Lime funds were sold at the location. KB securities will have to suspend some of its businesses, the FSS said.

The decision announced Tuesday night could change after it is passed on to the Financial Services Commission for the final approval. Brokerage firms can raise objections at that point and could ultimately take the financial regulator to court to challenge the punishment.

Banks will also be subject to sanctions review soon. Shinhan Bank, Woori Bank and Hana Bank will likely be called in for questioning around December.

Industry officials said the sanctions recommended are “too heavy,” since brokerage CEOs are not responsible for the sales decisions made by company employees. They also expressed concerns it could drive the industry into a downturn in the future, as firms will avoid selling investment products with higher risk to minimize the chance of being penalized.

"Firms are even afraid to sell equity funds,” said a spokesperson from Kofia during a call with the Korea JoongAng Daily.

“This is concerning because other brokerage firms are awaiting FSS review on sanctions for their involvement in the Optimus Scandal. All we can hope for is that things get better [or penalties are lowered] at the FSC.”