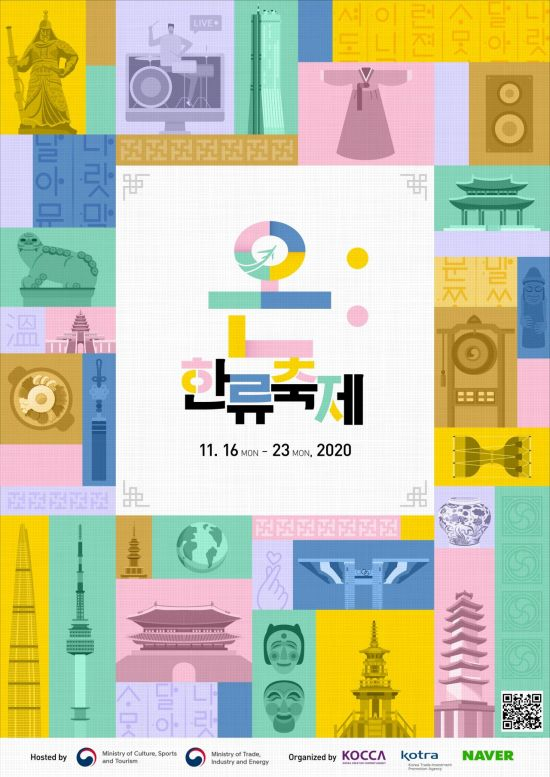 
The Korea Creative Content Agency will host the "On: Hallyu Festival" from Nov. 16 to 23, offering a chance for Hallyu fans and companies who are struggling amid the coronavirus pandemic to meet online.

The festival will be co-organized by the Ministry of Culture, Sports and Tourism in collaboration with the Ministry of Trade, Industry and Energy, Korea Trade-Investment Promotion Agency and Naver, to console Hallyu (or Korean Wave) fans feeling down because of Covid-19, as well as give Hallyu-related companies a chance to seek business opportunities overseas.

The "On: Hallyu Festival" comes as a part of the Culture Ministry's New Hallyu Promotion Policy announced in July, which promises to focus on promoting new Hallyu content exports to the global market with the help of already successful Hallyu content, such as K-pop, games and films.

On Nov. 16 and 17, programs for content creator companies that have been struggling due to the virus will take place. One-on-one export consultation sessions will be held online from 12 a.m. to 8 p.m., in joint efforts with the Indonesian K-Content Expo and ITS Game.

For Hallyu fans, a Live Commerce Program will provide an online and offline commerce event that makes use of television, music and performance. A fashion show will be held every evening at 8 p.m. on Naver V Live, and the clothes will be made available on Naver's Shopping Live service from Nov. 16 to 20.

A grand finale is to come on Nov. 23, with an online concert dubbed "Unite ON: Live Concert" to be held at 7 p.m. on Naver V Live.

Some of the biggest acts in K-pop, including boy bands SuperM and Monsta X, girl group ITZY as well as performance team Leenalchi, Ambiguous Dance Company, Idiotape and Jambinai, will take part.

"I hope that the first 'On: Hallyu Festival' becomes an iconic Hallyu festivity that allows not only high quality Korean content, but also related Hallyu industries, to spread across the world," said Culture Minister Park Yang-woo.

"The festival will give a helping hand for people around the world who have been stricken by Covid-19 to feel consoled, and local companies as well."