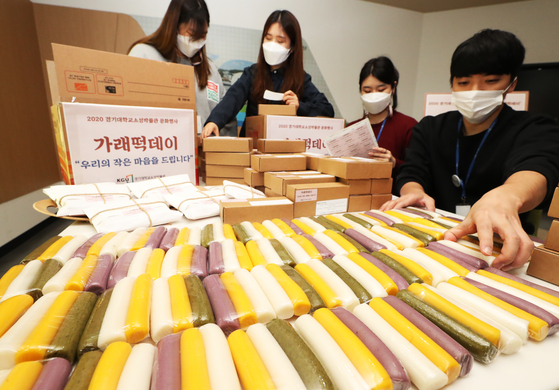 Students at Kyonggi University in Suwon, Gyeonggi, package tteok (sticky rice cake) Wednesday on the school's campus to be delivered to frontline medical workers in the city on Farmers’ Day. [YONHAP]

A nightclub in Cheonan, South Chungcheong, will be slapped with a penalty for disobeying health guidelines by allowing customers to dance, officials there announced, making it one of the first establishments to face punitive measures in the country’s new five-tier social distancing system.

The announcement came as the Korea Disease Control and Prevention Agency (KDCA) said Wednesday morning that the nation added 146 new cases Tuesday, up from 100 the day before. It was the fifth day in a row that daily new cases reached triple digits.

Cheonan is among four cities in the nation where municipal governments have gone out of their way to elevate the social distancing level to 1.5 in response to rising local infection rates, even though central health authorities announced last Friday the entire country was safe to stay at the lowest Level 1 for a week.

The five levels in the new social distancing system, which launched last Saturday, are Level 1, 1.5, 2, 2.5 and 3. Up to Level 2.5, each local government office has the authority to change its social distancing level after consultation with central health authorities, which is what the cities of Cheonan and Asan in South Chungcheong, Wonju in Gangwon and Suncheon in South Jeolla did over the past week. 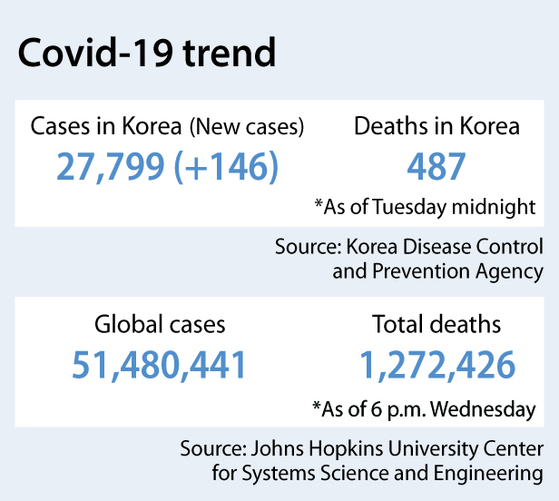 At Level 1.5, people are not allowed to dance or table-hop at nightclubs and other nightlife businesses, but Cheonan officials said Wednesday that one nightclub was busted doing just that at around 3 a.m. last Saturday. Officials did not provide the name of the club, but said it will be slapped with a penalty of 1.5 million won ($1,350).

Officials Wednesday said they were also considering additional punitive measures, like forcing the nightclub to close for up to three months.

Of Tuesday’s total cases, 113 were domestic cases, mostly from the greater Seoul area, with 39 in Seoul and 42 in Gyeonggi. Ten were in South Gyeongsang, eight in Gangwon, six in South Chungcheong, three in Busan, two in Gwangju and one each in Daejeon, North Chungcheong and North Jeolla.

Of 33 imported cases, 12 were from the United States, five from Uzbekistan, two each from India, Russia, Hungary, Germany and Romania and one each from Indonesia, Myanmar, Mexico, Zambia, Algeria and Sudan.