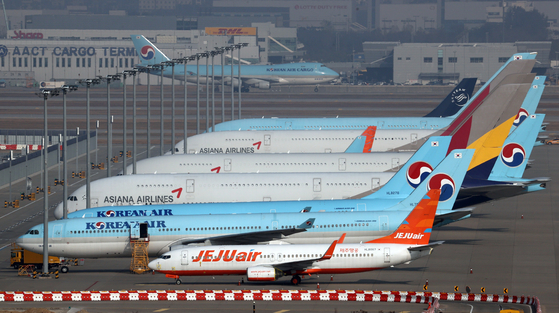 Korean Air and Asiana planes parked at Incheon International Airport on Monday. Korean Air will be acquiring Asiana with help from KDB. [YONHAP]


The new airline will become the world’s No. 7 carrier by capacity to transport passengers and cargo, according to 2019 IATA numbers provided by KDB.

On Monday, the bank announced that it will indirectly provide financing to Korean Air Lines, which will use those funds and additional proceeds from a stock sale to buy a significant stake in Asiana Airlines.

In the complex transaction, KDB will invest 500 billion won ($451.6 million) in Hanjin KAL and buy 300 billion won of the company’s exchangeable bonds. Hanjin KAL, which already owns 29.27 percent of Korean Air Lines, will buy 730 billion won of a 2.5-trillion-won share offering by the airline.

Hyundai Development Company, which agreed to acquire Asiana last December, agreed to pay 2.5 trillion won for the company before the deal fell through in September.

“The latest decision was made out of concern that the normalization of Korea’s airline industry could be uncertain even after the pandemic without a fundamental improvement in competitiveness,” KDB said in a statement issued Monday.

“The latest transaction will help the integrated airline have competitiveness on par with the global top 10.”

Budget carriers owned by the two airlines — Jin Air, Air Busan and Air Seoul — will be absorbed by the parent company and loyalty programs will be integrated.

Hanjin KAL and Korean Air Lines approved the acquisition during board meetings on Monday.

KDB is investing in Hanjin KAL in order to help maintain stability of the ownership structure, Hanjin Group said in a statement.

“To minimize the use of public capital amid the crisis faced by the airline industry, restructuring of the overall aviation industry, including Korean Air Lines and Asiana Airlines as well as low-cost carriers like Jin Air, is desperately needed,” the group added.

Hanjin KAL noted that countries with populations of under 100 million usually have only one mega-carrier.

Operating two full-service carriers has reduced the competitiveness of Korean airlines in the global market compared to national airlines in places like Germany, France, Hong Kong and Singapore. After an acquisition, the Korean carrier could reach the level of other mega-carriers in terms of aviation routes and the number of aircraft.


As of last month, Asiana Airlines operated 81 aircraft and Korean Air 164. Revenues for the combined entity is estimated at 15 trillion won.

“Even after the acquisition, [I] will focus all capacity and prioritize keeping jobs at both companies,” Hanjin KAL Chairman Cho Won-tae said in a statement.

The decision was not welcomed by Korea Corporate Governance Improvement (KCGI) and labor unions of the two airlines.

The stake of the coalition will be diluted if KDB becomes the third largest shareholder of Hanjin KAL. It could stand in the way of a shareholder challenge to Cho Won-tae and his allies.

KCGI “disagrees with Chairman Cho Won-tae’s attempt to defend his management rights and acquire Asiana Airlines purely using the public’s tax without spending a dime from his own pocket,” it said in a statement on Monday. “Chairman Cho Won-tae’s attempt is forcing a unilateral sacrifice from shareholders and employees of Hanjin KAL and Korean Air Lines without considering their interests.”

KCGI suggested allowing all shareholders to participate in the capital increase of Hanjin KAL, and having KDB purchase any shares not sold. It said it will take all possible legal measures to stop the acquisition.

Labor unions of Korean Air Lines and Asiana Airlines jointly pointed out on Monday that the airline’s acquisition of its rival would generate unemployment concerns due to the overlapping workforces.

“The merger and acquisition agreed by KDB, the government and Hanjin KAL without including the opinions of workers must be withdrawn,” said the unions in a statement on Monday.