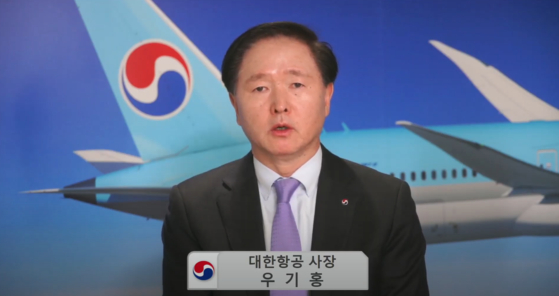 
A mega carrier with 28,000 employees will emerge intact and under one name from the Korean Air Lines purchase of Asiana Airlines, the CEO of the acquirer promised.

Not a single layoff will be needed as two massive carriers are made into one during one of the most difficult periods in the history of commercial aviation.

Korean Air Lines President Woo Kee-hong commented on the transaction during an online press event just a day after a major legal victory for the carrier and its financial backer. Though no questions were taken during the online event and little new information was offered, the company’s top executive did confirm some basic facts and emphasized key points.

“There won’t be any artificial layoffs from the merger. That is part of the contract,” Woo said during the event, referring to the highly restrictive document that was signed so that Hanjin KAL can get its hands on the 800 billion won ($725.6 million) of funding it needs to get the deal to work.

In the deal, Korea Development Bank (KDB) will invest in Hanjin KAL, which will buy shares of Korean Air Lines to help in its acquisition of Asiana Airlines.

“Hanjin KAL will appropriately respond” to any lawsuits that might be filed by Korea Corporate Governance Improvement (KCGI), Woo added.

KCGI, the company’s largest shareholder, last month asked for a court to issue an injunction prohibiting the sale of Hanjin KAL stock to KDB. The court rejected the request Tuesday.

Woo said he is confident that Korean Air Lines won’t have problems acquiring its rival.

“The combined market share of Korean Air Lines and Asiana Airlines in terms of passenger slots at the Incheon International Airport is 38.5 percent, or 40 percent including cargo aircraft,” said Woo. “There won’t be major monopoly concerns.”

He also noted that the related low-cost carriers to be rolled into one will not create antitrust concerns, insisting they will be rivals with the mother company.

Hanjin KAL owns 60 percent of Jin Air, while Asiana Airlines has Air Busan and Air Seoul as its subsidiaries.

“There have been a lot of mergers and acquisitions amongst airlines [globally], but as far as I am aware, there hasn’t been a case the deal was rejected,” he noted.

Following due diligence on Asiana Airlines, Korean Air Lines plans to seek approval of the acquisition from antitrust authorities in Korea and abroad by Jan. 14.

Korean Air Lines couldn’t confirm how many countries from which it requires approval, but said it will need the green light from the United States, European Union, China and Japan at least.

Following the acquisition, the existing brand will be kept, and all planes will eventually fly under a single name.

“There isn’t enough time or investment funds to [create] a new brand.” Woo said, adding that the acquisition is expected to generate 300 billion won in synergy effects.

These include the increase in passenger traffic as a result of an improved flight schedules, lower aircraft leasing costs and the improved credit rating of Asiana Airlines, which will reduce interest payments.