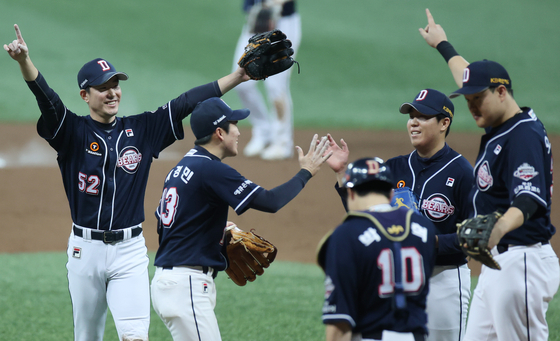 The Doosan Bears celebrate after picking up a 5-4 victory against the NC Dinos in Game 2 of the Korean Series at Gocheok Sky Dome in western Seoul on Wednesday. [YONHAP]


The Doosan Bears balanced out the Korean Series with a 5-4 victory against the NC Dinos at Gocheok Sky Dome in western Seoul on Wednesday.

After a scoreless first inning, the Bears were the first to score at the top of the second. It started out with a walk to Bears’ infielder Kim Jae-ho. Then, Dinos’ starter Koo Chang-mo allowed a double to Jose Fernandez. Koo allowed himself some breathing room by striking out Oh Jae-il, but the young Dinos pitcher got himself in trouble once again.

Koo allowed an infield hit to Park Kun-woo and with a throwing error from the third baseman, the Bears added the first run of the day. Then, with Heo Kyoung-min’s grounder, Fernandez made it back to the home plate safely, adding another run for the Bears.

Although the Bears were up 2-0, the Dinos quickly fought back at the bottom of the second. The Bears’ starter started out the inning strong by striking out Dinos’ catcher Yang Eui-ji but quickly allowed a double to Park Sok-min and a hit by pitch to No Jin-hyuk, allowing the Dinos to load the first two bases with only one out.

Then, with Kwon Hui-dong’s single, the Dinos’ added their first run of the day. They kept their chances alive as Aaron Altherr was walked, but a double play off Kang Jin-sung’s hit quickly ended the inning.

For the Dinos, Game 2 was quite unlucky as what could have been considered “good” hits ended up being flyouts or grounding into double plays.


While the Dinos struggled to add a run to the scoreboard, the Bears continued to slowly pile them up. At the top of the fourth inning, Kim Jae-ho hit a single home run to extend the lead and the Bears managed to add another run at the top of the eighth.

Finally, at the top of the ninth, Fernandez once again helped the Bears extend their lead with a huge single homer.

This allowed the Bears to take a 5-1 lead. Right when it seemed like the Bears were going to walk away with an easy Game 2, it turned out that if it hadn't been for Fernandez’s homer, it could have been a very different result.

At the bottom of the ninth, the Dinos started to fight back. With one out, they quickly loaded the bases and Altherr hit a single to bring Yang back home. Then, Kang hit another single right in front of the left fielder to bring two more runners home.

This took the Dinos to within one run of the Bears at 5-4, and also forced the Seoul club to pull closer Lee Young-ha from the mound. The Bears put Kim Min-gyu on the mound and the 21-year-old pitcher made sure to get the work done.

Despite having almost little to no experience, Kim is a surprise star in this year’s postseason. Once again, he proved that his previous performance wasn’t just luck. Kim struck out Park Min-woo and grounded out Lee Myung-ki to finish the game.

The two teams will be given a day off on Thursday and the Series will resume at Gocheok Sky Dome in western Seoul for Game 3 on Friday. The Korean Series is being played in a best-of-seven series.