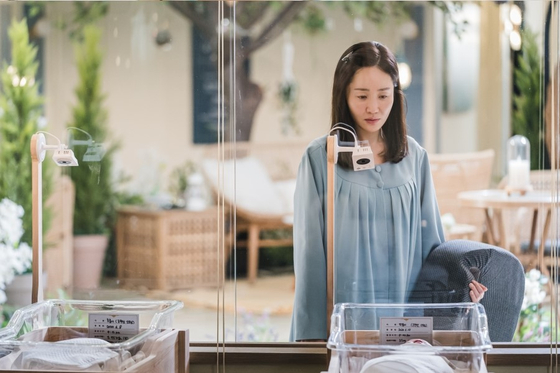 
“I really did not know the real side of the mothers who could not admit that they were hurting. Nobody told me becoming a mother is not only filled with happiness — sometimes it’s sad, miserable and painful.”

These lines come from the protagonist of the now-airing tvN drama series “Birthcare Center,” a story about a workaholic executive of a cosmetic company named Oh Hyun-jin who becomes pregnant and gives birth, and the happenings at the postnatal care center.

The drama series only consists of eight episodes and is scheduled to end next week, but the whirlwind of responses the story has already elicited is proof of the impact it's having. 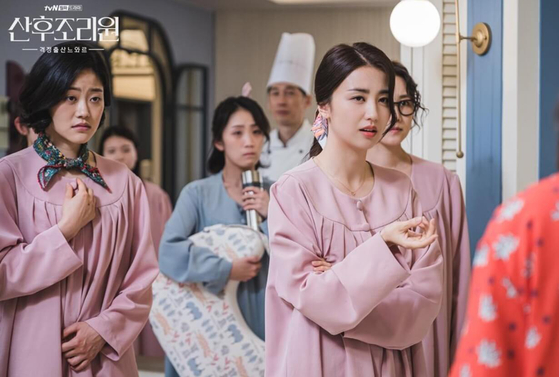 The mothers at the postnatal care center are currently reigned by the mother of Sarangi (played by Park Ha-seon) who is the model example of the mother that society expects. Her reign starts to crumble when single mother Lee Ruda enters the center. [TVN]


The group of mothers at the postnatal care center is largely divided into two groups: The mother of Sarangi, who sticks to her opinion that motherhood is pure and sacrificing herself for her children is a natural instinct that immediately comes to all mothers after they give birth; and the mother of Yomi, or Lee Ruda, who prefers to be called by her own name instead of someone else’s mother. She believes her own pursuit of happiness is just as important as her child’s.

The series begins with a detailed description of the process of childbirth from a mother’s perspective and tackles issues such as breast feeding versus bottle feeding, stay-at-home mothers versus working moms, and maternity leave and career breaks.

But “Birthcare Center” is not the first series to tackle to the rarely portrayed challenges of motherhood.

In 2018, a Naver webtoon that was considered to be sensational was cartoonist Shosho’s “On Having a Baby,” which, using cute animal characters and doodles, meticulously described the physical changes that a woman’s body goes through during pregnancy.

The comments that received the most likes were praises like, “Your webtoon is 100 times, no, 1000 times better than the sex education that I receive at my school,” or “There are a lot of idiots who think that babies just pop out, but it’s so hard to give birth to a child.” Many comments also detail personal stories of the hardships of pregnancy and childbirth, and criticize the lack of information and sex education for young people.

“Although there has been content related to pregnancy and infant care, there hasn’t been one that [directly] shows those topics through the medium of postnatal care centers,” culture critic Jeong Deok-hyun said. “For a drama series, how the story approaches such issues is relatively new, and they are topics that are rarely discussed [in depth] in Korea.” 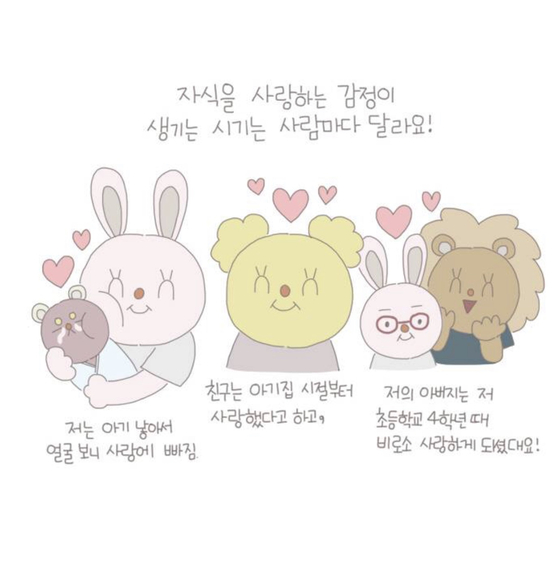 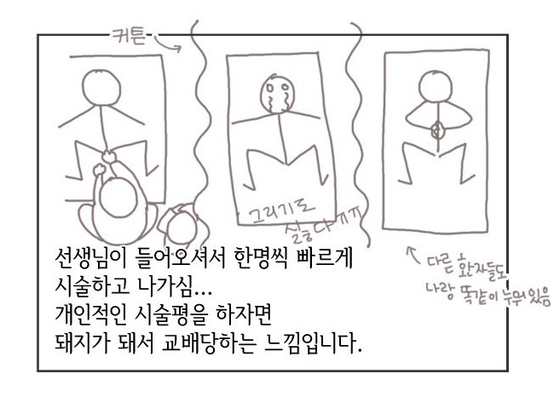 Scenes from the Naver webtoon ″ On Having a Baby,″ which explain in detail the physical changes and process of pregnancy and childbirth that a woman goes through. [NAVER WEBTOON]


In an interview excerpt with the writer Kim Ji-soo released by the production crew, Kim revealed that her inspiration to write the drama came from her own personal experience.

“Motherhood is always portrayed as a sacred and beautiful thing, but the motherhood that I felt was [different] — and I thought it would be fresh and interesting to craft [my experience] into a story,” Kim said.

“First of all, there was a gap between the motherhood that I’d imagined and what I felt. I thought, once I became a mother, I would gladly sacrifice myself [for my baby], but it was so hard. And I felt guilty that I was complaining about it. Everyone says motherhood is an instinct and I blamed myself for being a mother without that instinct.”

But Kim said that as time passed, she began to see things differently.

“Everything was a first for me, and strange — and my body wasn’t even fully recovered yet, and of course I couldn’t be a perfect mother from the start,” she said. “I didn’t know why I was in such a hurry. Every day we come across a different situation and we may make mistakes or act awkwardly. I hope that people can be more generous with themselves instead of beating themselves up. And I hope my story can boost people’s spirits — even if we are not perfect right now, we are doing fine.”

Responses that followed were largely positive. Some of the comments on clips of the drama on YouTube read, “It’s slightly moving and interesting to think that my mom went through this when she had me,” or “I could really feel the pain of pregnant women through the different situations these mothers are in, such as single mothers, working moms, stay-at-home moms and celebrities.”

“I sympathized with Hyun-jin who tries and fails to be a good mother, blames herself, but [in the end] grows into a better mother than she was before,” a viewer in her 50s, who only wished to be known by her surname Kim, wrote.

Another avid viewer in her 40s, who only wished to be known by her surname Park, was drawn to the story.

“I was attracted to the series for its breaking of stereotypes and how it merges comical and mysterious elements within the story,” she said. “I’m also watching the show feeling empathetic toward Hyun-jin’s situation, a working mom in her 40s who is losing confidence in her career path after giving birth.”

There have also been critical responses online that point out that the realities of childbirth are much more wretched than what the show portrays. One YouTube comment reads that the scene in which the mothers run around the center is “abnormal.”

“You can’t run around like that while you’re at the center,” it reads. “When you have a natural birth, you can barely walk.”

However, culture critic Jeong says that the writer’s intention was loud and clear — and he gives points to Kim for her efforts to craft a story that can capture the attention of people of all ages and gender.

“The story is very satirical, like how the mothers are grouped,” he said. “It’s similar to how society views such matters differently. The story clearly has a viewpoint on what pregnancy and childbirth means to women and women with social standings. It’s about how they become mothers.”

For Kim Tae-hee, motherhood is a welcome role