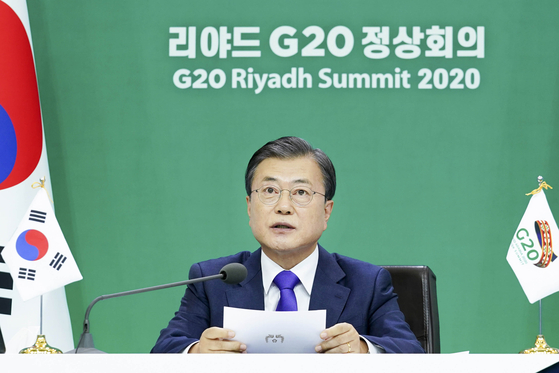 President Moon Jae-in speaks in a virtual meeting of the two-day Group of 20 summit which concluded Sunday. The G-20 leaders adopted a joint declaration calling for the affordable and equitable access of Covid-19 vaccines and therapeutics for all people. [JOINT PRESS CORPS]

President Moon Jae-in and other leaders of the Group of 20 (G-20) major economies wrapped up the two-day G-20 summit Sunday and adopted a joint declaration which committed to “affordable and equitable access” to Covid-19 vaccines and a “more environmentally sustainable and inclusive future” for all people.

Moon also reaffirmed Korea's pledge to become carbon neutral by 2050, speaking during the second session of the G-20 Riyadh summit Sunday, which focused on building an “inclusive, resilient future,” according to Blue House spokesman Kang Min-seok.

“Reaching carbon neutrality by 2050 through changing the structure of businesses and energy supply is a bold challenge that can only be resolved through international cooperation," Kang quoted the president as saying. He added that Seoul will “keep pace with the international community” toward this goal.

Moon shared that Korea plans to draw up a long-term strategy to achieve its goals and place weight on a “green economy.” The president explained the Green New Deal aiming for sustainable growth and Korea’s transition to a low-carbon economy, a part of his administration’s national development strategy, the Korean New Deal.

Moon also expressed his wishes for the Partnering for Green Growth and the Global Goals 2030 (P4G) hosted by Seoul next year to become a “stepping stone” for the 26th United Nations Climate Change Conference of the Parties (COP26) to be hosted by Britain in 2021.

The summit this year was hosted virtually by Saudi Arabia, and the G-20 countries, including the United States and China, adopted a leaders’ declaration addressing the Covid-19 pandemic, recovery and ensuring a sustainable future.

The Riyadh Leaders' Declaration said the G-20 countries have “mobilized resources to address the immediate financing needs in global health to support the research, development, manufacturing and distribution of safe and effective Covid-19 diagnostics, therapeutics and vaccines.”

It added, “We will spare no effort to ensure their affordable and equitable access for all people.”

On climate change, the declaration stated, “As we recover from the pandemic, we are committed to safeguarding our planet and building a more environmentally sustainable and inclusive future for all people” and recognized the “key importance and ambition of reducing emissions.”

The G-20 leaders also stressed the importance of supporting the multilateral trading system.

The leaders in the declaration agreed to “commit to ensuring that global transportation routes and supply chains remain open, safe and secure” and to “continue to explore concrete ways to facilitate the movement of people in a way that does not impede our efforts to protect public health.”

President Moon during the summit had especially stressed the importance of allowing essential travel, especially for businesspeople, across borders.

The leaders underscored “the urgent need to bring the spread of the virus under control, which is key to supporting global economic recovery.”

The leaders also endorsed the Circular Carbon Economy (CCE) Platform to manage global greenhouse emissions with its “4 Rs” framework to reduce, reuse, recycle and remove. They recognized the “key importance and ambition of reducing emissions, taking into account the system efficiency and national circumstances.”

The statement defined CCE as “a voluntary, holistic, integrated, inclusive, pragmatic and complementary approach to promote economic growth while enhancing environmental stewardship through managing emissions in all sectors including, but not limited to, energy, industry, mobility and food.”

The joint declaration urged countries to abide by obligations under the Paris Agreement. But in what was likely his final multilateral summit, U.S. President Donald Trump in a session on Sunday was quoted as claiming that the Paris climate accord “was not designed to save the environment” but rather was “designed to kill the American economy.”

Trump has often rejected the science of climate change, and walked away from the Paris climate accord. U.S. President-elect Joe Biden has pledged to rejoin the Paris agreement.

After completing a series of virtual meetings including the Asia-Pacific Economic Cooperation (APEC) summit on Friday and the G-20 summit over the weekend, Moon took his first annual leave of the year on Monday.