A scene from the “Borderless″ music video released last week as a part of Nexon's new arts and culture project titled the “Borderless Project.” [NEXON]


Nexon will launch a new arts and culture project titled the “Borderless Project” at the Nexon Foundation with a video of an open discussion session titled “Borderless: A Tiki-Taka Conversation on Games” on Sunday evening.

According to Nexon, a Korean–Japanese video game publisher that specializes in online games for PC and mobile, the “Borderless Project” comes as a part of its cultural business which it has been pursuing through various events. The aim of “Borderless” is to bring down the borders of games and art while also heightening social awareness of games.

Nexon held its first exhibition titled “Borderless: inspired by Nexon” in 2012 on the idea of the interaction between art and games, and the second in 2019 titled “Game a Game/invite you,” featuring 20 media artworks based on the company’s games and data from over the years to celebrate its silver jubilee. 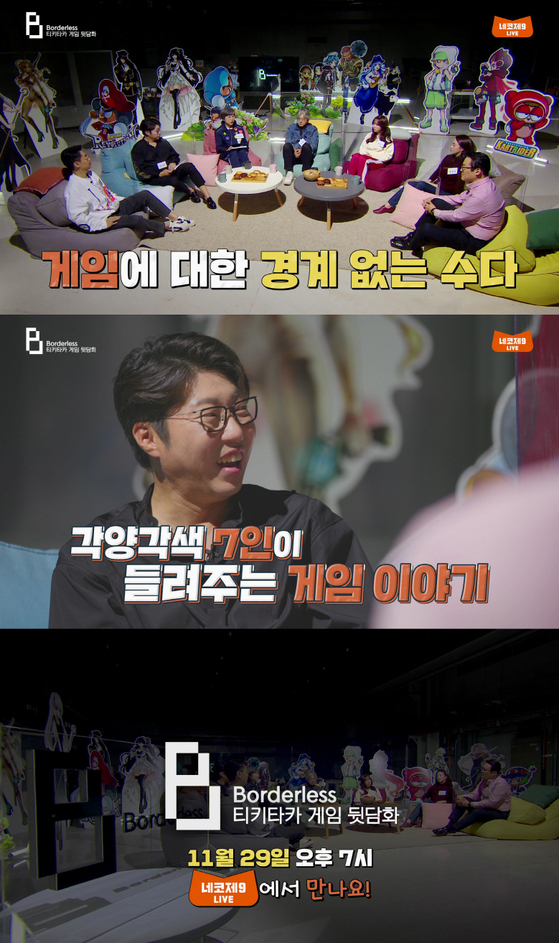 Captured images from a video of an open discussion session titled “Borderless: A Tiki-Taka Conversation on Games” to be revealed on Sunday evening. [NEXON]


Nexon’s other art projects include funding the Korean Pavilion at the 2013 Venice Biennale and the New York Queens Museum through the Nexon Culture Diversity Fund, funding the 2015 music film “Whiplash” and importing documentary “Cries from Syria” (2017) and starting a campaign to help Syrian refugee children.

Details of the new “Borderless Project” have not been revealed yet, except for teaser videos of the upcoming discussion video as well as two music videos titled “Borderless Elements: 0/1” and “Borderless Game: Connect & Play” released last week on YouTube.

Directed by Min Jun-ho, leader of theater company Ganda, the two music videos show people breaking down the borders of the real and virtual world to communicate with characters within games. The music was directed by Won Il, who also directed the music for the 2018 PyeongChang Winter Olympics opening and closing ceremonies, and the modern ballet choreography was created by choreographer Kim Seol-jin and ballerino Lee Sun-tae.

The “Borderless: A Tiki-Taka Conversation on Games” video will feature game experts including Choi Yun-ah, the director of the Nexon Computer Museum, game content creator Great Library (otherwise known as BuzzBean) and Kim Kyung-il, the head of Game Culture Foundation. The video will be released through Nexon’s official YouTube channel.