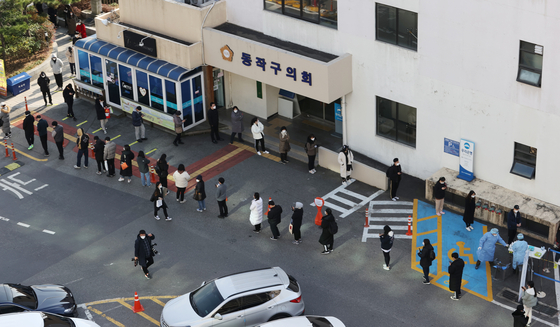 People line up to get tested for Covid-19 at a test center installed at the parking lot of the Dongjak District Office in southern Seoul due to concern over a cluster of cases linked to a nearby Noryangjin cram school and amid a third wave of infections in the country. [YONHAP]

New Covid-19 cases surged to nearly 400 Wednesday, with the virus's re-emergence affecting everyone from soldiers to prison inmates as health officials warn of a potential shortage of intensive care units.

The country added 382 new Covid-19 patients as of Tuesday midnight, bringing total cases to 31,735, according to the Korea Disease Control and Prevention Agency (KDCA) Wednesday.

“If the current rate of Covid-19 infections continues, then there could be a shortage of intensive care units within two to three weeks,” said Son Young-rae, a senior KDCA official, in a briefing.

There are a total of 115 hospital beds available for critically ill Covid-19 patients, according to the KDCA.

Of the 363 local infections, 139 were from Seoul, 77 from Gyeonggi and 39 from Incheon. But new cases are emerging nationwide in 16 of the country’s 17 cities and provinces. Authorities reported 18 new virus cases in Busan, 18 in South Chungcheong, 14 in Gwangju, 12 in Gwangwon, 10 in South Gyeongsang, five in Daegu and three in Jeju.

There were three additional deaths, raising the total coronavirus fatalities to 513.

With the exception of Monday's 271 new patients, tallies of new infections have surpassed 300 every day during the past week.

Daily infections during the country's second wave peaked at 441 new cases on Aug. 27.

The spike in cases comes just ahead of the College Scholastic Ability Test (CSAT) on Dec. 3, when an estimated 500,000 high school seniors will take the college entrance exam.

The seven-day average of new daily cases had reached 316.3 by the time the government kicked off stricter Level 2 measures in a five-tiered social distancing scheme Tuesday in Seoul, Gyeonggi and Incheon, also known as the greater Seoul area. Some provinces and cities outside the Seoul metropolitan area have implemented Level 1.5 measures, including the Jeolla region and Gangwon.

Under Level 2 restrictions in the greater Seoul area, restaurants aren’t allowed to receive customers after 9 p.m., though takeout is allowed, while cafes can operate normal hours but can only serve takeout. Nightclubs and bars that allow dancing are shut down, rallies involving more than 10 people have been banned and churches are recommended to hold services online. Schools have been limiting in-person classes.

The Central Disease Control Headquarters said Wednesday that 70 percent of the country’s cases, or a weekly average of 222 patients, are from the greater Seoul area, making it too early to expand Level 2 measures throughout the entire country.

On average, new patients in the Seoul metropolitan area have been relatively young. New cases among those over 60 have averaged just 50.7 during the past week.

Health authorities said that in the previous week, the highest proportion of infections was among people in their 20s, accounting for 17.8 percent of cases.

"Unlike the previous crises [the current resurgence] has no specific group to take pre-emptive measures on, and has been spreading in daily life, which is why it is important to prevent infections through social distancing,” Son said. 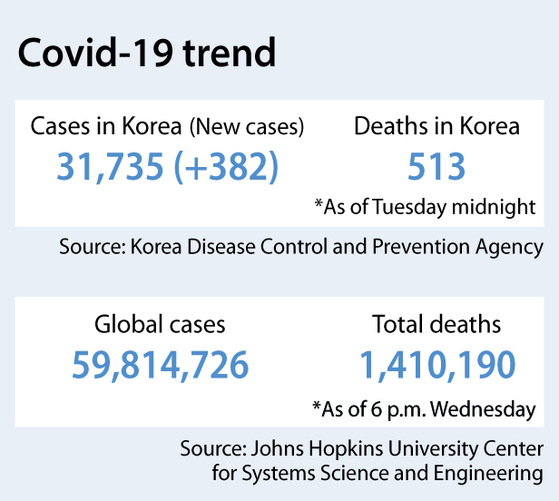 Health authorities said that there were 114 cases as of Wednesday linked to Hongdae New Church in Mapo District, western Seoul and a high school in Dongdaemun District, eastern Seoul. The first case at the church was confirmed Nov. 19, and the cluster added 88 new cases Monday. Health authorities have tested 1,027 family members and other contacts of potential patients.

A room salon — similar to a hostess bar — in Incheon's Yeonsu District has been linked to 34 Covid-19 infections so far, including a 12-year-old related to a person who visited the facility, according to Incheon officials.

The student’s elementary school is testing 260 students and faculty members.

A high school senior in the district set to take the CSATs was among three students confirmed as Covid-19 positive as well, according to local health authorities.

Gwangju city officials confirmed that as of Wednesday, 17 infections had been linked to a cluster at Gwangju Prison after an employee tested Covid-19 positive on Nov. 9.

The military confirmed Wednesday that 55 Covid-19 cases had been confirmed at an Army 5th Infantry Division recruit training center in Yeoncheon, Gyeonggi, and that 1,000 soldiers are being tested.

Busan likewise has seen a surge in cases, with another 25 added Wednesday, according to the city’s health authorities.

A cluster related to a music class in Busan added 19 new cases overnight, including 11 people who attended the music class and eight family members, according to health authorities, bringing total infections related to this cluster to 38. The music class was located in the basement and not ventilated well, and performers often didn’t wear masks properly while performing.

In Jinju, South Gyeongsang, another cluster emerged among a group of people who went to a training program on Jeju Island from Nov. 16 to 18. A group of 23 people attended the training program, 15 of whom, including a public official, have tested positive so far, along with four of their family members.

A kids’ cafe in Yongin, Gyeonggi has also led to some 80 cases, and has since spread to elderly care and day care facilities.