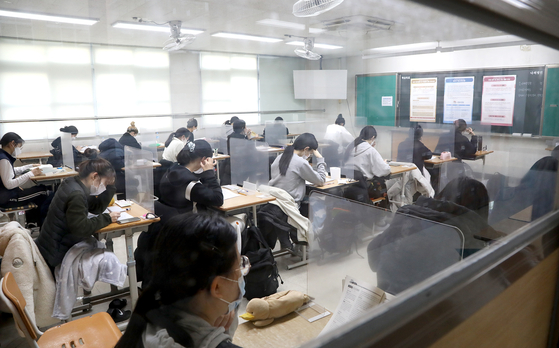 Students gather in a classroom at Daejeon Goejeong High School in Daejeon on Thursday to take the College Scholastic Ability Test (CSAT). [YONHAP]

Hundreds of thousands of high school seniors left their homes Thursday to take the annual state-administered college entrance exams, while health authorities warned test-takers to stay vigilant against the coronavirus.

The grueling eight-hour College Scholastic Ability Test (CSAT), which Korean students normally spend their entire teen years preparing for, was held across the country at nearly 31,000 testing sites beginning Thursday morning, after a two-week delay caused by the Covid-19 outbreak.

About 493,000 students have signed up for this year’s CSAT, including coronavirus patients and seniors under quarantine who took the test in special remote locations.

With the exams being held amid a pandemic, students were required to wear a face mask during the entire test period, and windows in each testing room had to be cracked open for ventilation during every break time, or about once every hour and a half.

High school students not taking the test typically swarm the front gates of the CSAT testing sites early in the morning before the exams begin to root for their seniors, but the ritual was mostly abandoned this year to avoid potential virus transmissions.

Many churches and Buddhist temples that would normally be crowded with parents praying for their children taking the tests were also silent this year, forced to either limit the number of people allowed inside or stream their services online.

The changes reverberated across the nation that saw 540 new infections of the coronavirus Wednesday, with a seven-day average close to 500.

Among Wednesday’s total cases, 516 were domestic infections, mostly from the greater Seoul area — 260 in Seoul, 137 in Gyeonggi and 22 in Incheon. As for the rest, there were 15 in Busan, 13 each in South Chungcheong and South Gyeongsang, nine in North Chungcheong, eight in Gangwon, seven each in Daejeon and North Jeolla, four in Sejong City, three each in Daegu and Gwangju, two each in Ulsan and South Jeolla and one in Jeju Island.

All of the nation’s 17 major cities and provinces added at least one new case, according to data from the Korea Disease Control and Prevention Agency (KDCA).

The remaining 24 cases were imported. Nine were from the United States, five from Russia, two from Italy and one each from Nepal, Uzbekistan, Kyrgyzstan, Indonesia, the United Arab Emirates, Ukraine, Hungary and Kenya.

Three patients died Wednesday, raising total deaths to 529, while 287 patients recovered, bringing overall recoveries to 28,352. As of Wednesday at midnight, Korea had counted 35,703 coronavirus patients in all. 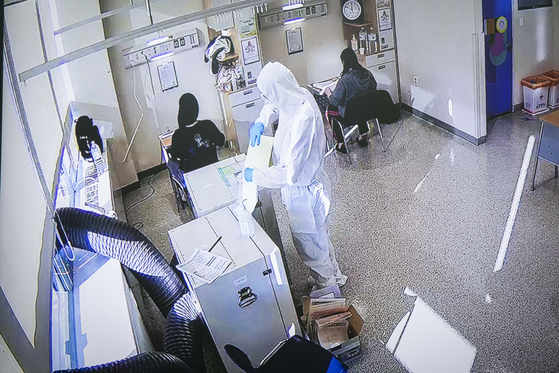 Students infected with the coronavirus take the CSAT in an isolated ward in Seoul Medical Center in Jungnang District, eastern Seoul, on Thursday. [NEWS1]


Sohn Young-rae, a spokesperson for the Central Disaster Management Headquarters, hinted in a Thursday press briefing that the current “Level 2 plus alpha” social distancing measures in the greater Seoul area will be extended for another week or so, given that health authorities were seeing no clear signs of virus transmissions in the region slowing down.

Seoul, Incheon and Gyeonggi are currently under Level 2 measures in the central government’s five-tier social distancing system, but some additional rules have been implemented for crowded facilities this week, where the virus is more likely to spread. The central government has been calling them “alpha.”

The restrictions were supposed to expire Monday midnight.

Sohn Thursday urged CSAT test-takers not to run amok after the exams, stressing the current outbreak was serious. 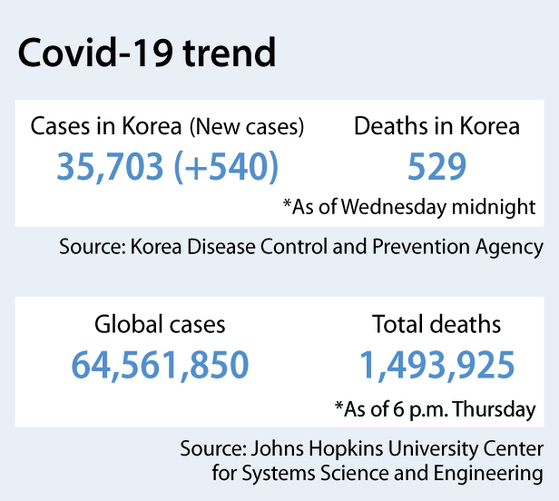 “Students will enjoy some rest after they finish the CSATs. I understand they studied for a long time, but the Covid-19 situation in the greater Seoul area is dire, so I hope they refrain from meeting with friends in large groups or talking with them for a long time in confined restaurants and coffee shops,” said Sohn.

Ahn Hyeon-sang, 39, a teacher at Keumcheon High School in Cheongju, North Chungcheong, said he was more concerned about his students taking the test of their lifetime in an unusual environment.

“My kids have to wear a mask throughout the entire test period, so I’m so worried they may lose concentration toward the end [of the test],” he said.

“My students virtually started school in April and had to receive their mock CSAT test sheets at a drive-through,” said Han. “They went through indescribable pain over the past year.”

There were some 40 students who took the CSAT in a remote area Thursday because they had the coronavirus, including an 18-year-old high school senior in Incheon who received his positive results on Wednesday at midnight. Incheon’s Yeonsu District Office said the student was transferred to Incheon Medical Center at 2 a.m. Thursday, where he took the exam later that morning.