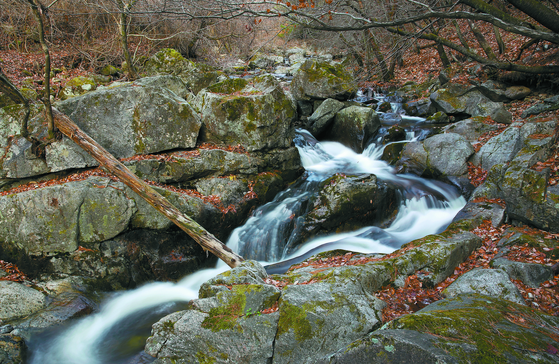 
While some wait for a sprinkle of snow before they head into nature to enjoy a "winter wonderland," the bare trails of Mount Sobaek in North Gyeongsang are just as scenic as they are with a covering of white.

This is thanks to the valleys dotted between the mountain range, especially one called gugok, which means it has nine turns.

Mount Sobaek, which has 12 trails covering about 143 kilometers (89 miles), is home to Jukgye Gugok. The particular gugok is part of the first trail that is about 12.6 kilometers long. The trail that follows alongside accounts for about one-third of the entire walk.

Gugok is derived from Confucian culture. Zhu Xi (1130-1200), a philosopher of the Southern Song Dynasty (1127-1279) who spread the word on Neo-Confucianism, is believed to have made the first reference to such valleys when he noted “Jiuqu Xi,” a valley with nine curves, in Mount Wuyi, China, in his poetry.

Many scholars of Neo-Confucianism took inspiration from Zhu Xi's poetry and began to search for similar valleys in Korea, which they would name and write poetry about. Over 150 gugok were found all across the country during the Joseon Dynasty (1392-1910).

“There are about 46 gugok in North Gyeongbuk,” said Gwon Du-hyeon, the president of the World Foundation for Confucian Culture.

“Gugok was an [inspiration] for Joseon-era scholars and provided them with entertainment by giving names to such beautiful valleys, coming up with poetry and forming [artistic] culture."

An example of some of this artistic culture comes from one of the most well-known Joseon-era scholars Yi Hwang, whose pen name is Toegye. He wrote “Dosan Sibyigok,” the title of which translates to “twelve valleys in Dosan,” in his hometown Dosan in North Gyeongsang, a copy of which still remains intact today.

There are also records of another book by Yi called "Jukgye Gugok,” although no physical copies remain. This book is said to have been written while he was serving as the county chief of Punggi, which is now part of North Gyeongsang’s Yeongju. 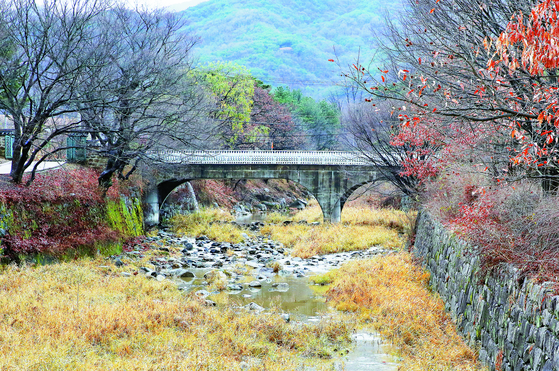 A valley next to Sosu Seowon. [SOHN MIN-HO]

The first valley of Jukgye can be seen at Sosu Seowon.

A seowon is a private academic institute for scholars to gather at and study. Sosu Seowon is the first of its kind to be set up in Joseon by scholar Ju Se-bung (1495-1554). 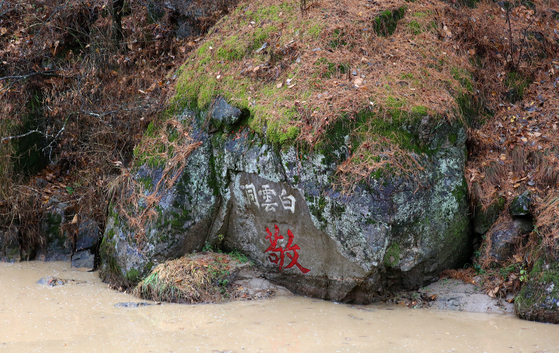 Chinese letters are used to denote the beginning of each of the nine curves of Jukgye Gugok. [SOHN MIN-HO]

The trail is lined with bamboo and features letters which indicate where the beginning of each curve is. The letters are known to have been written by Sin Pil-ha who came to the area to reign over now-Yeongju, then-Sunheung. But how Sin measured the beginning and end of each curve differs from that of Ju and Yi.

The start of the curve of each gugok should begin from a lower point and move higher up the mountain. However, according to “Sunheungji,” a record published during the reign of Joseon King Yeongjo (1724-1776), Sin denoted the beginning of the curves as if he were coming down from the top of the mountain.

“Other valleys don’t really have this kind of controversy as they are usually manned by one scholar [to name the curves after they discovered them],” said Bae Yong-ho, a board member of Yeongju Research Society, which studies cultures developed in Yeongju.

“Yet, it gets confusing for Jukgye Gugok as there are many different records that have been handed down.”

Regardless of how it was measured, the trail is beautiful. The walk will take you past a village and an apple farm before you reach a national park. From there to Choam Temple, the trail alongside the valley remains in the shade. The area is rustic without any hints of human touch, as it is not easily accessible. 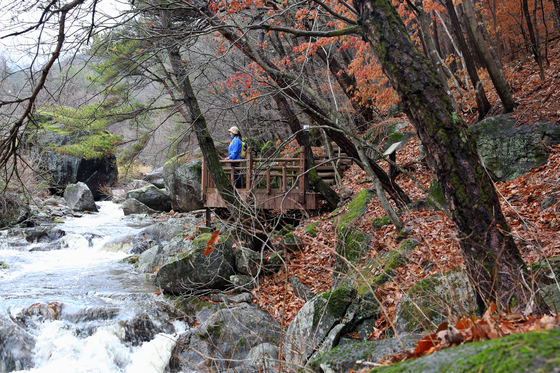 A visitor to Jukgye Gugok stands near the creek. [SOHN MIN-HO]

The fifth curve from the starting point is named Mokyokdam. Mokyok means taking a bath in Korean. The curve got its name as there are multiple round ponds where people can bathe. The larger ponds can fit about six to seven people.

Along the walk up to the seventh curve you will be able to see a waterfall, and while you continue on to the eighth, you will spot some large, flat rocks surrounded by flowing water. En route to the ninth curve, you'll see where two waterways meet to become one.

In between each big curve, there are small valleys that provide plenty of scenic nature. At the end of the ninth, the Jukgye Gugok comes to an end. Here is where you'll find the forest trail that takes you deeper into the mountain.

It is said that scholars would come to Jukgye Gugok to meditate while peasants would come looking for a place to hide or in search of food.

No matter what your reason for the hike is, the mountain can hopefully offer some comfort. 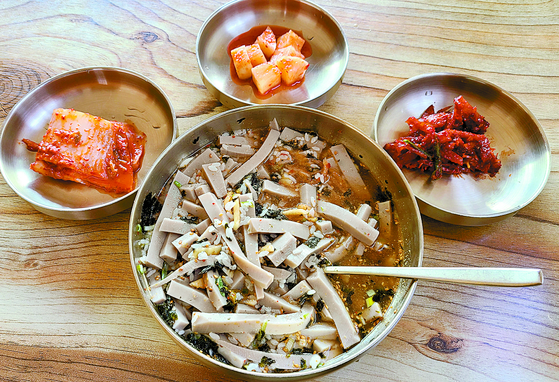 A bowl of acorn jelly can be easily found at restaurants in the village right outside Mount Sobaek. [SOHN MIN-HO]


And don't forget to fill your stomach up from the walk with some acorn jelly available at Sunheong Village, outside the mountain area.

NCT 127 to continue 'Neo City – The Link' tour in Southeast Asia, the Americas