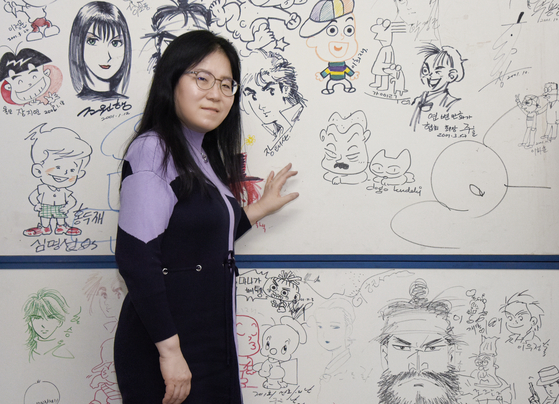 Cartoonist and President of the Korea Cartoonist Association Shin Eel-suk poses in front of a collection of drawings by Korean cartoonists at the association's office located in Seongsu District, eastern Seoul, during an interview with the Korea JoongAng Daily. [JEON TAE-GYU]


A fun fact about Lineage, one of Korea’s oldest but still most popular online role-playing games (RPG) published by NCSoft, is that it is based on a comic book series with the same title by Shin Eel-suk.

“One day, I had a dream where I was reading a comic book,” said Shin. “I woke up and drew what I saw, and that was how ‘Lineage’ was born. The more details I added into the story and the more its world expanded, I felt like it was coming to life.”

“When NCSoft first told me they wanted to make ‘Lineage’ into a game, games weren’t so popular back then,” she said. “I didn’t know much about games, so I just thought, ‘I wonder how they’re going to make this into a game.’ But it turns out, they had everything planned in their minds.” 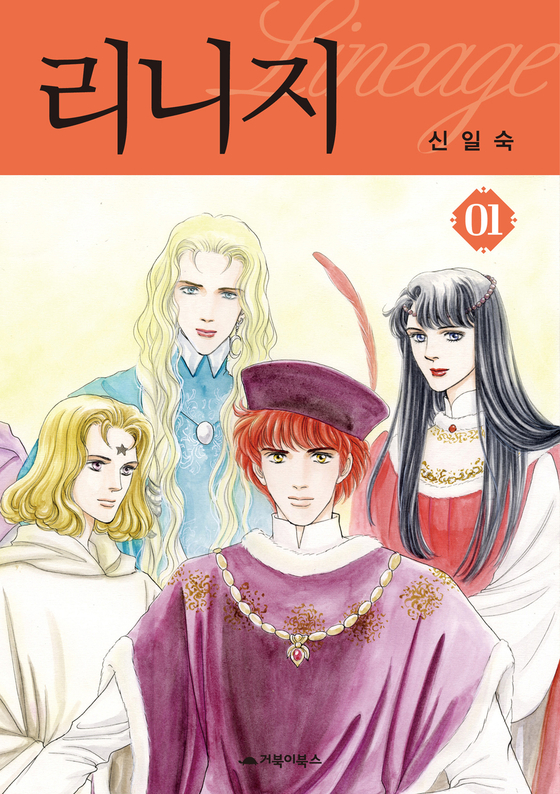 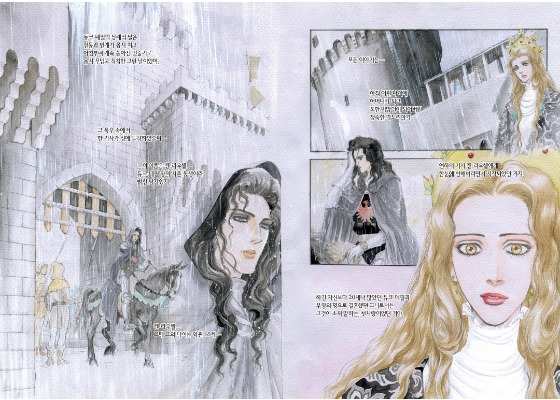 
“Lineage” starts with the story of young Prince Depardie who must fight his way back to his kingdom of Aden to reclaim his rightful throne from the half-king Defil, after the queen and the prince’s mother Gadria hides him in the forest to keep him safe from her ambitious new husband. With the help of his loyal knights and warriors who are bound by blood pledge, Depardie fights through battles and triumphs to grow his own army and sets off in his final war against King Defil.


The Lineage game, the first internet-based game in Korea and an MMORPG (massively multiplayer online role-playing game) released in 1998, begins with the player choosing a character’s class from the categories of Elf, Dark Elf, Knight, Prince, Magician, Dragon Knight or Illusionist — the characters from the book. Only a prince can form a blood pledge, which is the game’s term for a clan or guild, and lead castle sieges and battles against other clans to eventually take the throne. 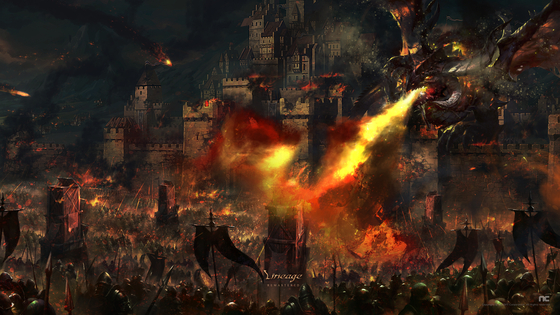 A concept art image of the game Lineage [NCSOFT] 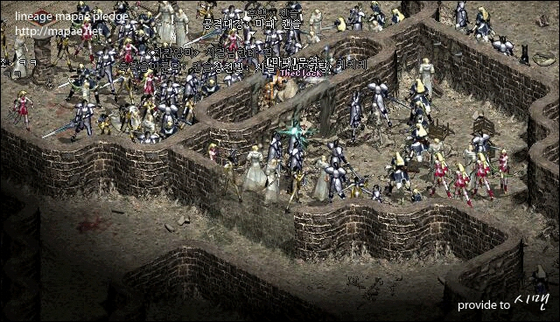 A captured image from the game Lineage [SCREEN CAPTURE]


The unique features of the book are what make Lineage stand out as a game in comparison to its MMORPG kin, and the popularity of the first game led to the release of its descendants Lineage II in 2003 on PC version as well as mobile games Lineage 2 Revolution in 2016, Lineage M in 2017 and Lineage 2M in 2019. Shin says she played a lot of them and clearly remembers the very first time she played.

“It felt like I was in a different world,” she said. “The people were forming new relationships with each other and living in a world according to the law set out within the game. I felt like it would have been how people lived during medieval times.”

Shin is the president of the Korea Cartoonist Association and is recognized as one of the most respected cartoonists to this day. Her works make her a living legend in the field of cartoons and comics, but it’s not just her past achievements that make her worthy of her presidency. She also has a sci-fi webtoon series titled “Kaya," the plot of which takes place in a mystical planetary system ruled by a supernatural force, which she started in 2017 on Kakao Page.

Platforms may have changed, but the creator's passion remains. Shin sat down with the Korea JoongAng Daily to talk about Lineage, cartoons and their future in webtoons. The following are edited excerpts. 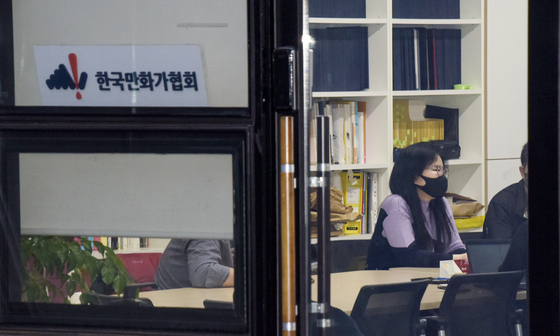 Cartoonist and President of the Korea Cartoonist Association Shin Eel-suk sits down for an interview with the Korea JoongAng Daily at the association's office located in Seongsu District, eastern Seoul. [JEON TAE-GYU]

When Lineage first came out as a game, did you try playing it yourself?


Yes. I have a few max-level characters of my own.

Back then, computers were really crappy and the internet was so slow. I tried the game, but it would freeze every five minutes for a few seconds, and my character would die. People told me it’s better at internet cafes, but it was more or less the same. I thought the game wasn’t going to get anywhere unless they do something about this, and they did do something about it. I bet that NCSoft is the best at fixing lags in games. 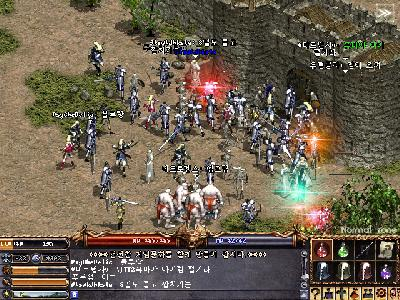 What did you find was most intriguing about the game?


I find the first Lineage game to be the best. I tried other games afterward, but nothing beats Lineage I. The best thing about it is that you don’t have to be good at games. There’s not much technique needed — just time and effort. Usually if a game is hard, then teenagers and younger users take over and the older people are forced to leave, but it’s the older people that are still left playing Lineage. Us old people take a longer time to type in “hello” if we see a new member in our blood pledge, but we would already be dead by the time we’re done typing in other games (laughs).

The interesting part of the game came from the story of Lineage — namely the castle siege battles and the blood pledge system. I used to be a ruler of a blood pledge but our pledge was a little different. It was usually the case that the bigger the pledge and the more users it had, the stronger it was and the higher the possibility was of winning battles. We were outnumbered, but we studied the time when the least number of people were online and struck when they least expected it.


It's been reported that there was a conflict between you and NCSoft over the copyright of Lineage in 2001. How did that work out? There were rumors that you were given company shares worth billions of won and a position on the board of directors. Is that true?

The case was a battle between the primary and the secondary creator, but it was a time when people didn't think much of comic books. It may have been more so because I was a romance comic author, but anyway as the case proceeded, NCSoft came to me and we settled on our rights. As for the rumor, I was given a stock option and a position as the company’s adviser, but not the billion won worth of shares or a place on the board. Nobody came to me and asked about this before, so I didn’t even know that there was such a rumor.

How was your transition from paper comics to webtoons?


Not very difficult, actually. The only thing I did think about when I started on “Kaya” was whether I should draw it with the idea of having it printed on paper in mind, or just totally discard that idea and create it as a webtoon. I decided to go for a completely webtoon format even if I had to re-edit everything when and if it does come out on paper.

I’ve never actually had a hard time because of the work. It’s always been money and the people. I think that this is the job for me, because working and creating never stressed me out — not even the deadlines. I often get my inspiration in my dreams so creation wasn’t what stressed me. Or maybe I even enjoyed the pain.


Would you say that people are more aware of cartoonists these days?


They are, definitely in relation to webtoonists, but maybe not so much for cartoonists. The prevalent notion was that cartoons were drawn easily and made easy money and that money came from the pockets of little kids. People just thought low of the entertainment culture. Cartoons are just different, perhaps more popular forms of art, but people thought they were cheap and lowly.

It’s easier for people to debut as webtoonists and that’s led to more work, and naturally, more people enjoying them. Luckily, I’ve never had anyone think that I made my work “easily,” but I think that the more people who bring good work to the market, the better the culture gets. I think creators are like gems — there are a lot of them in different variations. There are crystals, sapphires, rubies and diamonds. There are different kinds and it’s about making them stand out in their own way, not about making them the same. 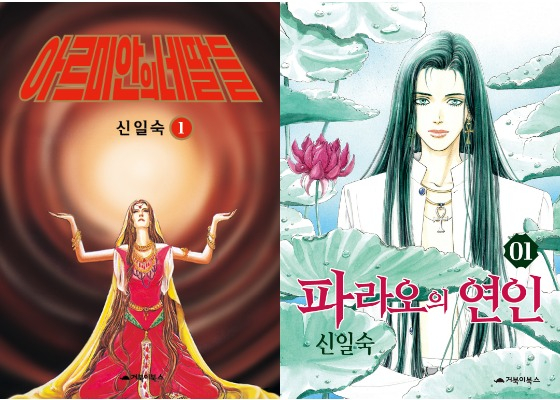 What are your goals as the president of the Korea Cartoonist Association?


People come into this field with different goals in mind. It could be money, or something else. But whatever you have in mind, you have to see for yourself whether you’re right for the job or not. You might succeed or you might not, but you have to know for sure that it’s what you want and what you’re passionate about. You have to come in thinking that it’s going to take a lot of time until you do succeed, but I want to say candidly that it will very likely not bring you money. Only a handful of people make “a lot” of money, so I hope you start with the goal of making good work, not money.

As the president, and the other members of the board also agree with me, my main goal is to make it easier for people who start as authors to be able to make a living out of their career if they've started. There are people who aren’t cut out for the job, but it should be possible for everyone to earn a decent amount to survive until they find out for themselves. There’s honestly not much for us to do for the star authors, but for everyone else, our goal is to make an environment where they don’t have to starve to make their work.