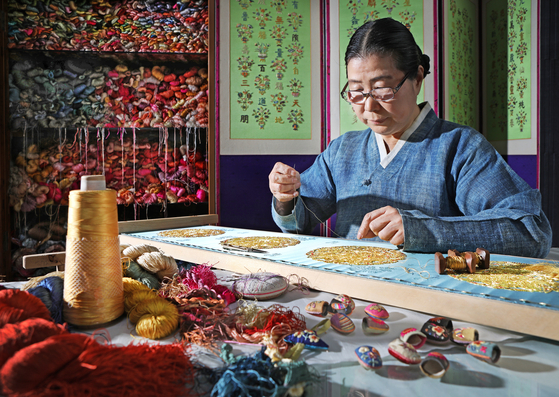 
Since the beginning of human civilization, embroidery has developed independently in different regions based on living conditions, customs and beliefs.

The 63-year-old artisan is known as one of the master embroiderers in Korea but has been walking a lonely path for the past 44 years. She entered into the career by becoming a student of late artisan Kim Tae-sook, who was the first chairman of the Korean Embroidery Association. Yoo had asked Kim to accept her as a student after seeing Kim’s works at an exhibition held at a Lotte Department Store over 40 years ago.

Due to her poverty-stricken family background, she couldn’t receive a formal education at a proper age like other students. At age 19, when other girls her age would have finished high school and started thinking about going to college, she could do neither. (Yoo became a university freshman at age 37).

But Yoo says she found joy in life through embroidery artifacts. Little, helpless thoughts faded away each time she sewed, she said, and she felt as though her spirit was being elevated.

As she gradually fell into the charm of embroidery, she began to feel hopeful about her future and believed she could have a successful life even without a diploma. To achieve that, she says she polished her skills by staying up late many nights.

After learning Oriental embroidery from Kim for more than four years, Yoo thought herself to be the best embroiderer, at least technically, and decided to challenge herself by competing in an embroidery competition.

But after failing to win a single prize, she was left in shock. With no time to waste, Yoo quickly returned to the craft, and that was when she encountered traditional Korean embroidery works of the late embroidery master Han Sang-soo, who was the holder of Intangible Cultural Property No. 80. Under Han, she finally acquired traditional techniques of Korean embroidery.

An old military uniform belt, which was embroidered after referring to the Portrait of King Cheongjong (Treasure No. 1492), is housed in the National Palace Museum of Korea in central Seoul. [PARK SANG-MOON]


After mastering both Oriental and Korean traditional embroidery, Yoo was finally recognized as a master artisan in the Korean embroidery circle after 26 years. However, she says the recognition made her agonize deeply, as she feared she may become conceited and take the wrong path.

To remain humble, she set herself the task of embroidering 108 thimbles. (Doing something 108 times in Korean Buddhism is a meditative practice that encourages reflection and concentration). However, she found her mind was still not at peace and so she began working on embroidering an image of “Juakbicheonsang,” which means “Two Flying Fairies Playing Music,” a piece for which she used her own hair as thread. 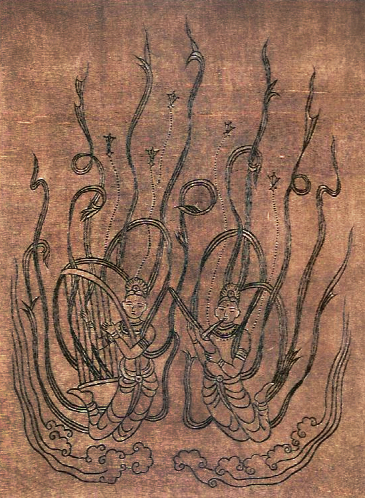 
Yoo says she hasn’t had a haircut in over 30 years. In 1986, after seeing Buddhist embroidery works that used human hair for threads during the Goryeo Dynasty (918-1392), she stopped cutting her hair. Yoo said she finally regained her composure after completing the piece and was able to focus on restoring traditional embroidery.

Korean traditional embroidery has its own unique techniques that are very different from its Chinese, Japanese and Western counterparts. Unlike the Western artisans who use cotton thread, artisans from Korea, China and Japan use silk extracted from cocoons. China, Japan and North Korea commonly use a thin thread called poonsasil to create realistic works. Poonsasil refers to a thread that is not twisted when it is extracted from a cocoon, allowing artisans to create realistic works, though embroidery with poonsasil can easily be damaged.

Korean embroidery during the Joseon Dynasty had unique characteristics — the use of 36 strands of silk thread that were twisted together to form a single stitch.

To create the stitch of 36 strands, 18 strands of silk thread are first twisted into two strands which are then twisted together. Such a technique only existed during the Joseon Dynasty and is still unique in the world.

Embroidery works using this jaritsu technique are said to create a finer and more beautiful look compared to works using other types of threads. The reason Korean traditional embroidery reached its apex during the Joseon Dynasty was because it used the 36-strand thread technique, rather than poonsasil, to create embroidery works for the royal families. During this time, the royal embroidery and the general embroidery for commoners both flourished as if they were competing against each other, creating a culture of embroidery.

Yoo has played a major role in promoting traditional Korean embroidery across the world. In 1999, when Queen Elizabeth II visited Korea, she created a shawl with the queen’s name embroidered in Korean as well as a sitting cushion on which she sat on during her 70th birthday celebration held in Andong, North Gyeongsang. 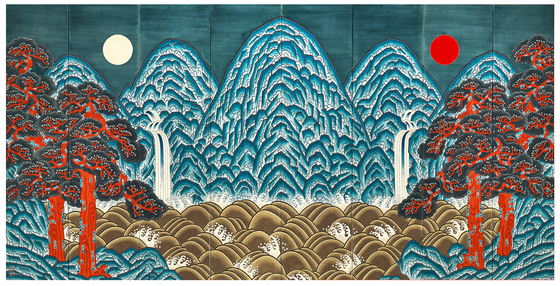 The eight-panel folding screen features ilwolobongdo, the famous depiction of the sun, moon and five peaks that symbolize power and eternity, which was placed behind the king’s thrones of the Joseon Dynasty. The embroidery was done by Yoo to decorate the room where the Asia-Pacific Economic Cooperation Summit was held in Busan in 2005. [PARK SANG-MOON]


Yoo also made the largest embroidery piece in Korea that decorated the room where the Asia-Pacific Economic Cooperation Summit was held in Busan in 2005. Her embroidery on the eight-panel folding screen features ilwolobongdo, the famous depiction of the sun, moon and five peaks that symbolize power and eternity. Drawings of ilwolobongdo were often placed behind the throne's of the king's of the Joseon Dynasty. The work used 12 kilograms (26 pounds) of silk and measures 624 centimeters in height and 348 centimeters in width.

In 2007, she also participated in creating the casings for the royal seals of Korea. In the work involving 29 top craftsmen in each field, Yoo joined the team as an embroidery master. Her role involved creating traditional embroidery on the cloth that the seals are wrapped in as well as the leather pouch they are stored in. Her involvement was evaluated as the completion and the essence of traditional crafts. 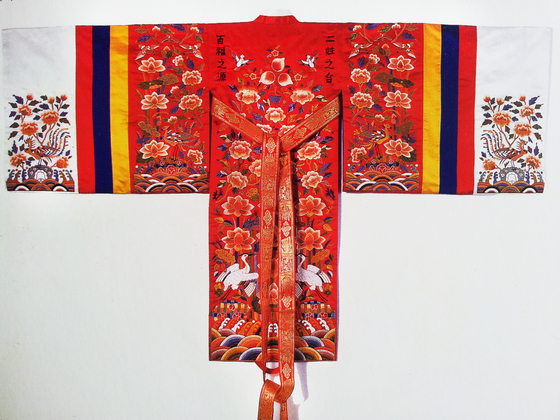 Princesses’ royal robes during the mid and late Joseon Dynasty were embroidered with various colors and patterns, a symbol for longevity and good fortune. [PARK SANG-MOON]