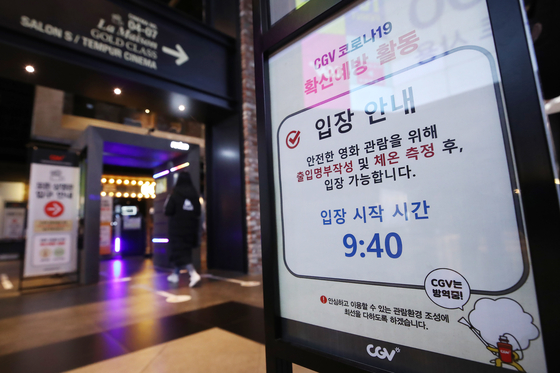 A sign posted in front of a movie theater which requires audiences to check in using a smart attendance system and to measure their temperatures. [YONHAP]


The total revenue for this year’s local film industry is expected to hit a record low due to the coronavirus pandemic.

According to a report from the Korean Film Council (Kofic), the 2020 revenue from cinemas, online video sales and overseas sales is expected to reach an estimated 913.2 billion won ($837.3 million), a decrease of 63.6 percent from the previous year.

It's likely to mark the first time yearly revenue will fall below 1 trillion won since the council started to compile data in 2004.

The figure topped 2 trillion won for the first time in 2014 and continued to climb until it reached a record high of 2.5 trillion last year.

By category, the revenue of local movie theaters is expected to fall 73.3 percent compared to last year to 510 billion won from 1.9 trillion won last year. Until last month, the total revenue compiled to 498 billion and this month’s forecasted revenue is 1.23 billion.

Revenue for overseas sales is expected to reach 39.4 billion won, down by more than 50 percent compared to last year’s 86 billion.

Digital online sales is forecasted to mark 363.5 billion, down from last year's 501 billion.

The pandemic has also affected 135 film productions and releases this year with damages estimated at 32.9 billion won, according to the Kofic survey.

Out of 423 theaters at chains CGV, Lotte Cinema, Megabox and Cine Q, 200 theaters have closed between March and April this year.

When will the rain stop? (KOR)